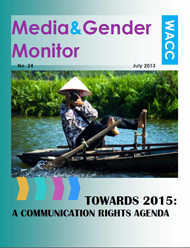 Media and Gender Monitor is a bi-annual publication from the WACC’s Media & Gender Justice Programme distributed to more than 3,000 individuals and organisations worldwide. It aims to articulate the concerns of the WACC’s Media & Gender Justice Programme from global, regional and local perspectives and address a wide range of gender and communication issues.

Issue 24
Awareness about different aspects of women’s communication rights has grown remarkably during the past two decades. Civil society initiatives at the same time continue to break new ground, and the current issue of Media & Gender Monitor (MGM) profiles illustrative work by WACC’s project partners in Asia, Africa, Latin America and Eastern Europe. Vigilance is necessary to ensure that communication rights, for women and marginalized groups especially, secure space and remain on the agenda in the processes underway, in the lead up to the 2015 events of the Beijing +20 review, adoption of a post-2015 development framework and the World Summit on the Information Society (WSIS) 15-year review.

Issue 23
This issue of Media & Gender Monitor presents case studies of civil society experiences in working with media. A remarkable one from Ecuador demonstrates how a grassroots organisation has mobilized the citizens of an entire city — local government officials and media included — to participate in the Citizens’ Communication Observatory running since 2004. Also profiled is the work of WACC partners in Africa, Asia and Latin America undertaking innovative projects to advance gender-responsive media practice, resources to support media monitoring, policy change advocacy and spaces available for networking. Also media practitioners now have at their disposal a unique resource kit to help build expertise in integrating gender ethics in their practice of professional journalism.

Issue 22
The current issue of Media and Gender Monitor (MGM) brings together action plans emerging from the GMMP findings. The plans highlight specific actions for each set of change agents—media decision makers, practitioners, journalism training institutions and civil society groups, among others. The global action plan is intended to accelerate the pace of change as well as also re-direct progress to areas of media policy and practice that constrain advancement towards more gender-just news media. The regional action plans underscore areas identified as key for special follow-up by the respective GMMP networks. In this issue as well are stories of some of the ways in which the networks continue to demonstrate their commitment to the plans in practice.

Issue 21
The current issue of Media & Gender Monitor contains highlights of the prelimnary results of the Global Media Monitoring Project. The complete report is available for download at www.whomakesthenews.org. Definitive results from all participating countries will be published later this year, in September.