An overview of the situation 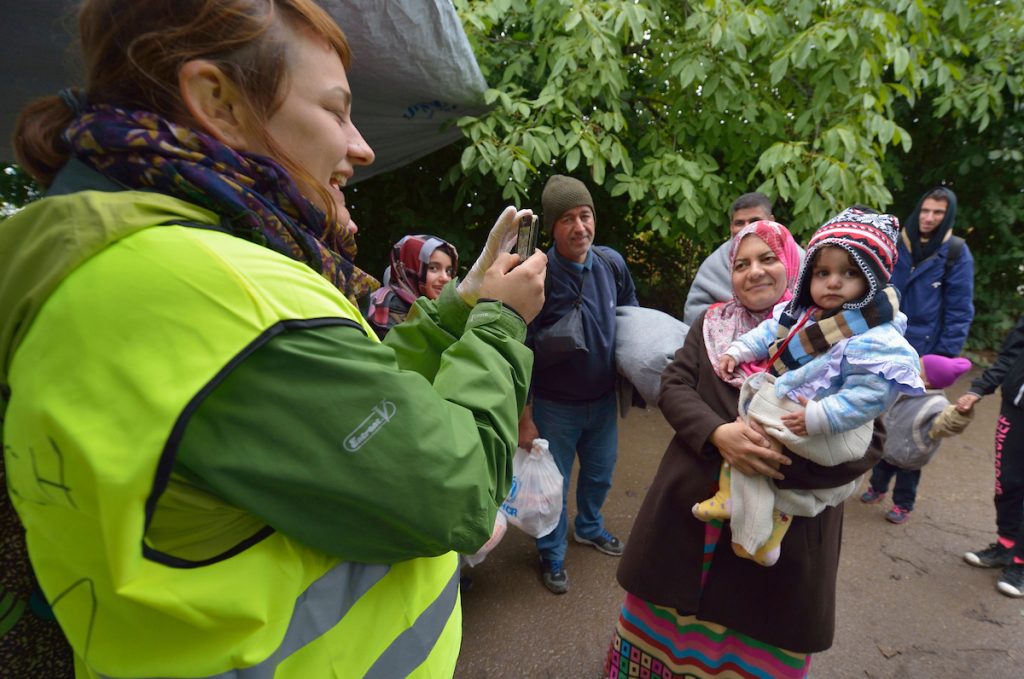 A Czech volunteer uses her phone to take a photo of an Iraqi refugee woman and her 18-month old daughter, Mahdi, as they approach the border into Croatia near the Serbian village of Berkasovo. Hundreds of thousands of refugees and migrants from Syria, Iraq and other countries have flowed through Serbia in 2015, on their way to western Europe. The ACT Alliance has provided critical support for refugee and migrant families here and in other places along their journey.

There are about 281 million international migrants in the world, according to the latest available data. This amounts to 3.6% of the global population, and while the percentage is a minor increase from 2.8% in 2000, the overall number remains stable. Within this number, 55 million are internally displaced people, 26.4 million are refugees, 3.9 million are displaced Venezuelans, and 4.1 million are asylum seekers.

The number of people who migrate internally however, is much higher. In 2009, an estimated 740 million people migrated within their countries, without crossing an international border. Data on internal migration is much harder to come by.  The “internal migrants” category includes those who are forcibly displaced but do not cross a border: about 45.7 million people are internally displaced, as of December 2019.

Within the 272 million international migrants, 48% are women, and 14% are under the age of 20. Some countries host greater shares of migrant population than others: the United States  hosts the largest number of international migrants (51 million), about 19% of the world’s total. Germany and Saudi Arabia host the second largest numbers of migrants (13 million each), followed by the Russian Federation (12 million), the United Kingdom (10 million), the United Arab Emirates (9 million), France, Canada and Australia (around 8 million each) and Italy (6 million).

How much is migration reported by media?

What the numbers above tell us, is that while the migrant population is an important percentage of the world population, it is by no means an overwhelming population. This may seem at odds with the perceived importance and “flammability” that the topic of migration sometimes appears in the news.

We know that news media follow events as they unfold. We are aware  that the news cycle is fast, that events follow each other in rapid succession, and that equally fast, they become less relevant, and they disappear just as easily from our screens and newspapers.

A clear example of this was the so-called “refugee crisis” in Europe in 2015. In a relatively short period, thousands of refugees and migrants crossed from Turkey into Greece, on their way to other European countries. News organisations were quick to move their reporters to the ground, as developments unfolded daily. However, just as quickly, the interest faded,  overtaken by other events  on the continent.

A study published in 2020 which analysed media coverage of migration in 16 European countries (and the USA) between 2015/2016 and 2017/2018, noted a remarkable difference between the two periods of analysis. The  largest number of articles on migration was during the first period. By the time of the second period of observation, the interest had waned.  .

What is the role of media?

Journalism is traditionally understood as the “gathering, reporting, dissemination of news and information in the public interest”. Journalism and the media have a fundamental role and responsibility to help people understand the world around them.

The advent of the internet, and of social media especially, has blurred the boundaries of  traditional journalism –  people can now participate in the production and sharing of information. However, journalism still plays a major role in helping people perceive the world around them, and in shaping their perceptions.

Migration has become a very important topic over the past 5 to 10 years, and is  likely to remain a major topic in social and political discussions around the world. How media presents migration has a strong influence on the public’s perception of the topic. In other words, “the way media (and other actors such as politicians or other influential persons) frame information can strongly influence and possibly change how society perceives a certain topic or story.”

As the Ethical Journalism Network wrote in a 2017 report, journalism can be as much a distorting lens as a magnifying glass: “it can expose inhumanity and corruption in the way that migrants are treated, [or it can] follow an agenda that inspires discrimination and hate that intensifies the suffering of the victims of migration.”

Given the power of media coverage in shaping understanding of migration, it is important to examine media reporting of the issue.

How does media cover migration?

The interest in media coverage of migration spiked over the last 10 years, and numerous studies have been carried out to analyse the representation of migrants and refugees. The vast majority of these studies however, focus on the “Global North”, and especially on Western Europe. For other parts of the world, in-depth analyses are few and far between.

The fact that the subject seems to be approached mostly from the point of view of so-called “countries of destination” can suggest that migrants and refugees are less present as topics in “countries of origin”, possible because they are not perceived as a newsworthy topic.

Research carried out in 2017 by WACC Europe and the Churches Commission for Migrants in Europe, which analysed the media coverage of migration in seven European countries (Refugees Reporting) found that less than a quarter of the stories analysed referenced an actual refugee, migrant or asylum seeker. The 2020 study by the Otto Brenner Stiftung in collaboration with the European Journalism Observatory, found  a similar result: less than a third of the articles analysed in the study sample focus specifically on persons with refugee status, and even less on migrants. It also noted how refugees and migrants are more likely to be depicted as a group, rather than individuals.

Another research conducted by the Ethical Journalism Network in 2017, which analysed  media coverage in 17 countries on both sides of the Mediterranean basin, found that “in a majority of the countries covered by the study media fail to give adequate voice to migrants themselves and often media reporting relies too heavily on single, official sources of information.”

A 2018 media monitoring studyin Nigeria analysed the representation of internally displaced persons (IDPs) in the country’s print and online media and found similar patterns of low representation: stories about IDPs are few, and when journalists cover the issue, they do so from a rather superficial point of view, not providing context or background information, and avoiding explanation of the real issues affecting IDPs in the country, such as the lack of provision  of  basic  amenities,  access to health centres, sexual harassment and human right abuses.

“Sometimes IDPs are portrayed in media reports as helpless citizens who have no rights and who are left to the mercies of humanitarian and relief agencies. In most reports, the emphasis [emphases? Plural] are usually on the activities of the donors and government officials, with an assumption that whatever is being done, is fit and properly and adequately meet the needs of the IDPs,”  the study found.

When individuals are given a voice in news about migration or asylum, it is often those who are not migrants or refugees who speak. Politicians – whether at the national, regional or international level – are the majority of news sources who speak, and politics is usually the frame in which migration is addressed. . This finding is shared by Refugees Reporting as well as by the IDPs monitoring study from Nigeria, which found that “the use of government officials/spokespersons as main source of stories was predominant in virtually all the reports across the media monitored. Although there  was  diversity in  the  use  of sources,  the  analysis  clearly  indicated  that the  media  largely  depended  on government  sources  for  information  on  what is reported as news about IDPs.”

According to a study by People in Need, “media coverage of migration is often biased, superficial, simplifying, using insufficient or bad sources, and only following the dominating narrative presented by political elites and expected by the audience”. Media often misses the chance to present the phenomenon of migration in its complexity, reporting  it instead overwhelmingly as a problem.

The Otto Brenner Stiftung study found that the majority of articles do not specify  the country of origin of migrants and refugees. Migrants and refugees are often only identified in terms of their migratory movement, as if that was everything the audience needs to know about them. Often media misses the chance to provide a background and a context for the migration, simplifying the narrative to create or perpetuate  stereotypes.

According to the Refugees Reporting study, almost two thirds of the news analysed did not identify any profession for migrants and refugees, simply labelling them ‘”refugee’”or “migrant”.

On both sides of the Mediterranean, “much of the media coverage of migration reflects political bias and is superficial, simplistic and often ill-informed”, said  the Ethical Journalism Network. Two major narratives are often found: either the “victim” migrant or refugee, or the “threat” migrants or refugees pose to host countries.

Findings from South Africa paint a similar picture, with evidence that media in the country portrays immigration “as a threat to the livelihoods and economic well-being of local communities”. Media further appears to create strong associations of migration with “illegality”, “undesirability”, and even “crime”.

Analysis from South America  also found media representation of migrants as a ‘”threat”.Examples are articles which highlight the nationality of a “foreigner” committing a crime, while media coverage of a similar crime by a citizen of the country will not mention their nationality.

This type of representation belongs to a securitisation paradigm, where migrants are framed as a national security problem, a threat to the cultural, economic and social life of the countries where they arrive.

Speaking about a “migration crisis” sets off an alarm bell – among readers and in society. On the other hand, media could use the opportunity to frame migration as a global phenomenon which touches every country, and which is an indispensable component to the development of life, culture, language, and the economy.

The next section will analyse arguments in favour of a more balanced media representation of migration.

Who is a migrant?

Migrant population in the world
Infogram

Who is a refugee?

The term “refugee” is defined and protected under international law. A refugee is a person “who is unable or unwilling to return to their country of origin owing to a well-founded fear of being persecuted for reasons of race, religion, nationality, membership of a particular social group, or political opinion,” according to the 1951 Refugee Convention, a key legal document. The United Nations High Commissioner for Refugees (UNHCR) is the UN agency responsible for refugees worldwide.