Posted at 12:19h in News by Solange De Santis 0 Comments 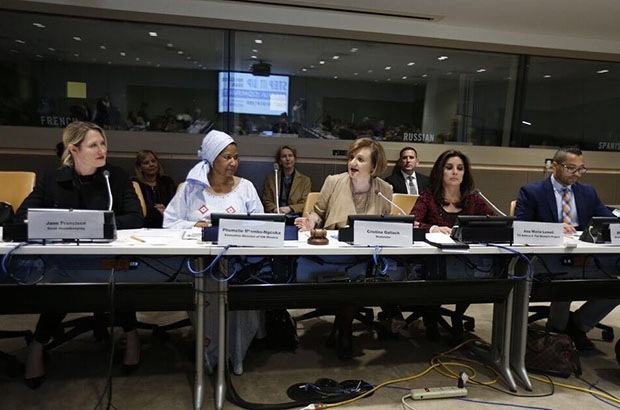 U.N. Under-Secretary-General for Communications and Public Information Cristina Gallach leads a panel discussion at the launch of the Step It Up Media Compact. UN Photo/Ariel Alexovich.

U.N. Women on March 22 introduced an agreement signed by 39 media organizations vowing to scale up their focus on women’s rights and gender equality issues through editorial coverage and decisions, complemented by gender-sensitive corporate practices.

The launch of the Step it Up for Gender Equality Media Compact was accompanied by a panel discussion scheduled as a side event at the U.N. Commission on the Status of Women meeting in New York.

WACC General Secretary, the Rev. Dr. Karin Achtelstetter, attended the session and noted in an interview afterward that according to WACC’s 2015 Global Media Monitoring Project “women make up only 24% of the persons heard, read about or seen in newspaper, television and radio news, exactly the same proportion as in 2010.”

The media compact envisions that each media outlet will define for itself how best to implement the partnership. However, the minimum commitments include:

2) ensuring inclusion of women as sources in stories, aiming for gender parity, including across diverse subjects such as business, technology, science and engineering;

3) enabling equality in the newsrooms by ensuring women journalists are given similar opportunities as their male colleagues and can cover diverse subjects from politics to business, science, sports and technology, while encouraging male journalists to also cover diverse issues, including women’s rights and gender equality stories.

Mlambo-Ngcuka invoked the image of backup singers, saying that “we need more women in roles projected in the media who can speak and say intelligent things. Women don’t want to be the ‘oohs’ and ‘aahs’ all the time.” Pointing out that 39 media outlets signed on to the compact, she added, “take this message back and encourage more media outlets to come on board.

Lomeli said that Mexican media often still portray women in general as housewives, or they are more likely to be shown partly clothed and as sexual objects. However, TV Azteca has provided an opportunity for women to speak out with its show “What We Women Keep Silent,” which has been on the air for 15 years and is shown in 45 countries, she said.

Another initiative, called the Women’s Project, aims at “the elimination of violence against women and fair representation of women in media,” she said.

Francisco said that although Good Housekeeping just celebrated its 130th anniversary, it hired its first female editor-in-chief 30 years ago, so “for 100 ears, a man was leading that conversation.” Now, the magazine’s top staff is nearly all female and the scientists, chemists and engineers at its product-testing institute are mostly female, she said.

Although the magazine generally covers the domestic world, it does “have the opportunity to highlight women in leadership,” which makes readers “feel empowered to act themselves,” she said.

Bryce-Pease said that the SABC has gone from a broadcast network essentially led by only white men to a place where 47% of the staff are female and 53% men. As change came to South Africa in the early 1990s with the end of apartheid, the rise of Nelson Mandela and a democracy more representative of the population, SABC changed also, he said.

SABC was “ahead of the curve,” but with just three women on its 10-member board of directors, “there’s more work to be done,” Bryce-Pease added.

In response to a question about creating gender equality on social media, Francisco said it represented a different paradigm from traditional media companies. “There is no one in charge but there is also no male boss … Anyone of us have the opportunity to create opportunities, start a conversation. Even very young girls are finding a voice,” she said.

Bryce-Pease pointed out the example of a sexist Bic pen ad that was withdrawn after an outcry on social medial. “You have the power,” he said.

UNCSW is the principal global intergovernmental body exclusively dedicated to the promotion of gender equality and the empowerment of women.