6th GMMP: No country in the world meets the mark on gender equality in news content
37498
post-template-default,single,single-post,postid-37498,single-format-standard,theme-bridge,bridge-core-3.0.1,woocommerce-no-js,qodef-qi--no-touch,qi-addons-for-elementor-1.5.6,qode-page-transition-enabled,ajax_fade,page_not_loaded,,qode-title-hidden,columns-4,qode-child-theme-ver-1.0.0,qode-theme-ver-29.2,qode-theme-bridge,qode_header_in_grid,qode-wpml-enabled,wpb-js-composer js-comp-ver-6.10.0,vc_responsive,elementor-default,elementor-kit-41156 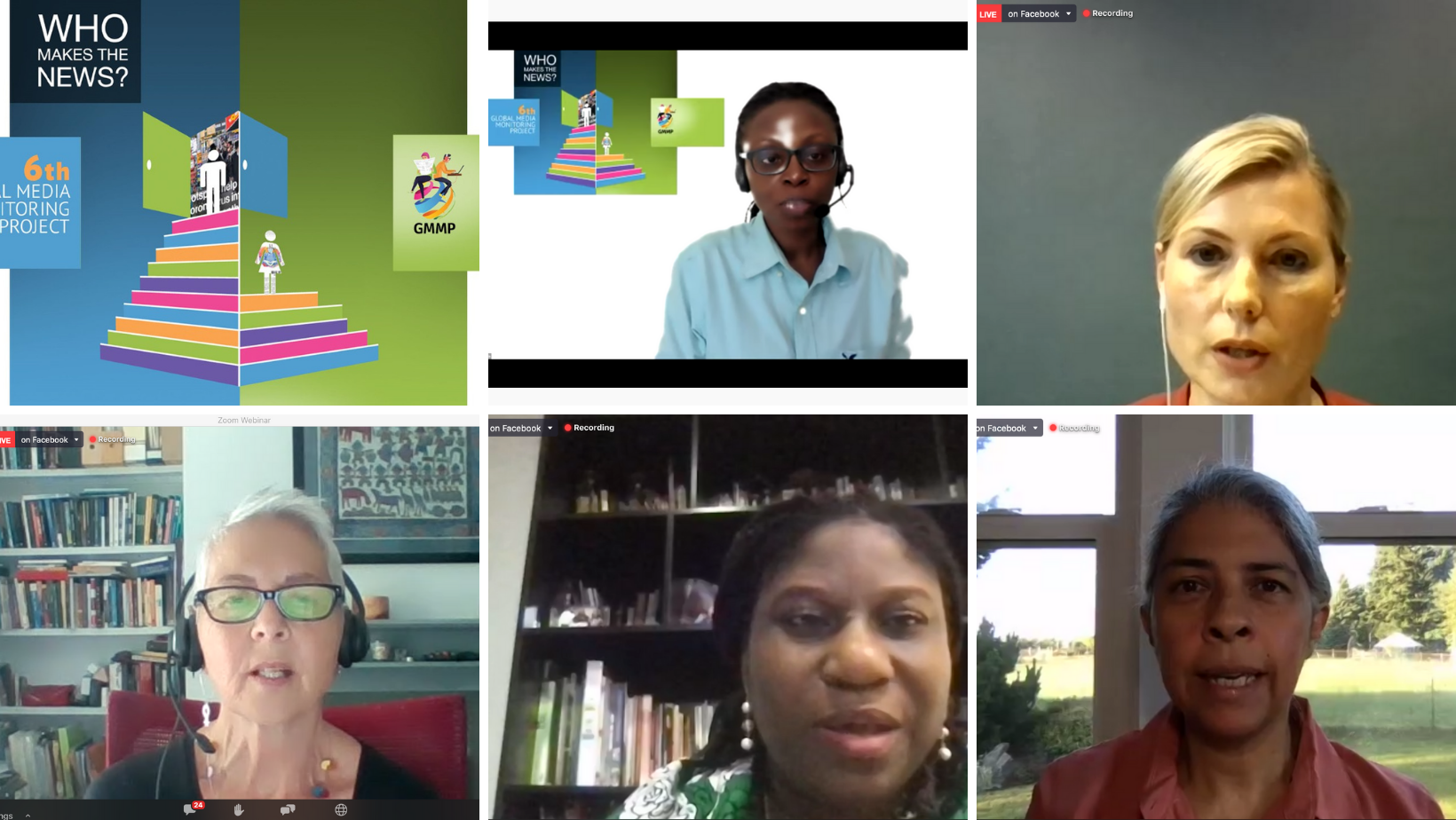 15 Jul 2021 6th GMMP: No country in the world meets the mark on gender equality in news content

No country or region in the world has achieved gender equality in terms of people portrayed as subjects and sources in news content, said feminist scholar Sarah Macharia, who shared the results of the 6th Global Media Monitoring Project (GMMP) during an online launch July 14 attended by more than 200 participants worldwide.

However, for the first time since 2010, “there appears to be a slight upward movement” in the proportion of stories that have women as subjects and sources, said Macharia, who coordinates the volunteer-driven GMMP. Women now represent 25% of those seen, heard, read about in news stories, according to data gathered by thousands of volunteers last September.

“This change may only be a slight percentage point, but it is nevertheless statistically significant,” noted Macharia. “And it is the one point in the right direction, halfway to equality.”

European and US media have made the most significant progress in this indicator since 1995, when the first GMMP was launched, and the Pacific Region, since 2015, she said. “Only Africa’s media have stagnated as the rest of the regions have improved by three to 12 points across the quarter century.”

Macharia also noted a “dramatic rise” in stories with women as experts, from 19% in 2015 to 24% in 2020. She attributed it to numerous initiatives to tap women for expert opinion, and to some media organizations who are “visibly making effort to diversify their pool of experts.”

Macharia shared other highlights of the report, including the underrepresentation of women across all identity groups. Teams in 81% of the participating countries took the opportunity provided by GMMP 2020 to collect data on indicators of interest in their national context, which made it possible to analyse news media of subjects and sources on the basis of their other identities such as race, religion, and immigration status.

She cited the example of Latin America, which looked at the representation of Indigenous or tribal groups and found that only 3% of them make it into the news. Of this figure, only one in five is a woman. In the physical world, Indigenous people are estimated to be at least 8% of the region’s population, and women are at least one half of this figure, she noted.

The launch of the much-anticipated report, co-organized by WACC-GMMP and Free Press Unlimited, included reactions to the report from guest panelists from Ecuador, Nigeria, and the United Kingdom.

Karen Ross, professor of Gender and Media at Newcastle University, UK. GMMP regional coordinator for Europe, said what surprised her most in the report was “how little visibility” there was for women health professionals. And, notwithstanding the fact that a pandemic had gripped the world in 2020, there were relatively few Covid-related stories globally and in Europe (25% to 26%). “In the UK, women have been quite visible because health is an area which does actually attract women, and they do manage to get to senior positions,” she said.

The three-point drop for Twitter news stories that feature women as subjects and sources was a surprise to Motunrayo Alaka, executive director of the Wole Soyinka Centre for Investigative Journalism in Nigeria. Alaka said that although it did not come as a surprise to her, she was saddened by the statistics from African news media. “What happens when there’s a crisis situation is that women are even further marginalized.”

Sandra López Astudillo, an expert in gender and media, underscored the need to highlight even the limited progress with regards to how women are represented in the news. “We continue moving forward. And that shows that change is possible in the media, said Astudillo, who has coordinated the GMMP for Latin America and Ecuador since 2005 and is the coordinator of Fundación GAMMA. The increase in women presented as experts “is really good news,” she said.

However, she expressed deep concern about the low representation of vulnerable populations such as Indigenous peoples, people with disabilities, and the LGBTQ population. She also highlighted the plight of migrant women, who she said are not only underrepresented but are marginalized to begin with. “This puts them in a very vulnerable situation, [including] lack of access to the exercise of their full rights.”

Karen Ross added that the report shows the “multiple discriminations, the multiple invisibilities” that exist, especially for women. “The more that you’re far from the norm of the typical news subject, which is the man – the non-disabled, likely heterosexual man – the more invisible you become. And we need to challenge that.”