Advocacy for the Integration of Gender Concerns in Burundi Media
20274
post-template-default,single,single-post,postid-20274,single-format-standard,theme-bridge,bridge-core-3.0.1,woocommerce-no-js,qodef-qi--no-touch,qi-addons-for-elementor-1.5.3,qode-page-transition-enabled,ajax_fade,page_not_loaded,,qode-title-hidden,columns-4,qode-child-theme-ver-1.0.0,qode-theme-ver-28.6,qode-theme-bridge,qode_header_in_grid,qode-wpml-enabled,wpb-js-composer js-comp-ver-6.9.0,vc_responsive,elementor-default,elementor-kit-41156

Posted at 16:23h in Uncategorized by wacc_kn 0 Comments 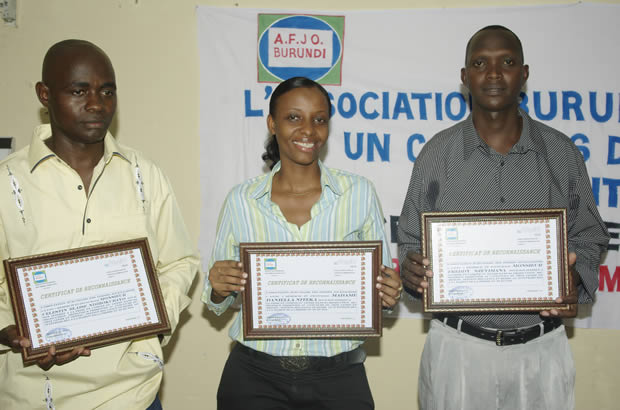 “Burundi is often cited as a good-practice example of a country in which gender considerations have been effectively incorporated into decision-making posts and political office. Such awareness should flow through all development sectors, including the communications industry”. These comments made by Gérard Mfuranzima, Chief of Cabinet, Ministry of Information and Communication were addressed to chief editors and media house directors attending a workshop organised by the Burundi Assocation for Women Journalists (AFJO). The workshop was part of a larger project by the Association to lobby for the integration of gender in Burundi media, an initiative conceptualized to respond to the relative lack of women journalists in positions of responsibility in media houses, the underrepresentation of women journalists in Burundi media and the demonstrated lack of gender sensitivity in media output. The WACC-funded project enabled AFJO create and maintain a directory of women journalists and increase media professionals’ knowledge on ways in which they could incorporate a gender perspective into their work. The advocacy aims were to increase the number of decision-making positions held by women journalists and to improve the portrayal of women in the media. AFJO launched media awards for best print, television and radio productions from a gender perspective.