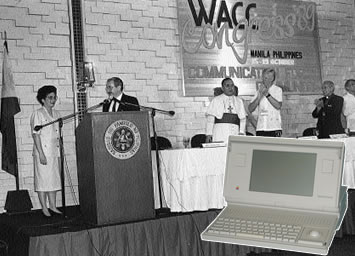 Posted at 20:40h in by Thaís Techemeier 0 Comments

WACC organises its first international Congress on the theme “Communication for Community” held 15-21 October 1989 in Manila, the Philippines. Opened by then President Corazon C. Aquino (left), she spoke of the 1986 revolution in her country having been supported “by Christian communicators, especially the radio broadcasters, who played a key role in mobilizing people, getting them to stay at their posts… and keeping their faith alive in the midst of danger.”