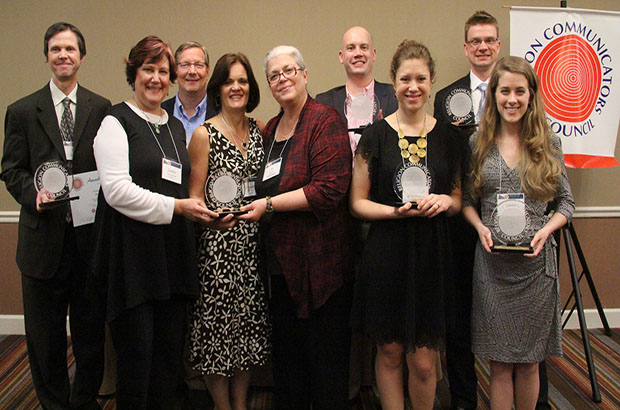 The Religion Communicators Council (RCC) handed out awards recognizing excellence in more than 50 categories of communications and public relations on April 10 at its annual conference near Washington, D.C., reported Jeff Huett, APR, for the RCC.

The annual DeRose-Hinkhouse Memorial Awards, given to active members of RCC, are named in honor of the late Victor DeRose and the late Paul M. Hinkhouse, lithographers in New York City and longtime friends of the RCC. Both men shared a strong interest in, and concern for, excellence in communications.

The top prizes – Best of Class 2015 – went to these communicators:

This year RCC received 214 entries. Each entry was judged on overall quality, including concept, writing, design, creativity, style, use of color, appropriateness of material for intended audience, creative use of resources, and effectiveness in achieving its purpose.

For the second year in a row, faculty members from the Journalism and Mass Communications Department at Marshall University in Huntington, W.V., provided the judges. The RCC received a total of 214 entries.

A full list of recipients is posted on the DeRose-Hinkhouse Memorial Awards page.

The Religion Communicators Council (RCC), founded in 1929, is an international interfaith association of religion communicators who work in print and electronic communication, media, marketing and public relations.