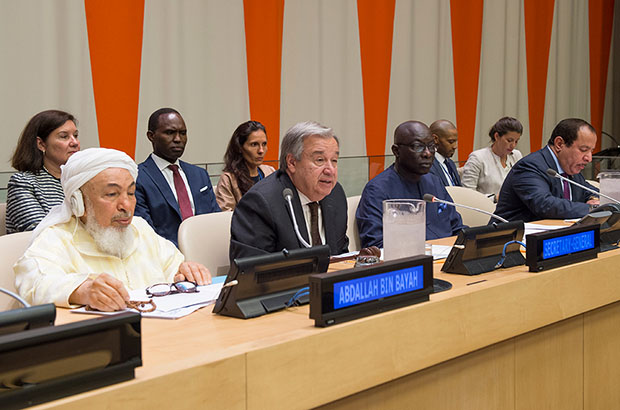 United Nations Secretary-General António Guterres speaks at the launch of the Plan of Action for Religious Leaders and Actors to Prevent Incitement to Violence that Could Lead to Atrocity Crimes. Photo: UN Photo/ Eskinder Debebe.

The United Nations is promoting an action plan specifically designed to enable religious leaders to prevent incitement to violence.

Called the Plan of Action for Religious Leaders and Actors to Prevent Incitement to Violence that Could Lead to Atrocity Crimes, it was launched 14 July 2017 by UN Secretary-General António Guterres.

WACC has noted the inclusion of the role played by traditional and new media, especially promoting ethical standards of journalism, and the need to prevent incitement to gender-based violence.

Incitement to violence that targets communities or individuals based on their identity can contribute to enabling or preparing atrocity crimes, (genocide, war crimes and crimes against humanity). It is both a warning sign and early indicator of the risk that such crimes might take place.

Consequently, monitoring, preventing and countering incitement to violence, particularly in societies divided along identity lines and in situations where tensions are high, can contribute to stabilising at risk situations.

In this respect, the Plan of Action notes that, “Religious leaders and actors can play a particularly influential role, as they have the potential to influence the behaviour of those who follow them and share their beliefs. Given that religion has been misused to justify incitement to violence, it is vital that religious leaders from all faiths show leadership in this matter.”

The Plan of Action contains three main clusters of recommendations aimed at preventing, strengthening and building. Each cluster includes recommendations organised according to thematic focus.

1. Specific actions to prevent and counter incitement to violence

Objectives: (i) Confront ideologies that promote violent extremism and terrorism; (ii) Address topics that religious extremists monopolize, including through accurate and nuanced viewpoints; (iii) Provide counter narratives to those attracted by or who are part of violent extremist and terrorist groups; (iv) Build communities’ resilience, and of youth in particular, to violent extremism; (iv) Contribute to the creation of an alternative youth identity and sense of belonging; (v) Address grievances.

Objective: (i) Address cultural attitudes that underpin the use of sexual violence, and the stigma and shame associated with it; (ii) Curb gender-based discrimination and violence, including their incitement; (iii) Create pathways or space to counter exclusion and discrimination of women and include active engagement in faith leadership.

4. Enhance education and capacity-building to prevent incitement to violence

Objectives: (i) Instil knowledge and belief of respect and non-discrimination, equal citizenship and human rights; (ii) Mainstream appreciation of all cultures/religions or beliefs and the importance of civil co-existence; (iii) Provide sound/wise religious knowledge and understanding; (iv) Strengthen the religious knowledge of “intermediaries” and gate openers within various religious communities; (v) Address cultural attitudes that underpin the use of violence.

5. Foster interfaith and intra-faith dialogue to prevent and counter incitement to violence

6. Strengthen collaboration with traditional and new media to prevent and counter incitement to violence

Objectives: (i) Amplify the positive impact of alternative and counter speech; (ii) Contribute to enhance and promote ethical standards of journalism.

7. Strengthen engagement with regional and international partners to implement this Plan of Action

Objectives: (i) Recognize that human rights principles are embedded in all religious scriptures and texts; (ii) Contribute to stemming the misuse of religion to drive violence and war through protecting human rights, preventing discrimination based on religion or belief, and promoting the freedom to manifest one’s religion or belief; (iii) contribute to promoting peace and reconciliation, including in regions marked by religiously motivated violence.

9. Establish networks of religious leaders to prevent and counter incitement to violence

The Plan of Action can be found here.