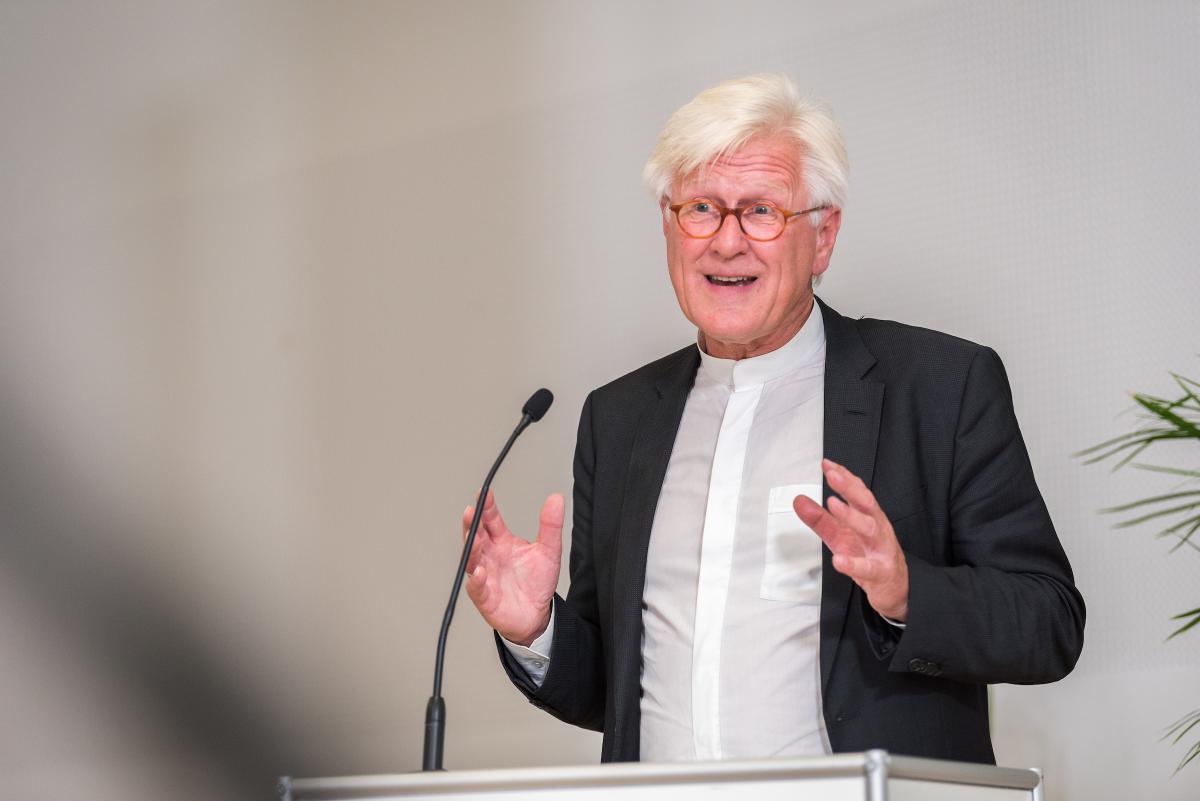 Heinrich Bedford-Strohm, Bishop of the Evangelical Lutheran Church in Bavaria, on September 13 urged Christians around the world to reflect on digitization and its spiritual, ethical, and political implications and to “do it ecumenically,” not only because of its huge impact on people’s lives, but as a gospel imperative.

“There is no doubt that digitization is a crucial dimension of the ‘signs of the times,’” said Bedford-Strohm, during his keynote presentation on digital justice at the international symposium,  “Communication for Social Justice in a Digital Age,” co-organized by the World Council of Churches, WACC, Brot für die Welt, Evangelical Church in Germany (EKD),  Evangelische Mission Weltweit (EMW), and World Student Christian Federation.

While some in the church see digitization “as the fulfillment of a biblical vision,” and its “non-hierarchical model of all-to-all” as something akin to a “Pentecostal spirit,” Bedford-Strohm underscored that “the Pentecostal language miracle and this digital language miracle” are not necessarily equal.

“The algorithms, which govern so much of the digital worlds, are not god-made but human-made. What appears in the digital arena does not come like fate out of nowhere – it is guided and controlled. Those responsible for this change have a phone number and email account,” he said. “Therefore, what happens in and with the digital world needs to be subject to conscious human agency – hopefully with guidance by God’s spirit, but still as result of human agency. This is why it is so important that we come together to seek and find orientation for this agency.”

Digitization must be viewed from the lens of the “biblical option for the poor,” said Bedford-Strohm, as he asked symposium attendees to confront the digital divide and address issues around “monopoly structures” that enable tech giants like Facebook and Google to amass wealth and affect the communication behaviour of billions of people worldwide. He also discussed how AI technologies are allowing big data players “to become more powerful,” with new capabilities for shifting vast amounts of data that can be further commercialized.

Algorithms, which prioritize more extreme content “threatens the very fabric of discourse so crucial for democratic societies,” he said. The proliferation of fake news, hate speech, conspiracy theories and extremist content “is no coincidence. It has a reson,” he said. “If more extreme contents generate the most financial revenue, the algorithms will push them, no matter how detrimental they might be for democratic culture or the promotion of human dignity.”

He cited an example of how in Eritrea, only 1.2% of the population use the Internet compared to 88% in Germany. In terms of gender gap, he cited the case in Rwanda, which has the highest percentage of women in parliament globally, but where “60% more men have access to the internet than women.”

The digital divide has only exacerbated inequality, he said, as he urged Christians to be part of the digital justice movement.  “Christ’s love moves the world to reconciliation and unity. Our divided world needs our contributions as Christians. It needs our public witness.” 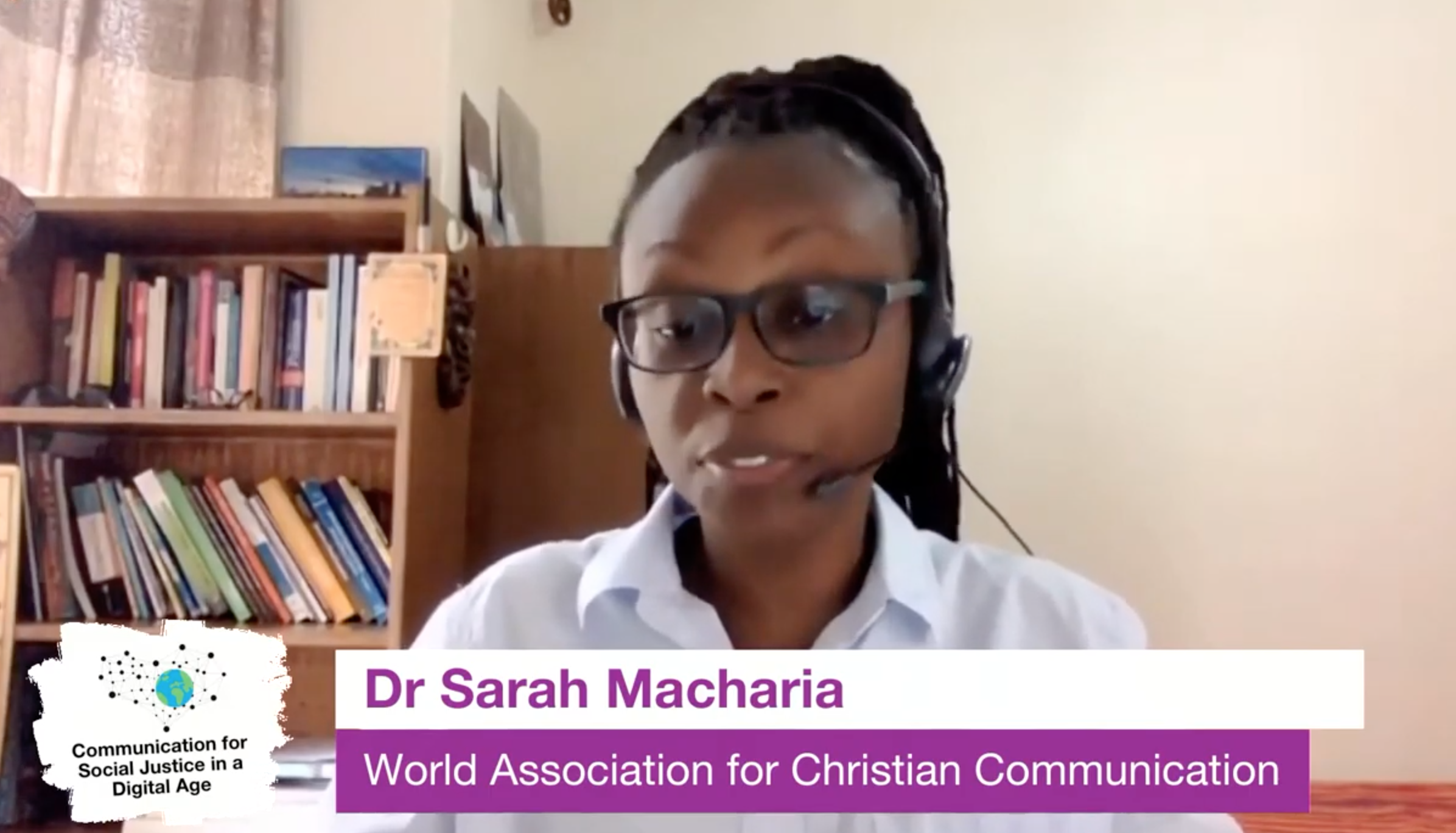 Macharia stressed that “a critical mass of faith communities can help shape digital transformation in a direction that works for all.”  She highlighted three issues that concern gender justice communities: divided access, biased algorithms, and online gender-based violence against women.

“If women’s equal participation in all domains of life depends on their communication rights, including their right to access and use digital technologies, they have a wider gap to bridge because of the gender power inequalities characteristic of all societies, some more intense than others,” she said. The situation is worse for women who are poor, racialized or of ethnic minority origin, elderly, and a resident in a rural area of a global south country.

She cited how digital technologies have been “called out for their inbuilt racial and gender biases,” citing the recent apology by Facebook after its AI labelled a video of black men as “primates.”

Internet search engines, tech giants and software companies are not the only culprits, however, said Macharia. She recalled sitting in a UN plenary session and reading the translations of speeches on the overhead screen and noting how the speeches of brown and black speakers speaking in their own languages were often marked “undecipherable.” This, she said, “is a monumental failing to train AI to treat all voices equally.”

Macharia discussed how digitalization has increased the exposure of women and girls to sexualized harassment, surveillance, trolling and online hate, “all of which can and do spill out from the virtual to the physical, lived world.”

Erin Green, who has a Ph. D in Theology and Artifical Intelligence, also responded to the bishop’s presentation.  She focused on the issue of artificial intelligence and how it must be viewed from a place of curiosity and wisdom rather than fear. “Instead of fearing that we don’t know enough about the digital, to weigh in as experts, we should instead reframe our understanding of expertise and go confidently knowing that we have an incredible wealth to offer about what it means to be human and to live justly within the web of Creation.” 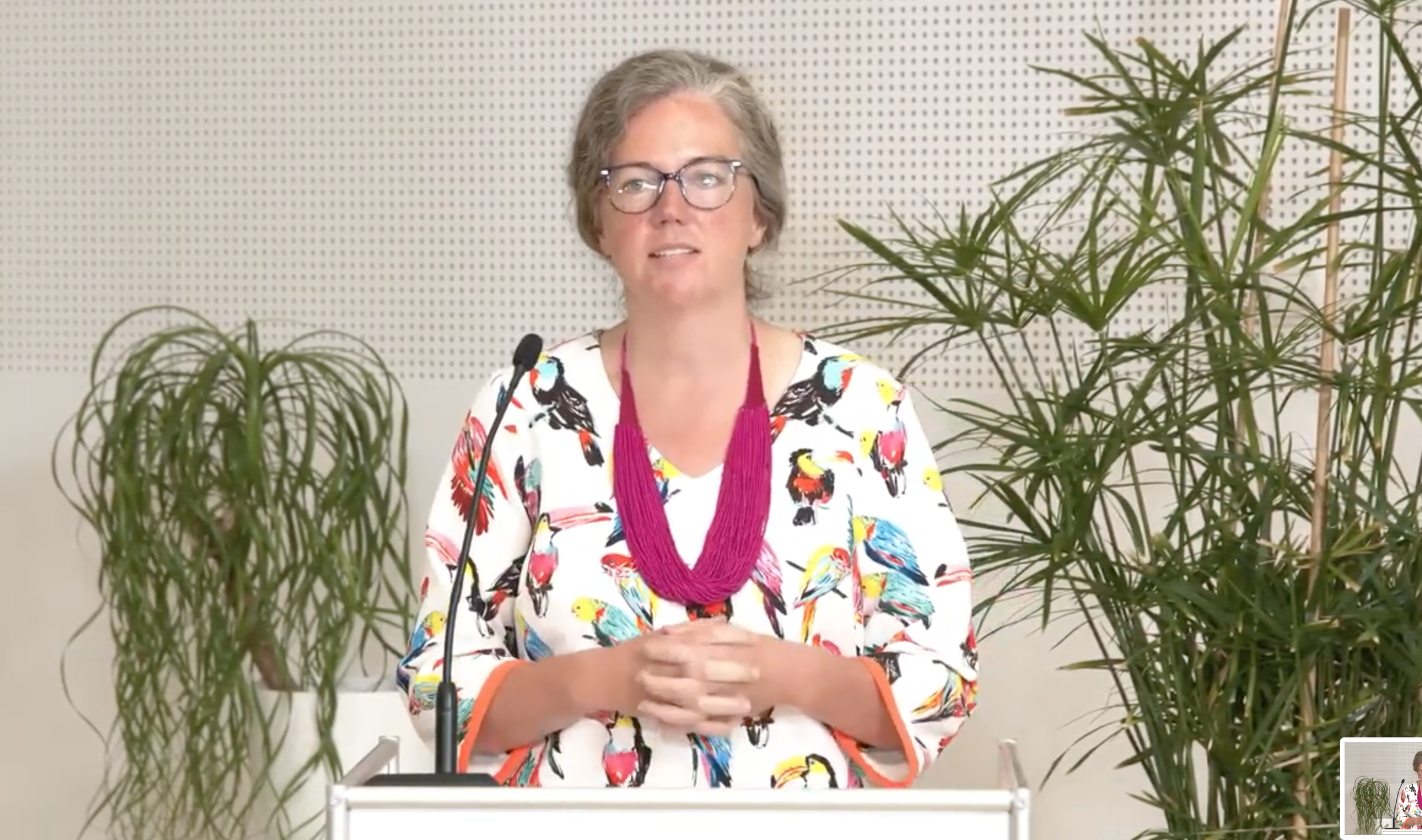 The Christian tradition already has “an incredible depth of insight on racial justice, gender justice, ecological justice, economic justice, and so, so much more that we can easily bring to bear on digital questions,” she said.

Green also called for a deeper examination into military investment and interest in AI, citing “the rise of drones in surveillance, the so-called AI arms race between the United States and China, [and] the European Union rush to regulate AI.”

She stressed that “it is not enough to look at how the technologies are used and received, but to go right to the source, to the source of funding, and look at the agenda and financing behind it.” Green noted how 42 countries are openly developing military robots, and how cumulative global defense spending on AI is expected to be around $487,000,000,000 billion over the next 10 years.

“While churches and church organisations are already positioning themselves as allies in the effort to demilitarize AI and digital technologies, we need to do so much more,” said Green. “Here grassroots efforts are effective…but must be paired with full, energetic theological debate, communal discernment in fora like this one and participation in civil society including movement toward an international treaty on lethal autonomous weapons systems.”

Artificial intelligence has also served as “an accelerant to things that are already present in our society and cultures,” Green added. “Certainly, algorithmic bias is just systemic racism (misogyny, homophobia) by another name. Similarly, we can see how greed, unsustainable consumption, imperialism find their way through AI starting from the very questions we bring to the table. The research structures, methodologies, and finally outcomes are all imbued with these very-human, very damaging patterns.”

She offered, as an example, how Maoris working to preserve their language using speech-to-text technologies “became embattled in a struggle against the platform providers over ownership of their data, their language, and who can profit from its harvesting.”

Above: Dr Heinrich Bedford-Strohm, bishop of the Evangelical Lutheran Church in Bavaria and chairperson of the council of the Evangelical Church in Germany delivers his keynote speech at the symposium exploring challenges and opportunities for a more just digital future. Photo: Albin Hillert/WCC