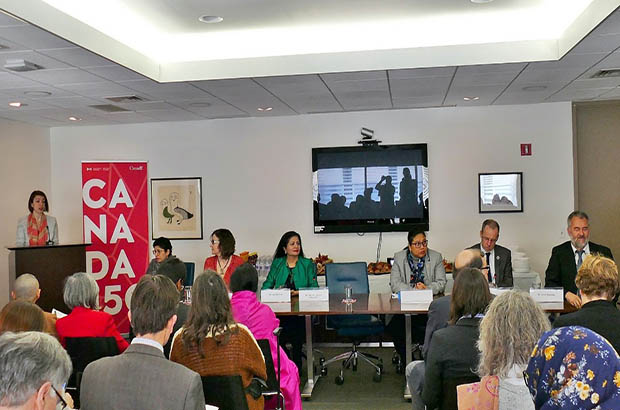 A global Platform on “Gender Equality and Religion for the Gender Responsive Implementation of the 2030 Agenda for Sustainable Development” was inaugurated at the 61st Commission on the Status of Women (CSW61).

Hosted at the Canadian Permanent Mission to the United Nations, the Platform was launched on March 15, 2017.

It builds on recognition established at CSW60 of the role played by faith-based organizations (FBOs) in addressing the needs of women and girls – especially those facing multiple and intersecting forms of discrimination and marginalization.

Rev Dr Karin Achtelstetter, WACC General Secretary, warmly welcomed the creation of the Platform. “This is a significant step forward in collaborative efforts aimed at advancing gender equality, achieving the sustainable development goals, and – in relation to WACC’s own work – ending news media sexism by 2020,” she said.

The Platform aims to bring together religious and traditional leaders, leaders of faith based and civil society organizations, as well as gender and development experts to unpack how achieving gender equality can be pursued from within a religious lens.

It will explore how such an approach can integrate both gender equality and faith as a basis guides the implementation of the other Sustainable Development Goals (SDGs) from eradicating poverty, to health, environment, and peace and security.

In her welcoming remarks, Ms. Patricia Peña, Director General at Global Affairs Canada, affirmed “the value of a platform on gender equality with multi-religious actors for the realization of the SDGs.”

Ms. Lakshmi Puri, Deputy Executive Director and UN Assistant Secretary General, UNWomen, emphasized that this Platform “is a first step towards a common, transformative, cultural and social framing for gender equality bringing together governments, faith community and gender equality activists to jointly advocate, promote progressive standards, build knowledge and movements for women’s empowerment and gender equality as a prerequisite to the full realization of women’s human rights and for the gender responsive implementation of Agenda 2030 for Sustainable development.”

Speaking to the value of the Platform, Ms. Laura Londen, Deputy Executive Director and UN Assistant Secretary General, UNFPA, noted the importance of “engaging not only ordained men but also female religious and community leaders together to jointly advocate for women’s empowerment and gender equality as a prerequisite to the full realization of the SDG agenda as a whole.”

Ms. Ina Krisnamurthi, Deputy Permanent Representative of the Republic of Indonesia to the United Nations, noted that “religious leaders play an important role in the daily life of the majority of people, and it is in cooperation with religious leaders that the Indonesian government worked on a number of successful development initiatives, such as the promotion of fathers in childcare.”

Ambassador Martin Shearman, Head of Development and Human Rights at the Permanent Mission of the United Kingdom to the United Nations underlined the UK’s commitment to co-lead the effort of realizing this Platform, while noting the historic benefits of cooperation with religious actors and institutions in his own country.

“The distinct features of religious actors are trust, legitimacy and outreach throughout the society, particularly their ability to reach people who cannot be reached through conventional means thus crucially contributing to the overarching prerogative of ‘Leave No One Behind’,” he said.

Mr. Ulrich Nitschke, head of the secretariat of the International Partnership on Religion and Sustainable Development (PaRD) spoke to the importance of tackling topics which are ambivalent and sensitive in the framework of development cooperation and religion. Given that comprehensive of gender equality, “it is not only desirable but necessary to have a mechanism which brings governmental, inter- governmental as well as faith-based civil society organizations together”.

Today’s initiative aligns with the Sustainable Development Goals, particularly Goal 5 and 17, which call on ending all forms of discrimination against women and girls everywhere by 2030, covering all areas of discrimination in law, policies, and practices.

Representatives from different faith traditions also affirmed the value of a Platform which would contribute to the building of knowledge on the intersections between gender equality and diverse faith traditions, as well as lived experiences of women worldwide.

Photo above: International Partnership for Religion and Sustainable Development (PaRD)