Posted at 12:26h in Uncategorized by wacc_kn 0 Comments 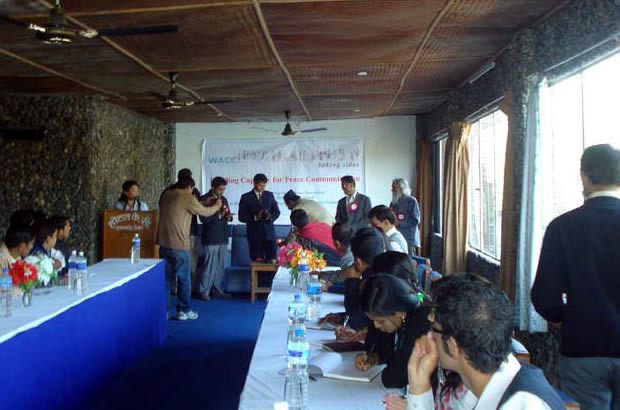 With the regional trainings, interactions, widely circulated peace journalism e-bulletins and peace journalism scholarships, Subaltern Forum helped Nepalese journalists — especially those who are reporting form outside the Kathmandu valley — understand, internalize and assimilate the principle of “alternative journalism”. Following the program, there are hundreds of skilled journalists who can now boldly say, practice and advocate that the “media should communicate peace, and not just news”. In the past one year, Subaltern Forum trained a total of about 100 journalists directly through two of its training programs conducted in Pokhara and Ramechhap and involved almost the same number of journalists in writing and publishing/broadcasting news, articles and radio features as per the principle of peace journalism. About a dozen of radio and print journalists were given scholarships to promote the practice of exercising peace journalism in their news rooms and news fields. Subaltern Forum also brought into Nepali language some handy resources and guides. The outcome is that a new wave of peace journalism has already started in Nepal with increased understanding about the concept and its benefits. Those who were trained and were involved in any of activities of the organization have now realized that, traditionally, what they had been doing in Nepal was communicating hard news, which was sensational, provocative and propagandist. There is enhanced awareness and realization that traditional journalism is geared more toward ensuing conflicts rather than resolving them and that there is an alternative solution to that problem.