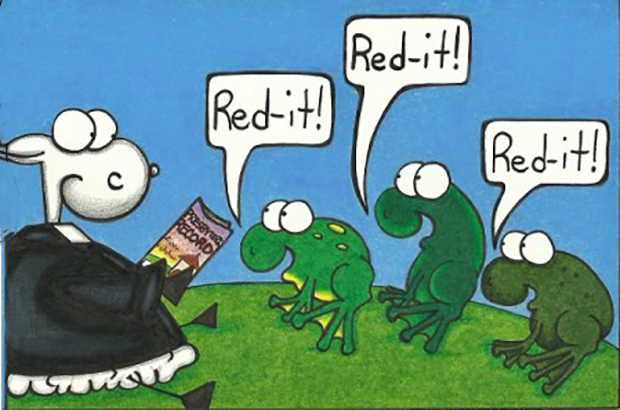 Part of a cartoon by Susan Mattinson that appeared in the Presbyterian Record.

The Presbyterian Record, one of Canada’s longest continuously published magazines, announced it will cease publication in December 2016.

First published in 1876, the Record had a long-standing independent editorial policy in reporting on the denomination whose members it served, The Presbyterian Church in Canada.

Since 2000, the magazine has been independently owned and published by Presbyterian Record Inc.

“Our donors have been fantastic,” said Harris. “Over the past 12 years, they have given us almost $1.5 million. Without that support, the magazine would have folded years ago.”

Harris said publishing an online-only version of the magazine was not an option. “Salaries, not printing and postage, are the biggest costs at a small magazine like the Record,” he said. “You need excellent staff whether a publication is online or print. And the Record could not expect to generate significant online revenue.”

In a statement board chair Botond Fejes wrote: “Arriving at this conclusion has been a difficult process for the board. Its members have struggled with this responsibility for a considerable time. The continued publication of the Record, in its present configuration, was simply not sustainable … therefore, we are sadly constrained to allow this ebb in the fortunes of the Presbyterian Record to run its course.”

“Besides the fall in denominational numbers, the financial crisis of 2007-2008 was definitely a major factor,” said Harris. “Many—perhaps most—Presbyterians are on a fixed income. They saw their net worth fall, their pension income decline, and congregations needed their money just to keep up the buildings and ministers’ salaries.

“The magazine became an expendable luxury under the circumstances.”

The 2000s have been hard on both church membership and print media. Dozens of denominational and other faith-based magazines have closed—the Western Catholic Reporter, with a weekly circulation of 32,000, folded its print edition at the end of September.

The Presbyterian Church in Canada itself has lost about a third of its members so far this century. According to the denomination’s statistics, at the beginning of 2000 there were 134,683 communicant members, and 28,120 children in Sunday schools.