Posted at 12:27h in Features by Philip Lee 0 Comments 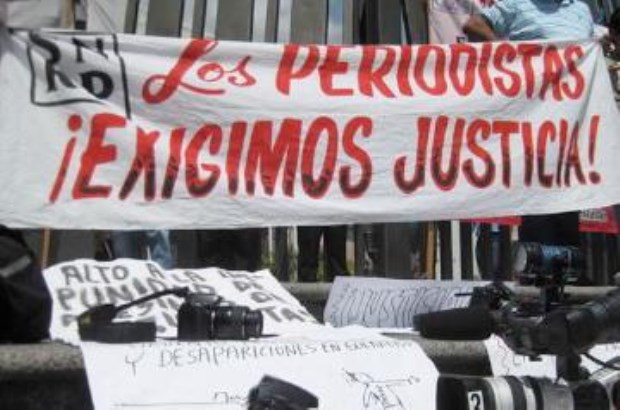 The wave of drug-related censorship that has submerged thousands of journalists in Mexico has reached the capital city, according to the Committee to Protect Journalists (CPJ).

Mexico has one of the highest ratings on the CPJ’s 2013 Impunity Index, which measures the frequency with which journalist murders go unpunished. Crimes against journalists are rarely prosecuted in Mexico, and when they are, evidence can be highly suspect.

In 2006 former President Felipe Calderón declared war on Mexico’s criminal syndicates, resulting in a predictable backlash. Government “rules” required reporters in the provinces to ignore cartel activity and to do little more than regurgitate official press releases. Those who strayed from this editorial line faced threats, kidnappings, beatings and murder.

In 2011 Mexican media companies cooked up an agreement to regulate the way journalists report on the drug war, proposing methods to restrict both images and speech in news broadcasts. Behind the accord was the Mexico Initiative, a massive public relations campaign that was subsequently accused of using the media to try and stamp out public dissatisfaction and rebellion.

“Journalists, particularly those who report on crime or criticize officials, face harassment and attacks. At least 85 journalists were killed between 2000 and August 2013, and 20 more were disappeared between 2005 and April 2013, according to the CNDH [Mexico’s National Human Rights Commission]. Authorities routinely fail to adequately investigate crimes against journalists, often pre-emptively ruling out their profession as a motive.”

“Journalists are often driven to self-censorship by attacks carried out both by government officials and by criminal groups, while under-regulation of state advertising can also limit media freedom by giving the government disproportionate financial influence over media outlets.”

The situation in Mexico is emblematic of the kind of failure that HRW’s World Report 2014 describes as adopting the form but not the substance of democracy:

“…permitting elections, often controlled, but nothing more. This feigned democracy rejects basic principles, such as that governments must be accountable under the rule of the law, limited by the human rights that protect minorities, and committed to allowing free and continuous public debate.”

Journalists outside Mexico have a duty – as in regard to Myanmar and Syria for example – to highlight what is happening inside the country. As an article published on the web site of Canadian Journalists for Free Expression pointed out:

“Greater attention from other government leaders could put pressure on the Mexican government to undertake much needed reforms. The government must get its own house in order – routing out corrupt elements and building a new system that supports the rule of law, does not tolerate intimidation and attacks on journalists and makes it a priority to ensure that all journalists are able to work in safety. The converse – a growing number of Mexican journalists turning to exile – would be a very bleak future for press freedom in Mexico.”

Ifex – the global; network defending and promoting free expression – has a great graphic about impunity in Mexico. It begins: “Close to 99% of crimes against journalists and the media are committed with impunity in Mexico. Scroll down to find out more about who is being targeted and who is responsible.”

One of the Committee to Protect Journalists’ biggest successes in recent years was securing legislation to implement a constitutional amendment giving federal authorities broader jurisdiction to prosecute crimes against freedom of expression.

In Mexico, so far the scales are weighted against freedom of expression and opinion, which are key elements of the right to communicate. Considerable political will be needed to overcome what now appears to be endemic corruption and impunity.