Community Radio Highlights Struggles of the Urban Poor in the Philippines
21116
post-template-default,single,single-post,postid-21116,single-format-standard,theme-bridge,bridge-core-3.0.1,woocommerce-no-js,qodef-qi--no-touch,qi-addons-for-elementor-1.5.6,qode-page-transition-enabled,ajax_fade,page_not_loaded,,qode-title-hidden,columns-4,qode-child-theme-ver-1.0.0,qode-theme-ver-29.2,qode-theme-bridge,qode_header_in_grid,qode-wpml-enabled,wpb-js-composer js-comp-ver-6.10.0,vc_responsive,elementor-default,elementor-kit-41156 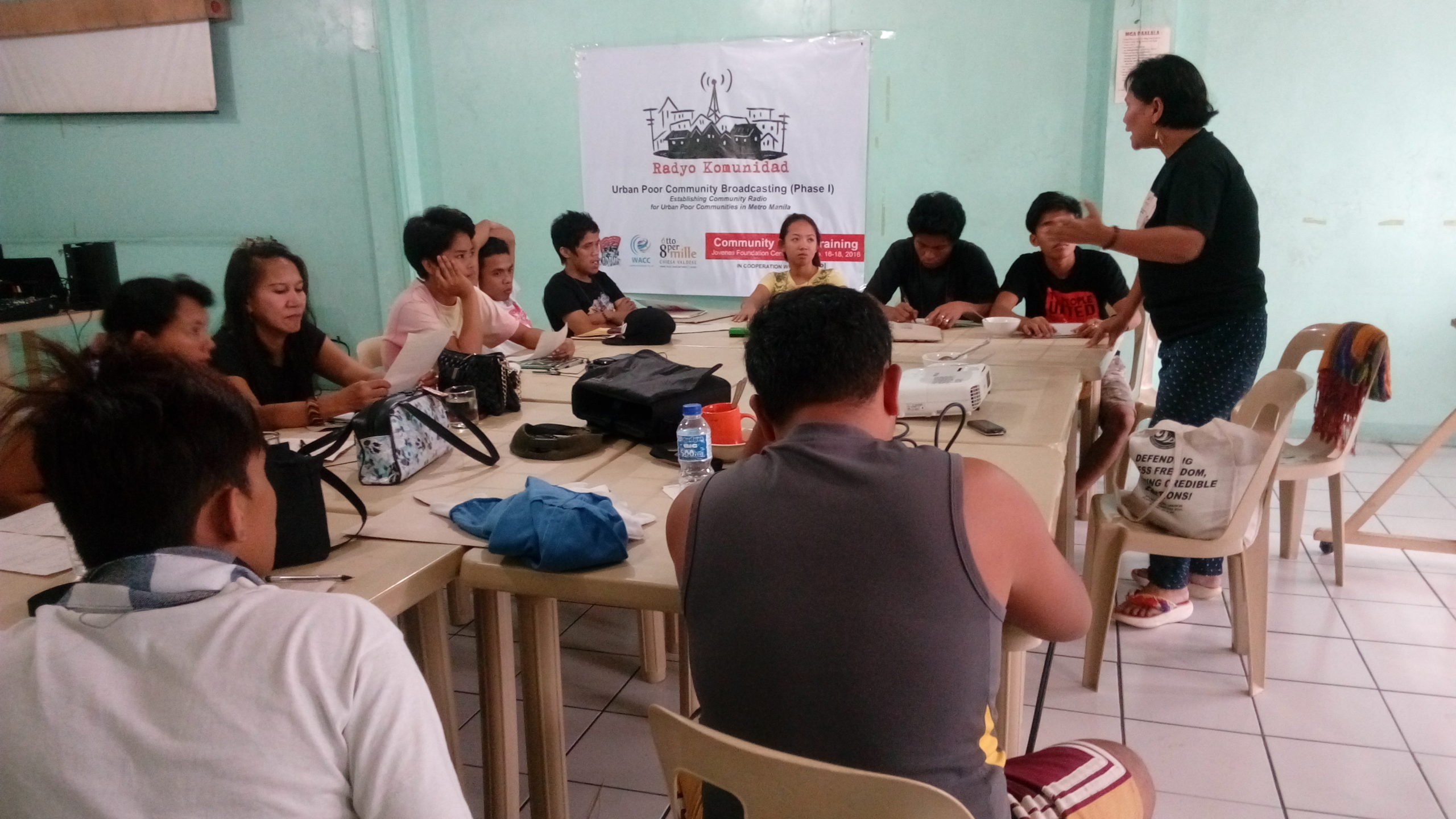 Posted at 12:24h in Communication Rights, One Year Projects by wacc_kn 0 Comments 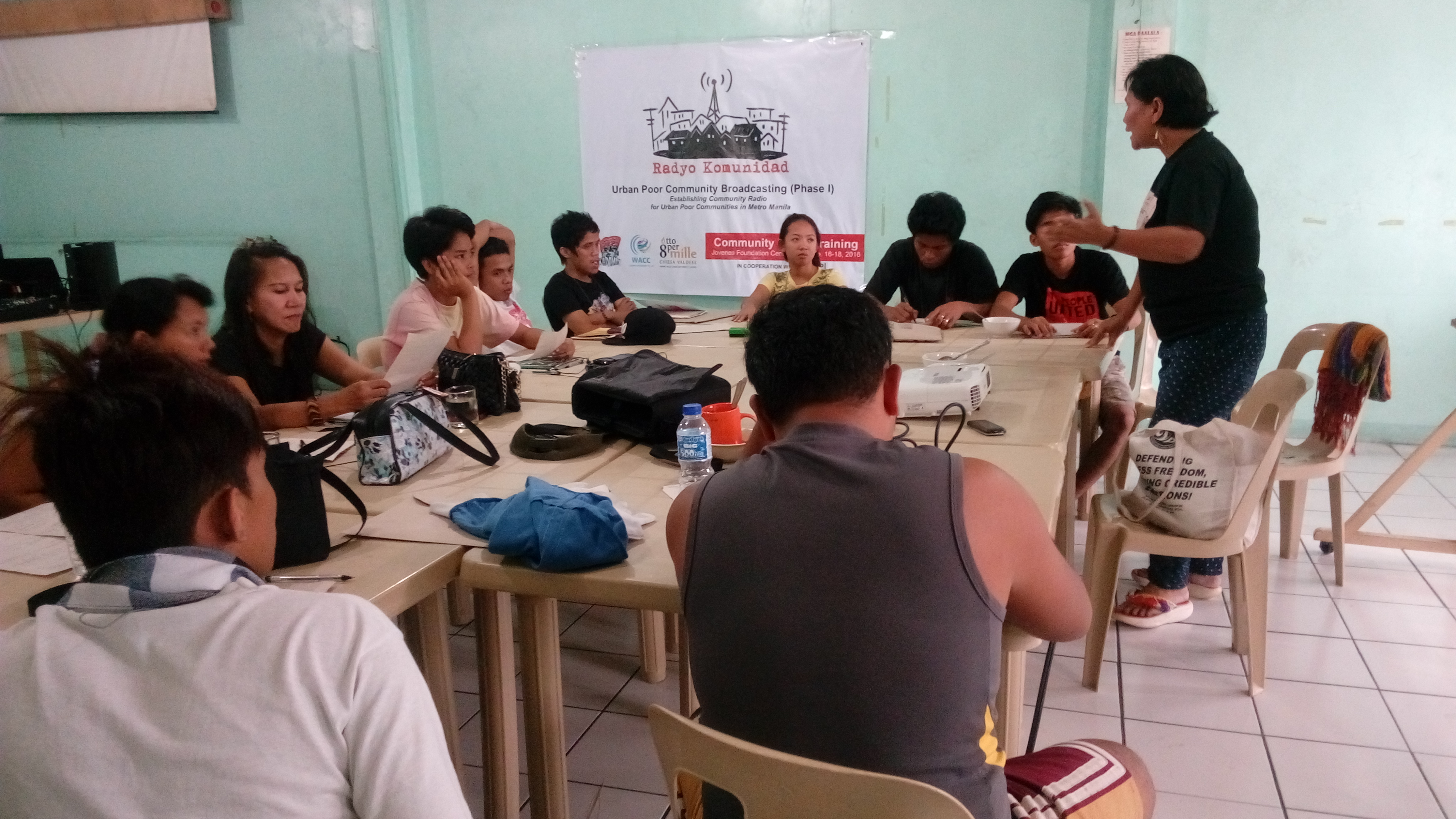 It is imperative that each community is well-engaged and its members empowered, especially at a time when controversies continue to shape up each day and surround the economic, and the socio-political arena.  Building on the strengths of the community, or in the Filipino sense, the barangay, is a crucial part of nation-building. For KADAMAY, a leading nationwide alliance of organizations of the urban poor, community engagement and development can be realized through constant political education and capacity-building of the members of the communities.

In this context, KADAMAY, with WACC’s support, set out to establish a community-based radio system—one that would prioritize critical and people-oriented discourse- in two areas where it has been working for a number of years.

Initially, two community-based radio broadcasting systems were set up (one in Camarin, Caloocan and another in San Roque, Quezon City). Using only minimal equipment, these prototype systems, called Radyo Komunidad, were able to attract volunteer broadcasters (around 20 participants) from among the members of the communities. Through the initial training offered by partner organization KODAO Media, community members were made aware about the vitality of community radio. Several workshops were conducted on topics such as basic radio training, anchor training, news gathering, and news writing. Since its inception, a total of 17 community leaders have been continually engaged in broadcasting in the stations, which has raised the profile of the initiative. 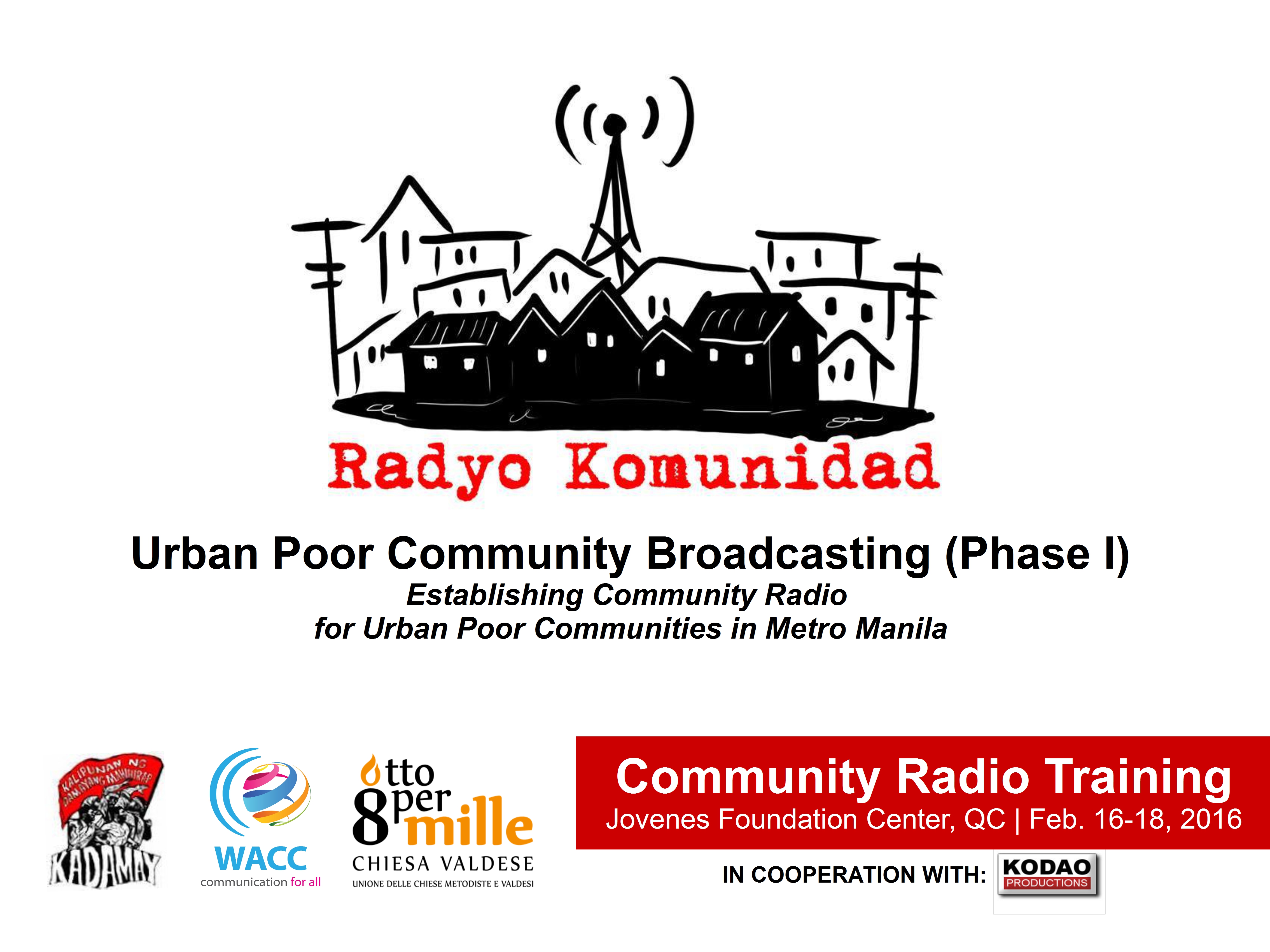 Through this project, KADAMAY has not only been able to provide an avenue for addressing the concerns of local residents, such housing rights, unemployment, low wages, and other repressive and anti-poor policies of the government, but it was also been able to strengthen alliances and solidarity, which has allowed KADAMAY to launch successful advocacy and awareness raising campaigns that best served the interests of the poor.

The project also contributed to the dissemination of information on disaster preparedness and climate change resilience. This was achieved through the daily and/or weekly use of the radio as a tool to discuss issues like proper garbage collection, information dissemination on various government projects, organizational announcements, and updates on pressing events.

The spirit of grassroots participation is Alive in Radyo Komunidad. From news sourcing and identification of relevant community issues, to the capturing of feedbacks and insights, the radio systems in Camarin and San Roque really are examples of collective media ownership of the poor, a true reflection of the communities’ potential.

By using a platform that they can call their own, community actions such as noise barrages – where people would gather and hold a short program and make noises with household items as a way to demand attention to their issues- were also staged.

The activities of Radyo Komunidad have successfully led to increased community engagement. However, despite an increased level of community awareness of climate change, flood, and earthquake vulnerability, the authorities have not responded to the clamour of the people. Flooding is still frequent in some of the areas served by KADAMAY. KADAMAY believes that relevant authorities must constantly be pressured for them to act upon these issues.

From training and discussions to familiarization of the very platform itself, to report making and the actual broadcasts, it can be said that on the whole the project has been successful. Despite the many obstacles such as little budgetary allocation, little manpower, organizational management and coordination issues, the lack of systematization of the broadcasts causing its irregularity, the future for these community-based radio systems is just so bright.