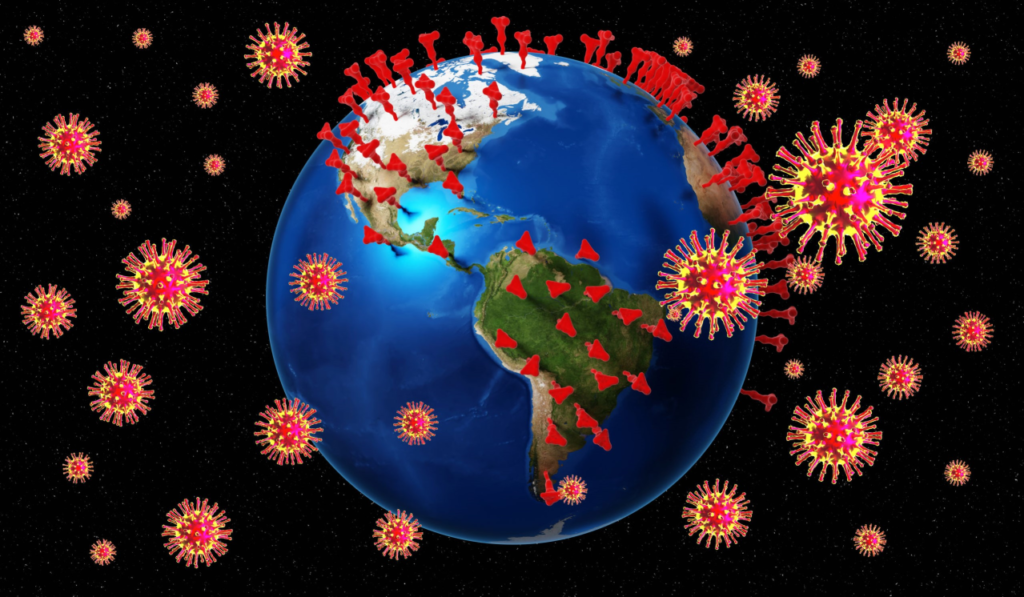 Does the COVID-19 pandemic mark the birth of a new form of biopolitics? The Latin American case shows important departures from Europe and the United States, both in the adoption of surveillance technologies and in the types of biopolitical control enacted through them.

As the first pandemic in the datafied society, the COVID-19 pandemic offers an opportunity to reassess debates about digital communication and governability. At the core of these debates is the interest in understanding particular aspects of digital biopolitics – the ambitious efforts by governments and corporations to maximize knowledge and control of populations for political and economic power, as well as the vulnerability of democratic rights such as privacy and the right to know. In a recent article, Stefan Ecks (2020) concludes “we have never seen biopolitics on such a scale. 2020 is the birth year of radical biopolitics.”

Given our longstanding interest in the datafied society in Latin America, we are interested in assessing the applicability in the region of arguments about contemporary biopolitics in Europe and the United States. Even if it is early to draw categorical conclusions given that we are in the middle of the pandemic and its evolution and aftermath are unpredictable, there are indications that the current situation in the region does not match recent conclusions about the escalation of biopolitics.

At the time of this writing [June 3, 2020], Latin America has become the new epicenter of the pandemic with growing number of reported cases of infections and deaths. Various governments in Latin America (Peru, Argentina, Bolivia, Chile, Ecuador, Mexico, Colombia and Brazil) and the Inter-American Development Bank have deployed digital technologies to control the transmission of the virus and to support testing and tracing. They have collaborated with private companies and universities in setting up mobile applications for geolocalizing and contact-tracing possibly infected people. Expectedly, these actions have raised concerns about the negative impact of massive surveillance.

However, while we recognize the legitimacy of these concerns, the problem in Latin America takes different dimensions than in Europe, North America, and East Asia. For the moment, the governments in the region have significant problems to launch and maintain massive digital surveillance apparatuses. What stands in the way of pandemic-driven biopolitics is not a firm official commitment to protecting personal data or to balancing public health objectives and democratic rights. The obstacles are rather technological and institutional, namely, poor reach and limited effectiveness of digital and mobile technologies as well as deep-seated problems of state performance in terms of governmentality and the provision of health services in the region.

Various factors shape biopolitics: government objectives, adequate bureaucratic systems to manage large-scale operations, accountability and transparency of mechanisms and policies, the reliability of digital platforms, and the current conditions of epidemiological surveillance in each country. None of these aspects in Latin America are comparable to the situation in most countries in the global North.

Most national health systems suffer from chronic and severe deficits in the provision of services and the monitoring of populations. Health systems traditionally underserved large swaths of the population and have been chronically underfunded and unequal. Also, they have lacked effective government administrative systems to set up, conduct, and maintain massive monitoring based on health and other personal data. Underreported health data is common; in some countries such as Nicaragua, Peru and Venezuela, health authorities have not bothered even to report basic epidemiological data. Underreporting of cases is widely suspected.

It is hard to imagine that suddenly health systems in combination with other government agencies would be set up well-lubricated apparatuses. Take, for example, the decision by Brazil’s President Jair Bolsonaro to terminate the agreement between telecommunications companies and the Ministry of Science, Technology, Innovation and Communication to provide information on mobile phones related to geographic location and mobilization. The decision was driven by Bolsonaro’s reckless pandemic policy than by concerns about data protection. His government has had an appalling performance since the beginning of the pandemic and it has flatly dismissed concerns raised by health experts (including his former Ministry of Health Nelson Teich) and the World Health Organization.

Official disinterest in mobilizing digital technologies to control the pandemic pales in comparison to the way that police, military and intelligence services in the region have historically approached communication and information technologies for securitization. Since the early decades of the 20th century until recent military dictatorships and contemporary democracies, governments have developed surveillance technologies to control populations, often with funding and technical support from foreign countries.

Recently, governments in various countries, including Colombia, Mexico, and Guatemala, have beefed up surveillance technologies to spy on critics including human rights activists, politicians and journalists. Nowhere in the region did national governments show comparable interest in incorporating digital technologies to maximize biopolitics. The differences are quite telling and show different priorities and approaches to surveillance and population management.

Another difference is that digital technologies do not provide significant results without a high rate of adoption of contact tracing and geo-localization applications via cell phones. Their usefulness to contribute to control the pandemic would be quite limited due to technological limitations, namely, the restricted availability of high-end cell phone equipment with Bluetooth and GPS and the unequal infrastructure of cell coverage in the region. Also, a well-functioning digital system would require relatively updated mobile phones, which is not the case among vast numbers of people, as civil society organization such as Derechos Digitales and Fundación Sadosky have observed.

According to 2010 data, between 65% and 85% of households own mobile phones in Latin American countries, except for Cuba and Venezuela where numbers are lower. Although a more recent survey shows that 89% of Latin Americans have a cell phone and 47% a smartphone are used with prepaid plans. In addition, mobile phone services in many countries, such as Mexico, Argentina, Brazil, Colombia and Venezuela, are the targets of frequent complaints for poor quality, according to consumer rights protection associations.

Also, current health applications use considerable battery power and memory space, which would reduce people’s willingness to use them. That is why Apple and Google, the two largest providers of operating systems for cell phones, joined forces to address this issue. Nonetheless, it is not clear yet whether digital corporations will make certain applications available in older mobile phones which are common in the region.

Finally, application malfunctions during the somewhat chaotic launch of COVID-19 in several countries have discouraged people from using them. Due to poor design, applications had many vulnerabilities. This was the case in Argentina in the province of San Luis, where national identity documents (including the processing code that is an authentication factor and the photo) were leaked, and in Buenos Aires where it is possible to access to the date of birth and address of any citizen.

In summary, the pandemic has prompted state-directed plans for monitoring COVID-19 prevalence in partnerships with digital corporations and universities, but their results are uncertain at the moment. It is not clear that they would achieve expected results. The obstacle is not a strong culture of privacy and data protection, but rather, chronic problems in government agencies to ensure that health systems have ample and quality coverage coupled with weak and uneven commitment to addressing the pandemic.

In countries with serious infrastructure problems and insufficient funding for health services, it would have been surprising if governments had actively promoted data tracking to inform healthcare research and policy and fix intractable problems. Indeed, the spotty record of health systems in the region in responding to dengue, zika, Chagas and other infectious disease outbreaks in recent years suggests that government negligence and lethargy are not conducive to deploying massive digital-based monitoring and interventions.

Knowing the scope of the disease implies collecting massive amounts of data on populations, improving reporting systems, and deploying state-of-the-art technologies – all tasks that demand the kind of government commitment that has been notoriously lacking in health systems in the region. Biopolitics assumes the willingness of states to know and roll out systems to track and control populations. On health matters, Latin American states have largely lacked the political will as well as human, economic and technical resources to know and act.

Reprinted from Datactive under the Creative Commons license Attribution-ShareAlike 4.0 International.

Silvio Waisbord is a professor in the School of Media and Public Affairs at the George Washington University, USA.

Image above: courtesy of Datactive