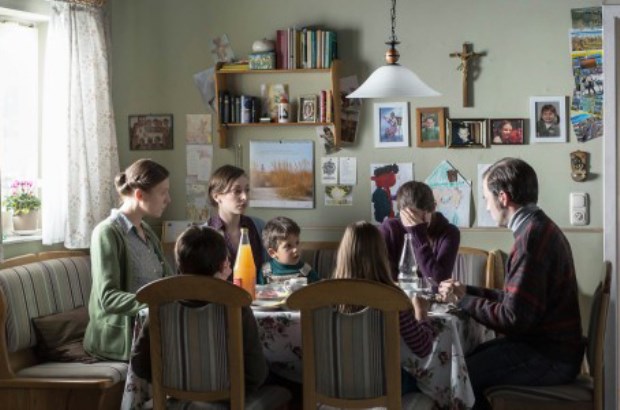 Still from the film Stations of the Cross directed by Dietrich Brüggemann.

The Ecumenical Jury at the 64th Berlinale (6-16 February 2014) awarded its main prize in the Competition to the film Stations of the Cross directed by Dietrich Brüggemann, Germany/France 2014. The citation read as follows:

“14 year-old Maria grows up in a fundamental Catholic community and tries to understand what it means to give one’s life to God. The 14 chapters modelled on the Stations of the Cross are coherently filmed in a tableau-style with hardly any camera-movement or music. They portray the destructive aspects of any fundamentalism but also lead us to reflect about the meaning of compassionate faith.”

The Ecumenical Jury, appointed by INTERFILM and SIGNIS with the support of WACC, gives awards in the Competition, Forum and Panorama sections. The Forum and the Panorama Prize carry prize money of €2500 each, donated by the German Bishops’ Conference, and the Evangelical Church in Germany (EKD).

The Jury awarded a Commendation in the Competition to the film ’71 directed by Yann Demange, Great Britain 2014. “An ordinary British soldier lost in the apocalyptic inferno of Belfast is desperately trying to find his way back to his unit. Will he find any Good Samaritans among Protestant Loyalists or Catholic Nationalists to help him in this desperate situation? Though it is set in a specific historical context, this story has a universal relevance as it denounces the senselessness of violence.”

The Jury awarded its Prize in the Panorama to the film Calvary directed by John Michael McDonagh, Great Britain/Ireland 2014. “An Irish-Catholic priest learns during a confession that he has only one more week to live before he will be killed. Will his moral integrity lead him to bear the sins of his church? Various serious topics are often dealt with in a dark humorous way. Brendan Gleeson’s memorable performance will become a classic in the canon of movie-priests.”

The Jury awarded a Commendation in the Panorama to the film Triptyque directed by Robert Lepage and Pedro Pires, Canada 2013. “Do changes in our brains alter our souls? The film explores this question with three different narratives about what and how we hear and understand. This highly cinematographic meditation offers thought-provoking observations about music, religion, medical science and our auditory senses.”

The Jury awarded its Prize in the Forum to the film Sto Spito / At Home directed by Athanasios Karanikolas, Greece/Germany 2014. “Nadja, a Georgian migrant woman, works without any benefits as a housekeeper for an upper class Greek family. For years she has lived as a part of the family – but suddenly she is diagnosed with a serious illness just as the father of the family runs into some financial difficulties. The film highlights the inherent dignity of a woman at the margins of society.”