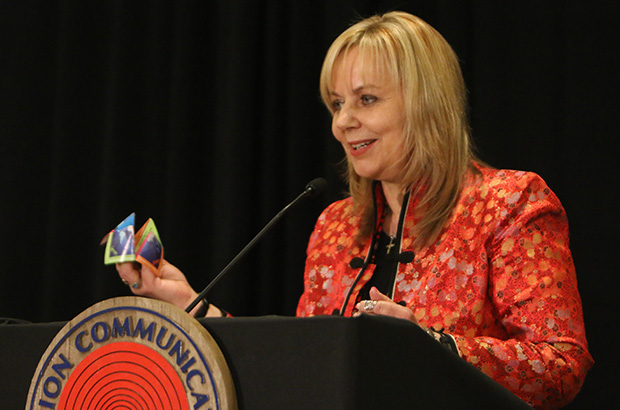 The right to communicate, as a fundamental human right, relates to religious freedom because there is “a sacredness to the creation of meaning in common in which communication reflects the spiritual values at the heart of human identity,” said the Rev. Karin Achtelstetter, WACC General Secretary.

Speaking at the Religion Communicators Council’s 2015 convention on April 11, Achtelstetter’s speech reflected the convention’s theme: “Faith-Based Communications: Connecting Locally, Reaching Globally.” She cited the values of the Newseum Institute’s Religious Freedom Center as central also to WACC’s identity as an international non-governmental organization that promotes “Communication for All.”

Among the institute’s principles are: “Conflict and debate are vital to democracy.” However, it also notes that if controversies about religion and public life are to advance the best interests of all, “then how we debate, and not only what we debate, is critical.”

For its part, WACC believes that “communication plays a vital role in building peace, security and a sense of identity – as well as in promoting justice, mutual accountability and transparency,” said Achtelstetter.

Freedom of communication is essential to the health of communities, since it “is the invisible bond that holds communities together,” she noted.

“Relationships within a community are created and strengthened by face-to-face conversation, community media run by and for its members, and social media that enable genuine participation in political, social and cultural questions relating to the common good,” she said.

Achtelstetter said the title of her theme — “Faithful Responses to Local/Global Needs” – indicated that “local needs and global needs are two sides of the same coin: that a faithful response to the question ‘Who is my neighbor?’ makes no distinction on grounds of gender, race, or social status.”

In the global realm, Achtelstetter noted, the 2015 edition of the WACC-supported Global Media Monitoring Project (GMMP) had just taken place on March 25.

Since 1995, the GMMP every five years has gathered selected indicators of gender in the news media, studying women’s presence in relation to men, gender bias and stereotyping in news media content. In 2015, it was carried out by hundreds of volunteers in more than 130 countries around the world.

The GMMP “is a collective story and shared commitment of hundreds of people across the world, coming together on an ordinary day, every five years, in order to monitor, document, and analyze the role and image of women across the spectrum of news media,” she said.

The 20-year-old project “has revealed a picture of a world in which women are virtually invisible. Women are dramatically under-represented in the news. In 2010 the study showed that only 24% of news subjects – the people who are interviewed, or whom the news is about – are female. Women’s points of view are rarely heard in the topics that dominate the news agenda; even in stories that affect women profoundly, such as gender-based violence, it is the male voice (64% of news subjects) that prevails,” Achtelstetter pointed out.

The 2015 results are now being tallied.

Turning to her theme, Achtelstetter asked whether faith-based organizations are always responding faithfully. “It is a question numerous development agencies are struggling with. How much are our responses a reflection of the policies of our donors and back donors rather than the responses to the needs of those communities that are calling upon us?” she asked.

NGOs such as WACC “need to be more focused in our efforts to guarantee the communication and information rights of affected communities,” she said.

“Religious communicators play a vital role in making connections between local and global events, and sustainable development can only be achieved with strong interfaith cooperation based on shared values and … dialogue in action, in which people of diverse faiths come together and engage themselves to resolve issues of common concern and to pave the way for genuine transformation,” she concluded.