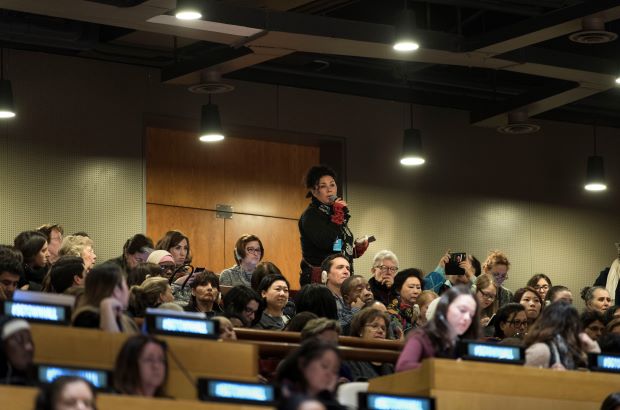 A group of women’s rights organizations and non-governmental organizations is urging the Commission on the Status of Women (CSW) to postpone the adoption of the final draft version of its Political Declaration. The group is concerned that it “omits a clear commitment to ending violence against women and sexual minorities in all spheres including the media offline and online,” and to “eliminating gender stereotyping in the media.”

The 64th session of the CSW was scheduled to meet March 9 to March 20 in New York, but following the outbreak of coronavirus disease (COVID-19) the meeting was scaled down. A shortened “procedural meeting,” with New York-based delegations only, has been planned for March 9 to adopt the draft Political Declaration.

“We, the Global Alliance on Media and Gender (GAMAG), the Global Media Monitoring Project (GMMP) Network, and the World Association for Christian Communication (WACC) are concerned that the small but certain steps made towards gender equality in and through the media will be reversed as the policy support for intervention is weakened,” said a statement issued by the group.*

“It is widely recognized that the fair and balanced portrayal of women in the media plays a key role in helping to address structural barriers and discriminatory norms in society and we feel strongly that the Political Declaration should make this clear,” said the statement.

Any gender equality UN declaration of the 21st century must address mass media and social media, say members of the group. The latest UNDP report says that “despite decades of progress closing the equality gap between men and women, close to 90% of men and women hold some sort of bias against women, providing new clues to the invisible barriers women face in achieving equality…”  The same report states that “Changing unequal power relationships among individuals within a community or challenging deeply rooted gender roles can be achieved through education [and] by raising awareness.” Here, media has a critical role to play by helping eliminate gender stereotypes in their coverage of news and by challenging gender inequality in society.

The groups said the CSW should postpone the adoption of the Political Declaration until later this year, “once substantive, broadly participatory and democratic deliberation has been had on these and other issues that are pertinent to the full implementation of the Beijing Platform for Action, SDG5 and other gender-related goals in the 2030 Agenda.”

2020 is particularly significant for gender equality – it’s the 25th anniversary of the Beijing Platform for Action, and the fifth year of the 2030 Agenda for Sustainable Development adopted by the UN.

The CSW is the UN’s “principal global policymaking body dedicated exclusively to gender equality and the advancement of women,” and representatives of member states traditionally gather each year at the UN headquarters to evaluate progress on gender equality, identify challenges, and set global standards for promoting gender equality worldwide, according to its website.

However, the participation of non-governmental organizations is “a critical element” in the work of the CSW, according to UN Women. “NGOs have been influential in shaping the current global policy framework on women’s empowerment and gender equality: the Beijing Declaration and Platform for Action.” NGOs traditionally take part in sessions of the CSW, attending caucuses and organizing their own parallel events. Post meetings, NGOs hold international and national leaders accountable for commitments made in the Platform for Action.

The statement cites evidence from WACC’s Global Media Monitoring Project that “the needle towards gender parity in the people seen, heard or read about in the news had shifted by only seven points in 20 years, implying that achievement of gender equality in presence and voice was still more than six decades away.”

Photo above: A civil society organisation participant asks a question during a UN Commission on the Status of Women town hall  at the UN Headquarters in 2018.  This year’s CSW has been scaled down following the outbreak of coronavirus disease, and events such as this have been cancelled.  By UN/Mark Garten