Getting to zero through interfaith collaboration (2012)
20079
post-template-default,single,single-post,postid-20079,single-format-standard,theme-bridge,bridge-core-3.0.1,woocommerce-no-js,qodef-qi--no-touch,qi-addons-for-elementor-1.5.6,qode-page-transition-enabled,ajax_fade,page_not_loaded,,qode-title-hidden,columns-4,qode-child-theme-ver-1.0.0,qode-theme-ver-29.2,qode-theme-bridge,qode_header_in_grid,qode-wpml-enabled,wpb-js-composer js-comp-ver-6.10.0,vc_responsive,elementor-default,elementor-kit-41156

Posted at 22:23h in Calls for Action by wacc_kn 0 Comments 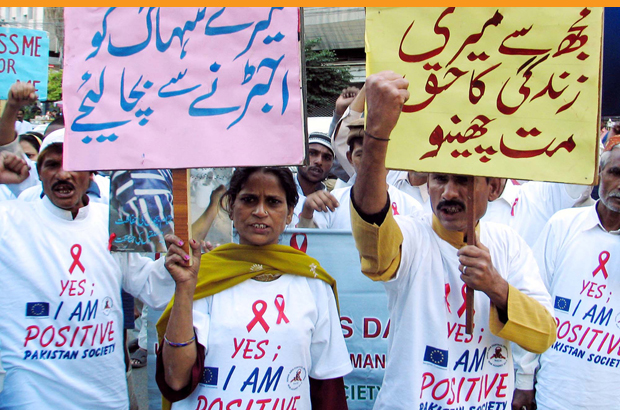 On World AIDS Day, 1 December 2012, the World Association for Christian Communication (WACC) calls on its partners and networks to integrate interfaith approaches in interventions to reduce stigma and discrimination against people living with and affected by HIV and AIDS.

“Getting to zero: Zero new HIV infections. Zero discrimination. Zero AIDS related deaths” is the theme until 2015. Anti-stigma interventions in communities where different faith traditions live side by side will increase their impact if they adopt approaches that recognize differences and leverage the strengths of an inclusive interfaith strategy.

WACC’s project partners provide many positive examples of interfaith cooperation in action. The Ecumenical Commission for Human Development (ECHD) in Pakistan brought together Christians and Muslims in Lahore in a collaborative anti-stigma initiative. It facilitated interfaith dialogue and convened an interfaith summit for youth and religious leaders.

Highlighting the importance of the interfaith approach, ECHD’s director Mr James Rehmat noted that, “Churches, mosques, temples and others work together, they can disseminate information about HIV to the broadest possible cross-section of the population, thus reducing the risk of leaving out isolated groups and eliminate inconsistency between the religions in the messages that are communicated.”

A second project underway in Lahore, Pakistan, organised by the AIDS Awareness Society is working with Christian, Muslim, Hindu and Sikh religious leaders to reduce gaps in knowledge about HIV-related stigma and discrimination. The project is expected to reach almost 50,000 people living in the communities which these leaders serve.

In Ethiopia’s Fantalee district, the Rift Valley Initiative for Rural Advancement (RIRA) worked with Christian, Muslim and the influential Gada traditional leaders to increase understanding of stigma and discrimination in pastoralist communities. RIRA’s executive director Mr. Abdi Ahmed commented, “The Religious leaders are highly visible and have a strong impact on their respective constituents. They have helped to overcome the negative views about HIV and AIDS held by pastoralist men and herders in particular and society at large. Change is visible in their public conversation about HIV and AIDS.”

In Lagos, Nigeria, a multi-year project implemented with Hope for HIV/AIDS International (HFA) with funding from UKaid’s Department for International Development is reaching out to Christian, Muslim and traditional leaders to help overcome HIV-related stigma and discrimination. Currently in its second year of implementation, the project is providing invaluable lessons on the willingness of leaders from different faith traditions to engage positively with each other.

Mrs. Lolade Abioye, HFA project administrator, observes the lesson that, “Irrespective of religious leaning, both Christian and Muslim faith leaders recognize the oneness of God, and they also acknowledge the leaders of both faiths. In the training workshops, the imams and pastors voice respect for the beliefs of each other’s faith traditions.”

Today there is considerable evidence from around the world that communication and interfaith dialogue change attitudes when it comes to tackling stigma and discrimination. Genuine and inclusive communication can create greater understanding and relieve tension in contrast with actions that tend to isolate vulnerable groups or, indeed, to incite violence against them.

On World AIDS Day, WACC encourages its members, partners and networks to explore and seize opportunities to create spaces for interfaith collaboration with the aim of reducing stigma and discrimination against people living with and affected by HIV and AIDS.

The WACC project partners mentioned above were sup[ported with funding from Evangelischer Entwicklungsdienst (EED), Germany, and Stichting Rotterdam, the Netherlands.