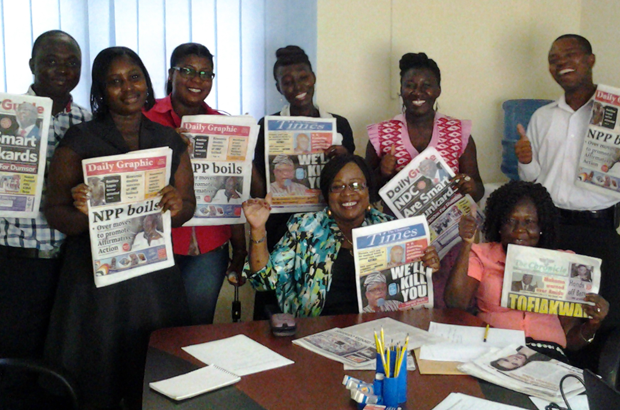 Gender equality in the news media was scrutinized on March 25 in more than 130 countries around the world.

National newspapers, television, radio and internet news broadcasts and tweets were analyzed by the Global Media Monitoring Project (GMMP) from Argentina to Zimbabwe, Bangladesh to Yemen, Barbados to the Solomon Islands, and New Zealand to Canada.

Teams of volunteers around the world measured how well national media are doing in the fair and balanced portrayal of women and men in the news. They monitored thousands of stories in hundreds of newspapers and news broadcasts.

“It is overwhelming to experience the energy of thousands of volunteer women and men who share one objective: to advocate for the fair and balanced portrayal of women and men in the media. 24 hours of media monitoring starting with the sunrise in Fiji and New Zealand and sunset over Alaska and French Polynesia!”, said WACC General Secretary, Karin Achtelstetter.

The GMMP is the largest research and advocacy initiative in the world on gender equality in news and journalism. It is organized by the World Association for Christian Communication (WACC) in cooperation with regional and national coordinators.

Community and gender equality organizations, researchers and media professionals, among others, are collaborating on an initiative whose ultimate goal is to advance gender justice by encouraging the fair and balanced gender portrayal and representation in and through the news.

The GMMP has found that women are largely invisible in the media. In 2010, it revealed that women make up only 24% of the people heard, read about or seen in the news. The new data gathered will generate solid evidence of whether and how much this has changed across the world.

GMMP 2015 will help maintain the spotlight on gender inequalities perpetuated in and through the news media and the growing demand for change. It will also update the data to be used for sensitizing new generations of journalists, creating awareness in media consumers, and for media policy and practice change advocacy.

Commenting on the day’s success, WACC General Secretary Karin Achtelstetter said, “March 25 – the global media monitoring day in 2015 – was not an end in itself, but the start of worldwide activities that aim to challenge and change the policies of media enterprises all over the world.”

National reports and a final consolidated report will be produced in time for the UN Summit for the Adoption of the Post-2015 Development Agenda which takes place in New York, 25-27 September 2015.

For updates from monitoring groups around the world visit: www.whomakesthenews.org and www.waccglobal.org

Watch a video animation about the GMMP here.