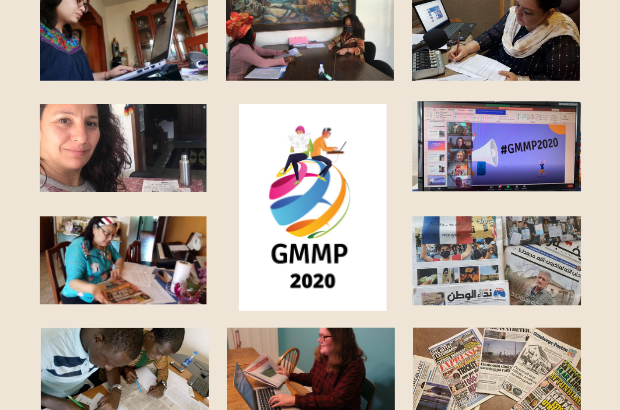 Posted at 11:16h in Communication Rights, Gender, Gender and media: Challenges and opportunities in the post 2015 era, News by Marites (Tess) Sison 0 Comments

Toronto — The Covid-19 pandemic did not put a damper on the 2020 Global Media Monitoring Project (GMMP), Tuesday, Sept. 29, attracting thousands of volunteers from 145 countries worldwide.

GMMP 2020 is the sixth in a series of extensive gender and media monitoring studies conducted every five years since 1995 by WACC Global, an international NGO that advocates communication rights in order to achieve social justice.

By analyzing gender differences in the portrayal and representation of women and men in print, broadcast, online and social media news, the GMMP puts a spotlight on gender inequalities perpetuated in and through the news media, and demands for change.

With the pandemic still devastating many parts of the world, news media monitoring took place virtually from Argentina to Zimbabwe.  The enthusiastic response by volunteers — civil society activists, media professionals, university researchers, and students — “attest to a committed and vibrant movement for gender equality in and through the news media,” says Sarah Macharia, GMMP global coordinator.

“This is an extraordinary GMMP due to the complications brought on by the coronavirus Covid19, having a profound impact both on the news agenda, and on the ability of the monitoring network to organise in the usual manner,” says Macharia.  “After a postponement of the monitoring day from April this year, a rethinking of the strategy for training and meeting, and an adjustment of the research tools to adapt to a news agenda dominated by Covid19 stories, the GMMP network set out on its task of building the evidence on gender equality gaps in print, broadcast and digital news content.”

GMMP findings will be analyzed to show global, regional and country-level change over the 25-year period since the first GMMP in 1995, and to direct action towards achieving gender equality in news content.

“The GMMP is one of the most significant achievements in the long journey towards gender justice and equality,” said WACC General Secretary, Philip Lee. “Its findings in 2020 will be all the more important when sustainable development, peace and security are being negatively affected by global geopolitical and economic setbacks that disproportionately impact women.”

Past monitoring results have shown extremely slow progress in bringing women’s voices to the foreground of public discourse taking place in traditional and digital media. GMMP research show a male-centric view of the world in the news; stories revealed gender bias and extensive stereotyping that perpetuate marginalization, discrimination, and violence against women and girls.

Preliminary results of the GMMP 2020 research are expected early next year.