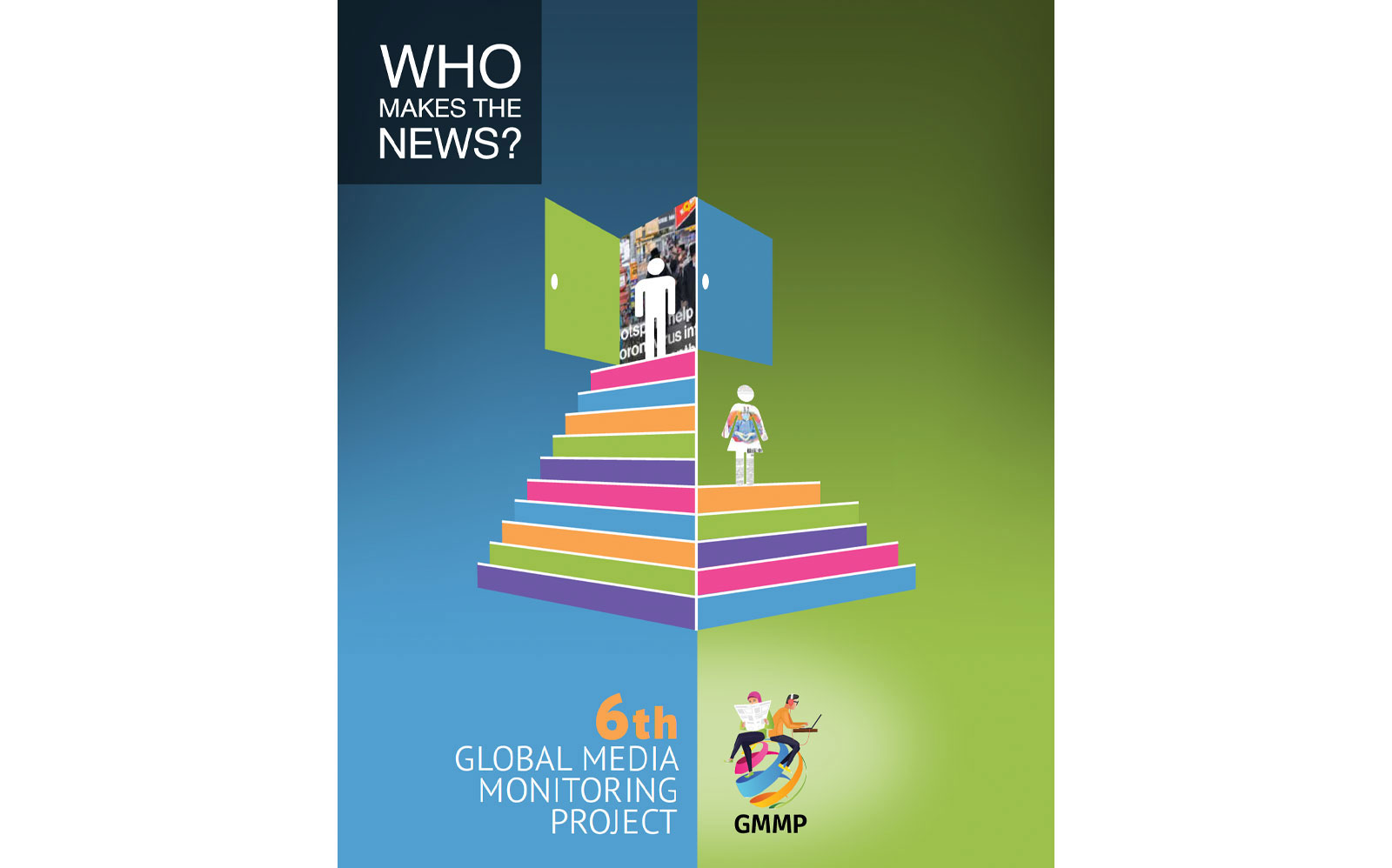 The emergence and rapid proliferation of Covid-19 made the implementation of the 6th Global Media Monitoring Project (GMMP) the most extraordinary since the initiative’s inception in 1995. Yet, despite the pandemic, the media sample was the highest ever. The research was implemented by 116 teams and covered 30,172 stories published in newspapers, broadcast on radio and television, and disseminated on news websites and via news media tweets.

Twenty-five per cent of stories in the sample carried a coronavirus sub- or principal theme. A tweak in the methodology still made it possible to analyse the stories along the classic GMMP major topic categories of politics & government, economy, science & health, social & legal, crime & violence and celebrity/media/arts & sports. The GMMP 2020 topics’ structure carved out a seventh major topic “gender & related”, in which to cluster stories specific to sexual harassment, rape, #MeToo and similar gender-specific news.

All things remaining equal, it will take at least a further 67 years to close the average gender equality gap in traditional news media.

In 2015, the period remaining to full gender equality based on the GEM Index1 was 72 years, thus the 2020 result signals consistency in the slow cumulative pace of change over time.

Full gender equality on numerical counts, however, is insufficient without improvement in the quality of journalism from a gender perspective.

At the global average level, mainstream news media are currently at the midway point to gender parity in subjects and sources.

Between 2015 and 2020, the needle edged one point forward to 25% in the proportion of subjects and sources who are women. The single point improvement is the first since 2010 and is most visible in broadcast news media.

Despite their three-point decline in the proportion of women subjects and sources since 2015, North American news media remain the best performers worldwide. European news media have made the most significant progress on this indicator since 1995 and Pacific region media in the past five years. Only Africa’s media have stagnated as the rest of the regions have improved by three to 12 points across the quarter century.

The proportion of women as subjects and sources in digital news stories also increased one point overall from 2015 to 2020, with a three-point improvement on news websites and a three-point decline in news media tweets.

The overwhelming majority of science/health news was related to Covid-19, the limelight story of 2020. The meteoric climb in this major topic’s news value due to the pandemic was accompanied by a fall in women’s voice and visibility in the stories. While the news share of science/health stories was significantly higher in 2020 compared to earlier periods (from 10% in 2005 to 17% currently), women’s presence in this topic declined by five points after a steady rise between 2000 and 2015.

Women’s overall presence in the news in North America and the Pacific has surpassed the critical 30% threshold in both digital and legacy media. Africa falls below the global averages across all media types monitored, as do Asia and the Middle East in print and broadcast news.

The only region and topic in which gender parity in subjects and sources has been attained is in North American digital social & legal news.

Transnational media perform poorly with regard to inclusion of women as subjects and sources.

Women were only 13% of subjects and sources in the television newscast monitored and 21% in the digital news stories and tweets coded from transnational media. While the results have improved, women’s invisibility remains even more marked in influential international media that serve formidable audiences.

#MeToo: The pattern of underrepresentation of women even in stories that concern them more spills over in news content on gender-based violence

Stories on gender-based violence (GBV) hardly make the major news of the day and when they do, women and girls are severely underrepresented as subjects and sources. Just 1% of the stories in the total sample were coded under the “gender and related” major topic that includes news on various forms of gender violence against women and girls.

Furthermore, that girls and women are underrepresented in stories about sexual harassment, rape and sexual assault particularly now, during Covid-19 times when such acts have reached epidemic proportions, signals a serious deficit in news media accountability to women. The most severe underrepresentation in GBV stories takes place in newspapers, in which women are just 35% of subjects and sources.

Teams in 81% of the participating countries took the opportunity provided by GMMP 2020 to collect data on indicators of interest in the national context. A number of these indicators made it possible to unpack the results using intersectional lenses, to understand news media treatment of subjects and sources on the basis of their other identities such as race, religion, class/caste, immigration and disability status.

Comparison of the GMMP findings against physical world statistics indicates that women are underrepresented across all the identity groups. In Latin America for example, only 3% of the people in the news are from Indigenous or tribal groups and of these only one in five is a woman. In the physical world, however, Indigenous peoples are estimated to be at least 8% of the region’s population, and women at least one half of the Indigenous population. The results demonstrate women’s multiple marginalization based on their subordinate identities in the respective contexts.

The failure to extend the opportunity for more citizens to tell their own stories in their own words, to tell the stories which are important to them and also to a broad range of people, compromises the value of the news to its multiple and diverse publics. The failure to represent the diversity of people and opinion present in society not only has implications for public discourse and decision-making, but it also plays a role in eroding trust in news journalism.

Women’s voices as spokespersons have increased by eight points since 2005, and as experts by seven points in the same period. In recent years, numerous initiatives to source women for expert opinion have sprouted around the globe and media organisations are visibly making efforts to diversify their experts’ pools, responding to external pressure as well as internal industry efforts to do better. Currently, 24% of expert voices in the news are women, a dramatic rise from 19% five years ago.

Overall, women’s presence as subjects, sources and journalists in stories related to Covid-19 may be higher than in stories that are not about the pandemic, but the quality of content from a gender perspective is worse. Stories about or regarding a dimension of the coronavirus focus on women four points less than stories not linked to Covid-19, and they are less likely to raise gender equality or inequality issues, or to clearly challenge gender stereotypes. Women are more likely to appear in pandemic stories related to social/legal issues, while the possibility that a story will be about a woman or will carry a woman’s voice is slimmest in Covid-19 stories that are also about politics and government.

While understanding and acknowledgement of women’s contributions have grown in the lived world, the same would not be said of the news media. An example is provided in pandemic stories: women are 27% of the health specialists appearing in coronavirus stories, far fewer than the 46% world average given in labour force statistics. Of the persons portrayed as homemakers, women are almost seven in 10, similar to the 2015 findings. Similarly, their ranks among the unemployed as portrayed in news reports have increased by about eight points in the past five to 20 years. In reality, World Bank modelling of the ILO’s sex-disaggregated labour force statistics suggests that unemployment rates have reduced for men by 0.4 points and even more for women by 0.5 points since the year 2000.

Gendered ageism in the news

2020 is the first time that the GMMP investigated the representation of people 80 years and above in the news. 2020 was also the first year of the global Covid-19 pandemic, where old age was considered a common denominator for being at risk. However, people in the oldest age group rarely got attention in the news: only 3% were above 80 years in newspapers, and in television news less than 1% were above 80 years of age. Women 80+ were even more invisible than the men in that age group.

Overall in print news, men who are 50 years and older are very likely to be in the news; 42% of all people in the news belong to this age group. The largest age category for women is 35-49 years, whereas men peak in visibility at 50 to 64 years. Over time in newspapers and on television, women above 50 have become more invisible. Only 3% of all women in the news are between 65-79, compared to 15% of the men.

Following stagnation between 2005 and 2015, women’s visibility as reporters has increased by three percentage points overall across print and broadcast news.

Currently, four out of 10 stories in traditional news media are reported by women, compared to 37% since 2005.

In the past two decades, women’s newspaper by-line credits have increased by 11 points, their visibility in newscasts has increased by 9%, and online, 42% of journalists named in news articles, seen or heard in multimedia clips are women.

A comparison between print and digital newspapers reveals that stories by women reporters are distributed more or less evenly across the major topics online and offline, as those by men are skewed towards the politics & government beat.

The reporter gender gap is exactly the same in Asia, Europe, and Latin America despite variations in the pace of change on this indicator across two decades. Pacific media have progressed slower than the rest of the world, but they are currently the second-best performers after their Caribbean counterparts.

GMMP findings across time indicate that women reporters are more likely than men to turn to women subjects and sources. In 2015, the results suggested that the gender source selection gap was narrowing, but in the 2020 wave, the gap has more than doubled to reach 7 points. Currently, 31% of the people in traditional news covered by women reporters are female, in contrast to 24% of subjects and sources in stories by men reporters.

There is a consistent 5-7% point gap between women and men reporters on female source selection in all regions except for the Caribbean, where men reporters are almost as likely as their women colleagues to select female sources.

The pattern is repeated on digital news platforms where there is a nine-point gap in gender source selection, with 34% of female sources in stories by women reporters compared to 25% in stories by men reporters.

Story quality from a gender perspective tends to be marginally higher in the output of women journalists, in terms of likelihood to clearly challenge gender stereotypes, to raise gender (in)equality issues and to make reference to legislation or policy that promotes gender equality or human rights.

Even with the gender difference, it is important not to lose sight of the overall decline or stagnation across time on these indicators in the output of all journalists, women and men alike.

Patterns of stagnation and decline are consistent across the GMMP measures of the quality of news journalism from a gender perspective.

News stories are as (un)likely to clearly challenge gender stereotypes today as they were 15 years ago.

Between seven to nine out of 10 stories on sexual harassment, rape, other forms of gender violence and specific gender inequality issues reinforce or do nothing to challenge gender stereotypes, with implications for the normalization and continuance of the very injustices that are the focus of the stories.

Reprinted from the final report of the 6th Global Media Monitoring Project (2020).

1. The Gender Equality in the News Media index (GEM Index) calculates the average gender equality gap based on six GMMP indicators: in people in the news (subjects & sources), in participation as reporters, in voice as experts and as spokespersons, and in presence in economic and in political news. Details on the calculation and individual country scores are indicated in the full report.