GMMP receives award for advancing role of women in the news
21513
post-template-default,single,single-post,postid-21513,single-format-standard,theme-bridge,bridge-core-3.0.1,woocommerce-no-js,qodef-qi--no-touch,qi-addons-for-elementor-1.5.3,qode-page-transition-enabled,ajax_fade,page_not_loaded,,qode-title-hidden,columns-4,qode-child-theme-ver-1.0.0,qode-theme-ver-28.6,qode-theme-bridge,qode_header_in_grid,qode-wpml-enabled,wpb-js-composer js-comp-ver-6.9.0,vc_responsive,elementor-default,elementor-kit-41156 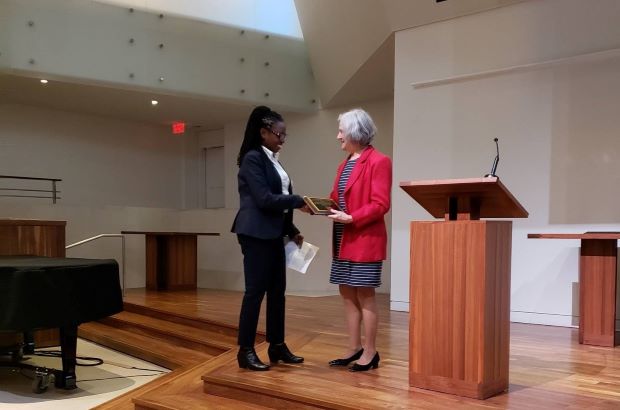 Posted at 10:45h in Gender, Media and Gender Monitor, News by Staff 0 Comments

WACC’s Global Media Monitoring Project (GMMP) received the Donald H. McGannon Award  today and its global coordinator, Sarah Macharia, described it as an affirmation of the project, the network of volunteers, and the movement for gender equality.

“It inspires us not to tire of mobilizing, of monitoring the media to gather the data on media’s gender blind spots, and using the evidence to advance a journalistic culture of respect for the rights and dignity of women and all,” said Macharia in her speech at the United Church of Christ’s (UCC) 37th Everett C. Parker Ethics in Telecommunications and Awards Breakfast in Washington, D.C., where the award was presented.

The UCC’s media justice ministry recognized with the award for its “special contributions to advancing the role of women and persons of colour in the media.

In her speech, Macharia drew a comparison between the GMMP and “a stream that becomes a river as tributaries merge into it, bringing life to the land through which it crosses.”

The GMMP network, which has tens of thousands of volunteers in over 100 countries, has “created a global community of critical media audiences able to read media content from a gender perspective,” said Macharia, who is also WACC’s gender and communication manager. It has amassed “the largest body of statistical data on gender in the news media,” which are used to hold news media accountable for observing journalism standards on fairness, balance and other tenets of professionalism in the industry, she said.
The GMMP is also used to lobby policymakers to include responsibilities of media when enacting gender equality and women’s rights legislation, she added.

“The GMMP is three things in one: It is a research project, it is an action network and it is an activist movement,” said Macharia. She also quoted media scholar and GMMP pioneer Margaret Gallagher, who described it as  “one of the most far-reaching collective enterprises of the global women’s movement.”

Macharia underscored the importance of the data acquired through GMMP research. “Thanks to the GMMP we now know that out of every four people seen, heard or read about in the mainstream news media globally, only one is a woman,” said Macharia.
Based on trends since 1995, when the first GMMP was organized, “we forecast it will take at least three quarters of a century to reach parity,” she said.

GMMP data have also shown, since 2005, that only 37% of news are reported by women, she said. “We are intrigued as to whether this is the global glass ceiling for women’s participation in the profession as reporters.”

Macharia encouraged those gathered at the event to “join us for the 2020 edition to find out.”

Underrepresentation and misrepresentation of women in the news have also crossed over into online news delivery platforms, including Twitter, she said.

The GMMP has also consistently shown that “news media performance on gender equality is more or less identical the world over, whether in the USA, in Uruguay, or in Uganda,” said Macharia.

Macharia paid tribute to the members of the GMMP network, which is drawn from a diverse group from civil society, universities, the media industry and faith groups. “Visualize Indigenous women’s groups from Latin America, communication and journalism students and their professors across Europe, early career journalists in the Middle East, media women’s associations and journalist unions in Africa, feminist research networks in the Caribbean, and women’s NGOs worldwide coming together for this single purpose,” she said.
She also described the GMMP’s ripple effect. “The network convenes for the global monitoring, returning back to their spaces equipped with enhanced skills and resources,” she said. Civil society shares the knowledge gathered from the GMMP and steps up advocacy, the academia uses them to teach and enhance research, and media development spaces use them to help journalists “discover the gender dimensions in their stories,” said Macharia.

The award received by the GMMP is named after Donald McGannon, an award-winning broadcast industry executive who advocated for social responsibility in the media.

Cayden Mak, executive director of 18MillionRising, received the Everett C. Parker Award for his work in providing a voice to persons of colour and other underrepresented communities.

The Parker Lecture was created in 1982 to recognize the Rev. Dr. Parker’s pioneering work as an advocate for the public’s rights in broadcasting. Parker, a former director of WACC, founded the UCC’s Office of Communication, Inc., 60 years ago to successfully challenge the broadcast license of a Jackson, Mississippi, television station for failing to serve the public interest and cover the local African-American community.