Posted at 22:34h in WACC Caribbean by wacc_kn 0 Comments 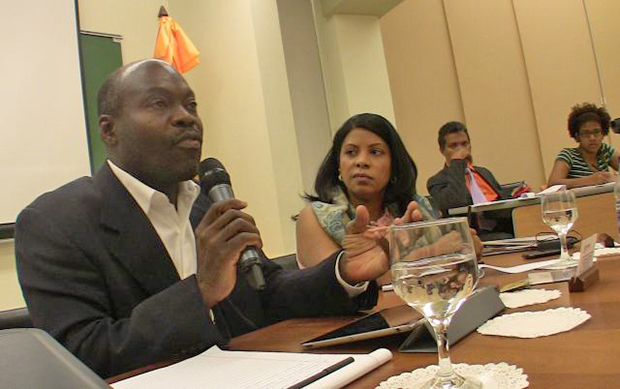 WACC member and former director Gotson Pierre of Haiti has been designated an “information hero” by the media freedom organization Reporters Without Borders.

For the first time, Reporters Without Borders has published a list of profiles of “100 information heroes” for World Press Freedom Day, May 3. The Paris-based organization said that “through their courageous work or activism, these ‘100 heroes’ help to promote the freedom enshrined in article 19 of the Universal Declaration of Human Rights, the freedom to ‘to seek, receive and impart information and ideas through any media and regardless of frontiers.’”

Gotson Pierre is a Haitian journalist and PR consultant. The citation said that after the 2010 earthquake, he realized his main priority should be to compensate for a lack of news and information.

The disaster devastated his country, destroying the homes of more than 1.5 million Haitians who were forced to find shelter in survivor camps dotted throughout the capital, Port-au-Prince. “The day after the tremor, Pierre set up a mobile telecentre among the ruins for those who had been displaced.

It continues in operation. Equipped with a dozen Web-connected computers, it tours the capital’s six survivor camps every day. “The telecentre is an oasis for exchanging information amid a ruined infrastructure and media. It is used for exchanging information about victims of the quake, its aftermath and the distribution of humanitarian aid. It has also been a means of introducing many Haitians to new technology,” read the citation.

This article noted that in December 2001, Pierre created the Groupe Médialternatif in Port-au-Prince and its offshoot, the Alterpresse news agency, which he continues to coordinate. An advocate of media democratization and access to the Internet for everyone, he went on to set up the Télécentre des Jeunes in 2003 to help young Haitians acquire information and communication technologies. This unit functioned without interruption until the January 2010 earthquake, which destroyed the Groupe Médialternatif premises.