Posted at 09:03h in News by Solange De Santis 0 Comments 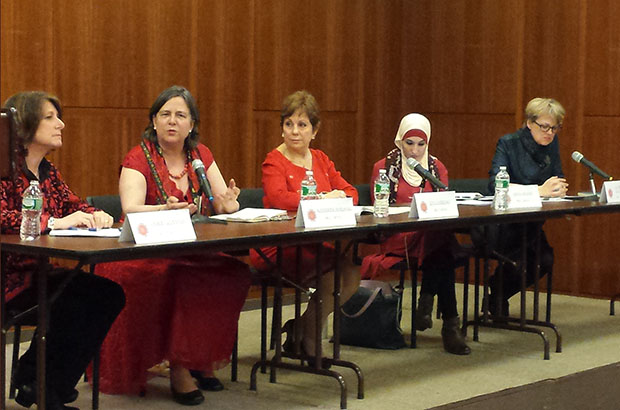 Faith groups that seek to cooperate on social justice issues sometimes have to navigate religious differences as powerful as the causes they espouse, according to a panel of experts at the Religion Communicators Council annual convention meeting in New York from March 31 to April 2.

The key principle for interfaith activism should be “how can my tradition and your tradition join together to uplift those less fortunate?” said Linda Sarsour, executive director of the Arab American Association of New York.

Sarsour said that among the challenges her organization faces is that as a Palestinian Muslim who has criticized Israeli government policies, she is “sometimes not welcome” in interfaith circles. “I’ve been called an anti-Semite. Some bloggers say that a group such as Jews Against Islamophobia are not ‘mainstream Jews.’ Somehow I’m not working with the ‘right Jews’ or the ‘right Christians,’” she said.

Dubensky responded that “you can know that I am Jewish,” but that people often erroneously tend to see individuals as representative of communities. Henderson noted that the Israeli-Palestinian conflict can make dialogue difficult, but a key question for interfaith groups and society is “how do you stay at the table with people you disagree with?”

Henderson said activists should ask about the place of atheists and humanists in the interfaith movement. “Who are we willing to welcome. The interfaith tables are not as radically inclusive as they should be and we need to push ahead on that,” she said.

The speakers said they often combat negative perceptions of faith. “Religion is seen as basically divisive, about proselytizing or money. It is seen as dangerous – against modernization and against women’s rights. Or it is defunct – less important in the context of modernization. And it is seen as emotional,” said Marshall, whose organization seeks to connect development and religion.

Dubensky noted that Tanenbaum counsels companies on how to accommodate religious differences in the workplace, such as the company that was advised on setting aside a bathroom for Muslims to wash their feet before prayer and using it as an education opportunity for all employees. She also said that she worked with an evangelical Christian pastor who “broadened my capacity to understand bias and where I had my own blind spots.” She added, “we need to balance our differences so we treat each other with respect.”

Goodstein, noting that “activism is actually accomplishing something,” said she has seen traumatic religious-based events “that could explode and don’t” due to the work of activists. Sarsour pointed out that Muslim holidays have now been incorporated in the New York City school calendar. Henderson recalled that at the huge 2014 climate change march in New York, a group of Muslims put down prayer rugs, while other demonstrators “formed a circle, creating a prayer space around them.”

Speaking to the religion communicators in the audience, Henderson said “we are trying to figure out how to capture the attention of the media in a more positive way.”