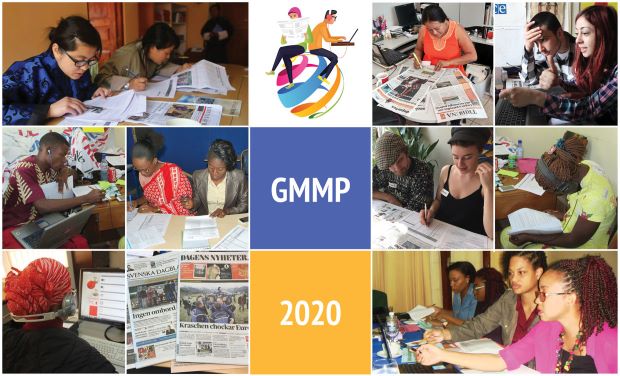 Please consider donating to the GMMP’s campaign via Fundly, a crowdfunding site for online fundraising.

“If just 50,000 people worldwide are able to contribute $10, GMMP 2020 is guaranteed success,” said Philip Lee, General Secretary of WACC, which is leading the campaign.

Fundly also allows donors to help spread the word about the campaign to friends and family via Facebook, Twitter, LinkedIn and other social media networks.

Your donations will help build a real-time online data analysis portal and purchase supplies for volunteers in 140 countries tracking gender gaps in presence, voice and representation in news media for the GMMP.

Organized by WACC, GMMP is the largest and longest-running research and advocacy initiative on gender equality in the world’s news media.

“The #MeToo movement has ignited global dialogue about the violences that girls and women face in their daily lives, which makes the GMMP important now more than ever,” said Sarah Macharia, GMMP coordinator. “Media sexism contributes to normalizing and perpetuating such gender-based violence.”

The GMMP aims to advance gender equality in and through the media by gathering the evidence on disparities in portrayal, representation and voice of women in contrast to men. GMMP evidence is applied to change unfair and unbalanced media treatment through policy advocacy, training and public awareness.

Underrepresentation of women results in an imbalanced picture of our world, said Macharia. Misrepresentation and gender stereotyping perpetuate inequality and discrimination against women, she added.

The GMMP is implemented collaboratively with grassroots and national-level women’s rights groups, other civil society organisations, associations and unions of media professionals, university students and researchers around the world.