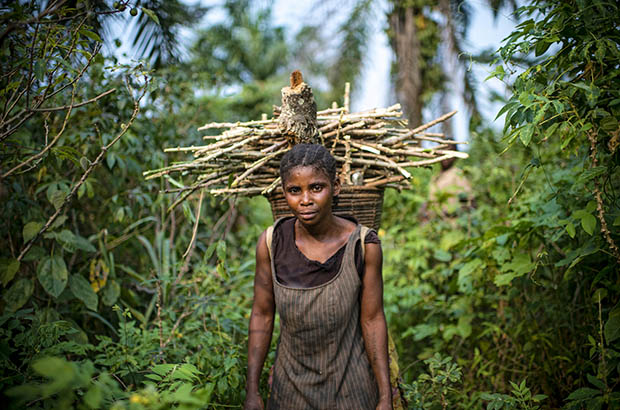 A woman gathers wood for fuel in the Democratic Republic of Congo. Photo: Ollivier Girard/CIFOR.

“Unlike the MDGs, the new goals introduce a human rights perspective and refer to human rights standards. In previous reports, like the High Level Panel report of eminent persons of 2013, this perspective was not taken into account in any depth,” writes Duchrow, who heads the human rights and peace unit of Bread for the World in Germany.

The states are in a crucial phase of negotiations, with the second round of discussions on the SDGs beginning in February 2015.

“From a human rights perspective, one precondition to end poverty and achieve sustainable development is to focus on overcoming inequalities, relying on existing human rights standards. The reason for this is that the standards have been agreed upon through a long process of negotiations and in many cases are universally applicable,” Duchrow observes.

The other reason, she says, lies in the nature of human rights, which define rights holders and duty bearers: It is a system that makes the resources that have to be allocated and the individual rights that have to be fulfilled very clear and predictable. Furthermore, with regard to a strong right to non-discrimination, this is an important tool to overcome inequalities because resources cannot be allocated in a discriminatory manner.

“Since poverty in the last phase of the fulfillment of the MDGs has been reduced in some areas, the disparities in the allocation of resources and goods and, therefore, inequalities among rich and poor have increased. This phenomenon can be seen globally, but is also the case in fast-growing economies.

“This has an influence not only on the way the economic, social and cultural rights of all people are respected, for example when it comes to the supply of basic services by the state, like water and other infrastructure, but also greatly influences respect for and protection of political and civil rights,” Duchrow observes.

Through a lack of cohesion, for example, conflicts increase. In many countries, for those who oppose a system of exclusion and inequality, the possibility to protest and to organize counter activities has been restricted as result too.

Rooting the goals in human rights standards (which is supported by many civil society organizations) will make sure that the right to food, to clean water and to meaningful education are met. It will be of the utmost importance that the Sustainable Development Goals be a binding instrument, so that governments cannot implement them in a “pick and choose” fashion, but only by looking at the goals as a unit.

To access the rest of the article, including Duchrow’s analysis of what is needed in the final document defining the SDGs, subscribe here to Media Development.