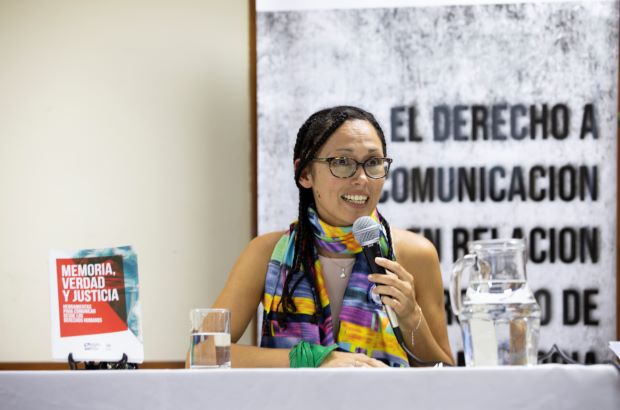 A human rights NGO has published a guide for reporting on Argentina’s memory, truth and justice process amid “alarming” efforts  to deny or downplay abuses committed during the country’s military dictatorship.

Media have “provided visibility” to declarations made by some Argentinian officials that the detention and disappearance of victims during the country’s “Dirty War,” are false, said the Asamblea Permanente de Derechos Humanos (APDH), which published the guide. There have been efforts not only to “minimize the violence exercised by the state” during that period, but also to discredit human rights organizations, it added.

From 1976-1983, an estimated 30,000 Argentines, including about 500 children, went missing or were “disappeared” under the regime of Gen. Jorge Videla, according to human rights groups.  “Disappeared” refers to the abduction, detention or murder of Argentines by military or paramilitary death squads with authorization from the state.

The APDH said the guide would help address “a lack of resources and arguments on the part of the press who are committed to our values.”  A lot of time has passed since the dictatorship and the new generation of journalists may lack the historical knowledge and perspective to put information in context, it said.

“The struggle for memory, truth, and justice is essential for the strengthening of democracy in Argentina,” stressed the APDH.

The guide, Memory, Truth and Justice — Communication Tools  From A Human Rights Perspective noted media’s role in enabling greater public participation, and “democratizing the debate and collective construction of memory.”

The task of informing is essential to help people recognize “the consequences of military-civilian dictatorship” and how its dark legacy continues to influence the current social, economic, political and cultural spheres of Argentinian society, it said.  “The more the information is produced and disseminated, the greater the possibility for reflection on our present.”

APDH expressed hope that the guide would help broaden arguments, improve reporting, and provide more resources that would facilitate and energize communicators.

Included in the guide are chapters on communication rights, media treatment of victims of state-committed violence, trials of crimes against humanity, possible strategies for covering events associated with memory, truth and justice, recommendations for covering a public trial, and a list of human rights organizations.

The manual is part of an APDH project, supported by WACC, which “sought to raise awareness about the importance of this process in order to influence public opinion and policy implementation,” said Lorenzo Vargas, WACC Program Manager for Communication for Social Change.

The national process of memory, truth and justice began after Argentina’s return to democracy, when then President Raul Alfonsin (1983-1989) created the National Commission on the Disappearance of Persons. Alfonsin promoted the investigation and punishment of crimes committed under the military regime.

“This process has, over the years, been a source of controversy and its implementation and achievements have varied significantly depending on the political learnings of the national government at any time,” said Vargas. “Today, following more than a decade of progress in the implementation of the process, there is a sense among human rights defenders that progress is slowing down, is receiving less attention and that there is a real risk that the achievements of the past years could be reversed.”

In 1985, former Gen. Jorge Vidal was among nine members of the military junta who were tried for crimes against humanity and sentenced to life in prison. But a year later, under pressure from the military, Congress passed laws that put a stop to the prosecution of rights abuses committed during the dictatorship. In 1990, then president Carlos Menem pardoned Videla and other imprisoned junta members.

In 2001, a judge ruled that the two laws were unconstitutional, arguing that crimes against humanity are not subject to amnesty.  Two years later, Congress revoked the amnesty laws.

The guide was produced after a research process that involved legal experts, journalists and activists, said APDH. It is available in Spanish and in English.

Watch a video of the launch here.

Photo above: Gisela Cardozo, president of Asamblea Permanente de Derechos Humanos, at the launch of the guide, Memory, Truth and Justice, Communication Tools From a Human Rights Perspective. Photo by APDH