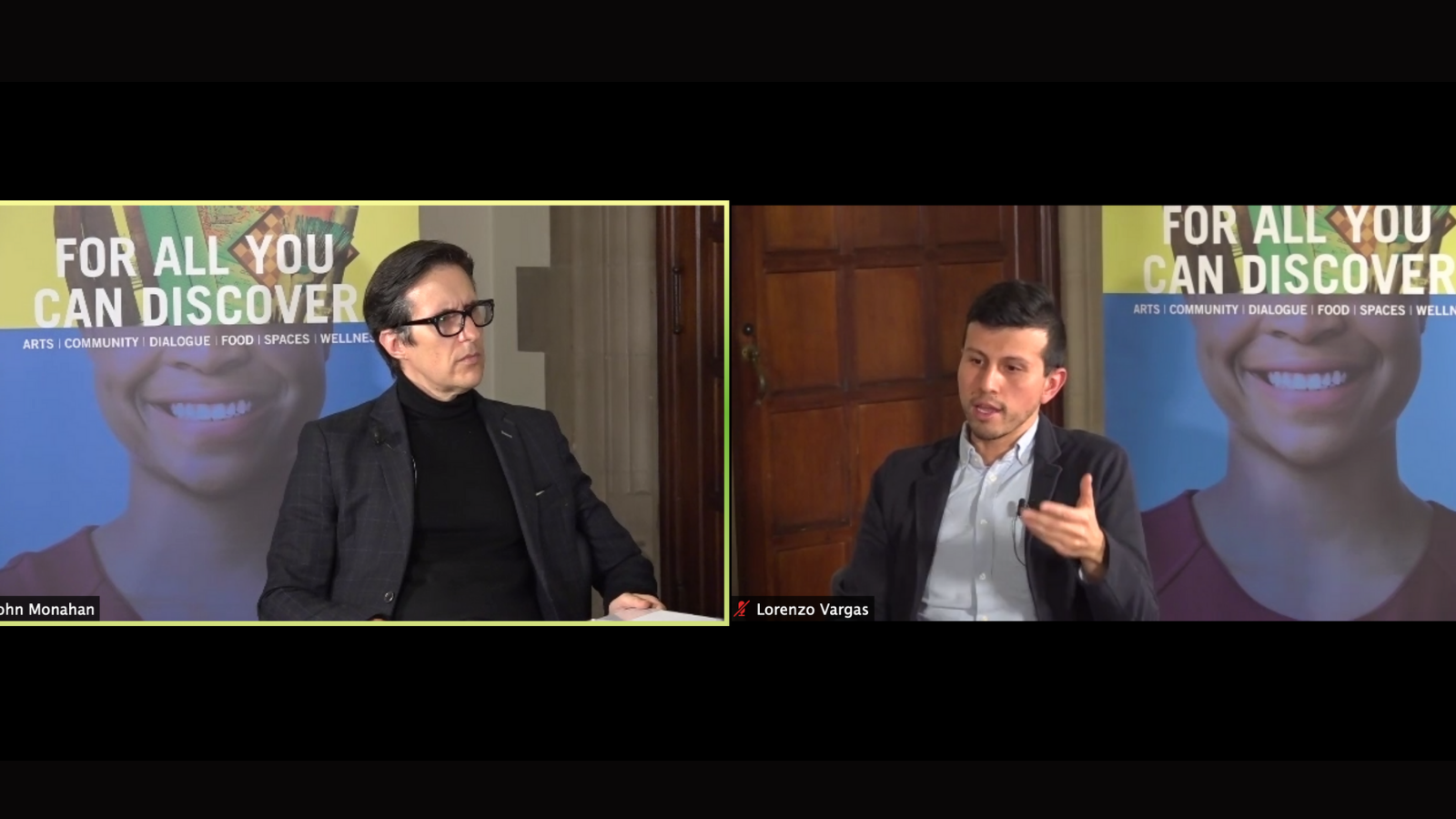 Vargas discussed” information poverty, a rights-based approach to communication” as the first guest of Hart House’s “Changemakers” series, described as “fireside-style chats between Hart House Warden John Monahan and inspiring folks whose discontent with the status quo propels them to be the change they want to see in the world.”  Established in 1919, Hart House is the University of Toronto’s centre for arts & culture, recreation & wellness and debate & dialogue.

The conversation between Monahan and Vargas also explored issues around democratizing access to media and other sources of information, and WACC’s work of enabling marginalized, poor, and excluded communities around the world have access to communication platforms and technologies to help them make informed decisions and to improve their lives.

Vargas noted that people often view poverty as not having enough money or proper housing and employment. But, he said, “a lot of it actually is about having no voice…feeling powerless… having no space or avenue to share your concerns, like your voice doesn’t count.” It’s also about not having access to media, not having access to information you can understand, and not being represented at all in the media, he said.

Feeling heard and feeling seen, “is an essential element of human dignity,” said Vargas. He cited the example of Mexico, which has only a few media houses, “most of which are owned by a few wealthy families, many of which are connected to the political class, and to business interests.” It’s a situation where “there’s really not much space for grassroots communities to express their views, to be seen and heard,” he said. “Those groups that are in power use media to shape public agenda, to shape public debate.”

Mexico, where WACC has been in partnership with NGOs for decades, is a place where there are no spaces for Indigenous languages to be heard in the dominant media, he said. He noted other issues, such as sexism, violence against women and violence against journalists, which contribute to marginalization of people.

But the issue is not simply about representation, he added. “It goes way beyond just seeing people who look like you or come from your background, whether it’s social or mass media. It goes to the actual means of creating messages and actual [telecommunications] infrastructure.”

The communication information system needs to be seen as “a public good, much like water,” he said. Monahan responded by saying, “So, I infer that what you’re saying is that having access to these means of communication and media. That’s not a privilege.” Vargas replied, “Precisely.”

Vargas said that while the starting point to a rights-based approach to communication is Article 19 of the UN Declaration on Human Rights that speaks about freedom of expression and access to information, there are other rights that also need to be guaranteed. These include fair representation in the media, and having access to a free, transparent, and pluralistic media, he said, “otherwise, we end up having people who are already powerful and whose right to freedom of expression ends up being way louder than a poor, marginalized person who has no platform.”

Vargas shared some of WACC’s work around media and communication and democratization of systems, including but not limited to providing technical support, mobilizing financial support for projects, and building networks of solidarity.

Asked whether there are countries that are doing better in terms of democratizing access to information, Vargas cited Australia, which is trying to regulate social media platforms like Facebook and Google by redirecting some of the ad revenues towards public service journalism. “As we all know, the media and journalism sector has been decimated over the past 20 to 25 years as a result of the rise of digital communications because a lot of the advertising revenue that used to go to media houses now goes to tech giants,” he said. Redirecting those funds to media organizations that provide journalism that serves the public good should be something that other countries like Canada should do to ensure their viability, he said.