Information and Communication Campaign for the Fight against HIV and AIDS
20318
post-template-default,single,single-post,postid-20318,single-format-standard,theme-bridge,bridge-core-3.0.1,woocommerce-no-js,qodef-qi--no-touch,qi-addons-for-elementor-1.5.6,qode-page-transition-enabled,ajax_fade,page_not_loaded,,qode-title-hidden,columns-4,qode-child-theme-ver-1.0.0,qode-theme-ver-29.2,qode-theme-bridge,qode_header_in_grid,qode-wpml-enabled,wpb-js-composer js-comp-ver-6.10.0,vc_responsive,elementor-default,elementor-kit-41156

Posted at 12:31h in Uncategorized by wacc_kn 0 Comments 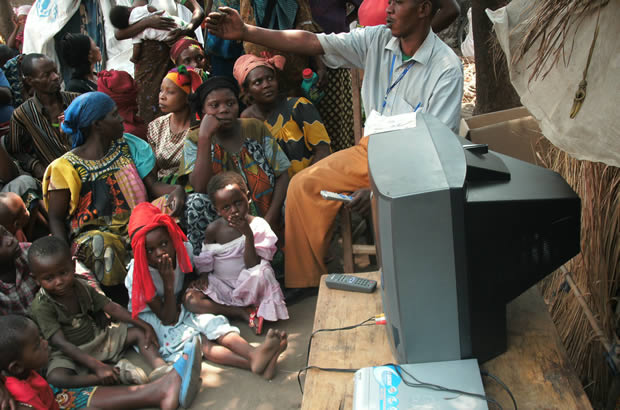 Stigma and discrimination against people living with HIV and AIDS (PLWHA) persist in Fizi despite the adoption of a law in 2008 upholding the rights of PLWHA. The project by Fondation Solidarité Familiale (FOSOF), an organisation created by rural youth for rural communities, was designed to challenge stigma and discrimination through advocacy, radio broadcasts of testimonies on living positively and promulgation of information about laws in place to protect the rights of PLWHA. 18 advocacy meetings with key community influencers were held, 50 PLWHA gained capacity through training about living positively, stigma and laws in place to protect their rights. 15 psychosocial support assistants were trained who are now supporting 310 PLWHA regularly. 30 radio programmes were broadcast containing testimonies of 20 PLWHA about living positively. The programmes were produced in collaboration with the local women PLWHA group, the PLWHA association and the local Radio Umoja. 1400 people including key local influencers gained awareness and knowledge about ways to combat stigma and discrimination against PLWHA.