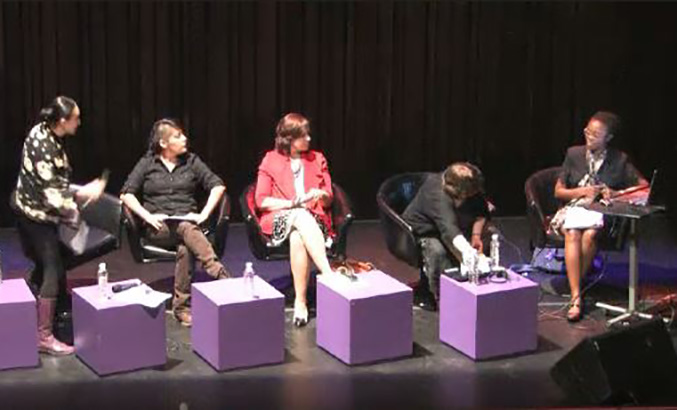 Preliminary results from the Global Media Monitoring Project (GMMP) 2015 reveal an increase of just 1% from five years ago when only 24% of the people heard or read about in print, radio and television news were female.

This startling finding was announced at the International Forum on “Gender, Media, ICTs and Journalism. 20 years after the BPfA”, which took place in Mexico City, 27-28 May 2015.

Speaking at the Forum, WACC’s Gender and Communication programme manager, Dr Sarah Macharia, presented figures computed from a sample of 35% of the nearly 140 countries expected to be in the final dataset.

The panel title was “Gender representation in media content”, and the other panellists were Lisa McLaughlin of Miami University, Dafne Plou representing Association for Progressive Communication, and Luisa Vazquez Herrera from La Critica/Djovenes. The moderator was journalist Karla Iberia Sanchez.

Macharia told participants that, “In 2015, only 25% of people heard, spoken of or read about in the news are women,” but cautioned that “while numbers may shift in the final results, they are not likely to be dramatically different for most of the indicators.”

She described what appears to be “a link between the negligible change in women’s presence in stories about politics and government that form the bulk of the news agenda and the deceleration of the evident but slow pace of change noted in the two preceding periods.”

The International Forum reviewed the implementation of Section J of the Beijing Platform for Action (BPfA) and its critical areas – gender balance in media content, women in media structures, gender media policy, gender and digital communication, gender and freedom of expression, including current challenges.

Participants highlighted areas for an action agenda that could contribute to the achievement of the post-2015 development agenda and its promotion of gender equality in and through the media.

They also launched the Latin American and the Caribbean chapter of the Global Alliance on Media and Gender (GAMAG), whose Steering Committee WACC joined in 2014.

Organized by WACC, the Global Media Monitoring Project (GMMP) is the world’s largest and longest-running research and advocacy initiative on gender in the news media.

The data are applied by gender equality organisations, women’s rights groups, education institutions and other agencies.

GMMP 2015 took place in March. National reports and a final consolidated report will be produced in time for the UN Summit for the Adoption of the Post-2015 Development Agenda which takes place in New York, 25-27 September 2015.

Dr Macharia said the preliminary findings are “mixed, sobering and clearly demarcate the complementary roles researchers, civil society, media, allies and power holders could and should play for the elusive significant positive change to become attainable.”

“The preliminary results make clear that 20 years after Beijing, there have been gains, but the road to quantitative and qualitative media gender equality remains arduously long,” she commented.