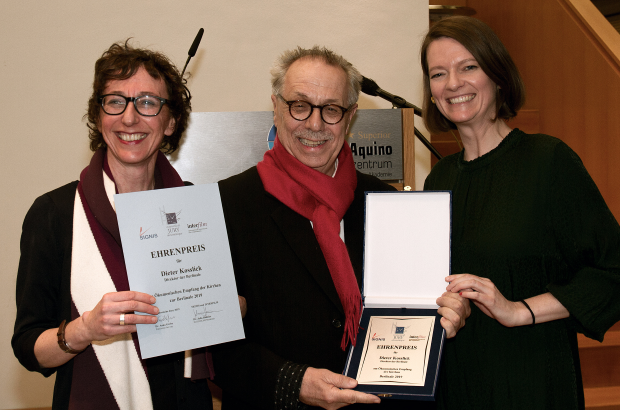 INTERFILM, the international network for dialogue between church and film and a WACC partner, and SIGNIS, a global network of Catholic media professionals, presented Kosslick with the award for his “lasting and substantial support” of the Ecumenical Jury at the film festival.

Kosslick, who has run the Berlinale since 2002, will step down as director when the festival ends February 17.

The Ecumenical Jury, appointed by INTERFILM and SIGNIS, with the support of WACC, gives awards in the Competition, Forum and Panorama sections of the Berlinale.

“The best known and most frequently mentioned feature of the Berlinale under Dieter Kosslick is its self-image and its profile as a political festival,” said Prof. Dr. Julia Helmke, INTERFILM President, in a speech at the reception. “The value and significance of this stance can perhaps only be recognised today, after numerous political, moral and cultural certainties have been shaken up.”

Helmke noted how past winners of the Ecumenical Jury Prize “illustrate the festival’s alliance with committed political cinema.” She cited the Afghan refugee docu-drama, In This World, by Michael Winterbottom in 2003; the intercultural love story set in Glasgow, Just a Kiss, by Ken Loach in 2004; the historical drama about an anti-Nazi resistance fighter, Sophie Scholl, by Marc Rothemund in 2005; and the portrayal of trauma in the aftermath of the Yugoslavian civil war, Grbavica – Esma’s Secret, by Jasmila Zbanic, in 2006.
Kosslick “has built a bridge to the origins of the festival as a ‘showcase of the West’ in the Cold War – and at the same time freed it from its ideological blinkers,” Helmke noted.

Helmke also cited Kosslick’s talent as an entertainer, calling him “the best promoter” of the festival.

The Berlinale under Kosslick “has spanned the arc of perception, experience, knowledge and contradiction as far as possible, as an advocate of cultural diversity and sympathy, as a beacon of the broadest horizon,” said Helmke.

Kosslick once referred to the film festivals as “Church Days of Film Culture,” said Helmke, noting “this statement resonates with a pathos encompassing the world and humanity.” At church days and at the Berlinale, “we are confronted, as closely as possible, with everything, all the suffering, all the happiness, all the fears and hopes of the people,” she said.

Meanwhile, hollywoodreporter.com reported that Kosslick has signed the 50/50 by 2020 gender parity pledge. The pledge does not impose gender quotas, but commits festivals to equal female and male representation in top management and to reveal the gender of directors of films submitted each year.

Kosslick noted that in this year’s Berlinale, 7 out of 17 films nominated in the categories of Best Film or Best Director are directed by women, said the report. He also said that women make up more than 80 per cent of the festival’s film selection committee, which oversees the competition and juries. “But there is still a lot to do to have gender equality,” he said.