Having discussed these issues together with the assistance of ARTICLE 19: Global Campaign for Free Expression and the Centre for Law and Democracy; Recalling and reaffirming our Joint Declarations;1

Underlining the critical role that the right to freedom of opinion and expression plays in the promotion and protection of human rights and dignity, the advancement of sustainable development, and the supporting and strengthening of democratic societies;

Highlighting that freedom of expression is critical for women’s empowerment, equality, enjoyment of economic, social and cultural rights, as well as for civil and political rights, and full participation in public life;

Noting that gender equality and the right to freedom of opinion and expression are mutually reinforcing, indivisible and interdependent;

Emphasising that gender justice signifies transformative changes to remove structural and systemic barriers and create an enabling environment in which women (and others who suffer discrimination on account of sex or gender) can exercise their rights and participate fully and equally in the private, public and political sphere;

Recognising the importance of the internet and digital technology in bolstering freedom of expression and access to information globally, and promoting the empowerment of women and others who experience discrimination and marginalisation;

Deploring the structural obstacles, including sexual and gender-based violence, misogyny, entrenched bias, social prejudices, patriarchal conventions, and interpretations of cultural and religious norms, as well as discriminatory laws, policies and practices and unequal access to digital technology and participation in the media that prevent women’s equal enjoyment of freedom of expression;

Deeply concerned that online gender-based violence, gendered hate speech and disinformation, which cause serious psychological harm and can lead to physical violence, are proliferating with the aim of intimidating and silencing women, including female politicians, journalists and human rights defenders;

Condemning online attacks and harassment of women journalists as one of the most serious contemporary threats to their safety and damaging to media freedom;

Noting that independent, free, pluralistic and diverse media are essential in a democratic society and that gender inequality diminishes media pluralism and diversity;

Alarmed at the increasing use of frivolous and vexatious lawsuits to dissuade women from participating in public life or from speaking out against alleged perpetrators of sexual and gender-based violence;

Recognising the need for inclusion and sensitivity to the intersectionality of gender and other characteristics that cause or exacerbate women’s experience of discrimination, including race, religion, ethnicity, sexual orientation, disability, age, legal and socio-economic status or other factors;

Noting that both sex and gender have been the basis for inequality and discrimination in the exercise of freedom of opinion and expression and that while the Declaration focuses primarily on women, where appropriate, reference is made to gender non-conforming people (lesbian, gay, bisexual, transgender and questioning or LGBTQ+ individuals);

Noting further that the term “women” in the Declaration also refers to girls in the appropriate context;

Adopt, on 03 May 2022, the following Declaration on Freedom of Expression and Gender Justice. 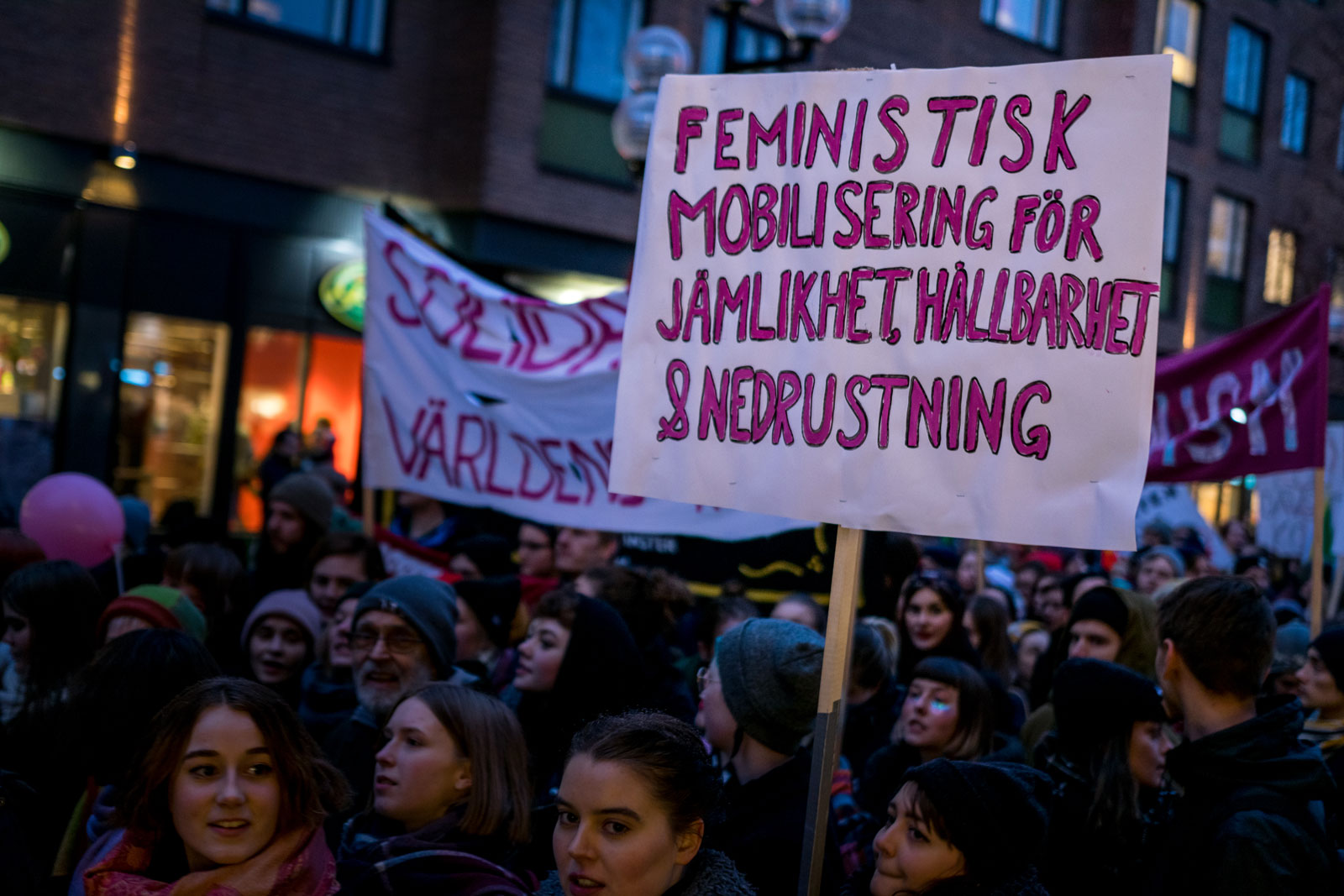 Elimination of discrimination and prejudice

States are obliged under international law to proactively remove the structural and systemic barriers to equality as well as discriminatory laws, policies and practices that impede women’s full enjoyment of all human rights, including the right to freedom of opinion and expression. The obligation entails positive duties to eliminate gender stereotypes, negative social norms and discriminatory attitudes in society through education programs, social policies, cultural practices, and laws and policies that prohibit discrimination and sexual and gender-based violence and to promote equality and inclusion.

Eliminating discrimination against women requires a “whole of society” approach. States, the private sector and civil society should work together to address discrimination, stereotyping and interpretations of culture, religion and tradition that subordinate and disempower women and are a root cause of sexual and gender-based violence as well as gendered censorship.

States should protect and promote the participation and equality of women in the media sector through laws, policies and practices that protect the safety of women journalists, incentivise gender equality and encourage and protect expression by and about women.

Media outlets and companies should take targeted measures to increase women’s representation as managers, journalists, media workers, sources, experts and interviewees in the news. Through coverage, analysis, professional codes, professional development of women journalists and media workers, and other means, the outlets and companies should play a transformative role in dismantling gender stereotypes and opposing gender bias and violence against women and gender non-conforming people.

Internet intermediaries should be particularly mindful of the way that their services, automated or algorithmic processes and business practices to increase user engagement, target advertising or engage in profiling may amplify gender stereotypes, bias, misogyny and gender-based violence. Companies should ensure that their content moderation and curation policies and practices do not discriminate on the basis of gender or other protected attributes.

Furthermore, women and intersecting marginalised groups are often underrepresented or misrepresented in data that companies use, which is a factor in amplifying gender inequality, stereotypes, bias, misogyny and online gender-based violence in automated and algorithmic processes. Companies should ensure that data upon which automated or algorithmic processes rely are representative.

Access to information is critical to women’s agency and empowerment and lies at the core of the right to freedom of opinion and expression. States should accelerate and enhance their efforts to close the gender digital divide and ensure that women have affordable, open, secure and high-quality access to the internet without restrictions or shutdowns. To be impactful, such measures should also address political, socio-economic, linguistic and cultural barriers that prevent women’s equal access to information communication technology.

States, internet intermediaries and civil society organisations should encourage and proactively support the digital and information literacy of women and girls.

States should facilitate access to information and ideas of all kinds by and about women and gender non-conforming people, including on sexual and reproductive health, gender roles, education, employment opportunities, and economic data. Given the importance of social inclusion, diversity and democratic participation, States should pay particular attention to protecting the full and free expression and access to information of women and gender non-conforming people.

States should ensure that gender-disaggregated data is collected and made publicly available on all matters of government policy and practice which impact women’s political participation, socio- economic development and human rights. Attention should be paid also to ensuring the availability of gender-disaggregated data on digital inclusion and participation in the media.

Any restriction of freedom of expression should meet fully the three-part test of lawfulness, legitimate objective, necessity and proportionality, as set out in Article 19(3) of the International Covenant on Civil and Political Rights (ICCPR).

States, as well as public and private academic institutions, should respect academic freedom of expression and refrain from censoring, restricting or discriminating against gender studies and feminist scholarship or public debate on these issues.

Women who publicly denounce alleged perpetrators of sexual or gender-based violence should not be charged with criminal libel, prosecuted for false reporting of crimes or be subjected to frivolous or vexatious defamation lawsuits. When women speak out about sexual and gender-based violence, States should ensure that such speech enjoys special protection, as the restriction of such speech can hinder the eradication of violence against women. States should decriminalise all defamation and insult actions, and enact comprehensive legislation to discourage vexatious or frivolous defamation cases and strategic lawsuits against public participation (SLAPPs) that are intended to intimidate and silence women and drive them out of public participation.

The prohibition against sexual and gender-based violence applies online as well as offline. Online violence against women has particular significance for freedom of expression as it encompasses harmful speech as well as behaviour facilitated by digital technology, including threats of physical or sexual violence, online bullying and stalking, doxing, harassment, targeted electronic surveillance, coercion and non-consensual exposure of intimate images.

Sex and gender should be recognised as protected characteristics for the prohibition of advocacy of hatred that constitutes incitement to discrimination, hostility or violence under Article 20(2) of the ICCPR, and Article 4 of the International Convention on the Elimination of All Forms of Racial Discrimination. Misogyny should be prohibited if it reaches the threshold set by Articles 19(3) and 20(2) of the ICCPR.

States should enact specific legislation or update existing laws to prohibit, investigate and prosecute online sexual and gender-based violence. The legislation should be grounded in international human rights standards on freedom of opinion and expression as well as on gender equality. Law enforcement officials and support services should be trained to recognise and respond to the distinct gendered nature of online violence and the heightened risk of physical violence arising from them.

In consultation with media organisations and representatives of women journalists, States should develop and implement integrated prevention, protection, monitoring and response mechanisms to ensure the safety of women journalists. State officials should publicly condemn any attack on female journalists and should refrain from making statements that could put women at risk.

Social media platforms have an obligation to ensure that online spaces are safe for all women and free from discrimination, violence, hatred and disinformation. Companies should improve their transparency and content governance, provide users with safety tools, make it easier to report online violence and create direct, easily accessible routes for the escalation of complaints. They should ensure that the relevant teams have the necessary expertise on gender-based violence and the cultural context.

Media companies should ensure the safety of female workers by adopting policies and processes to address sexual and gender-based violence and harassment in both the external and internal work environment, involving women in creating these processes and policies, and providing psychosocial and digital security support, legal assistance, and training and protocols for all staff.

Gendered disinformation that does not constitute incitement to violence or hatred should be addressed through non-legal and multi-stakeholder strategies implemented by States, companies and civil society, including public education, community awareness, digital, media and information literacy, de-incentivising the spread of disinformation on social media platforms, fact-checking and fostering of diverse and credible sources of information including independent media, and legal, social and digital safety support to empower and build the resilience of those at risk.

In line with the United Nations Guiding Principles on Business and Human Rights, as a matter of due diligence, all companies should carry out regular human rights and gender impact assessments to identify and mitigate systemic risks to women’s human rights posed by their business model, user engagement practices, advertising, targeting or profiling practices, as well as their content moderation and curation, and data collection and privacy practices.

Internet intermediaries should design processes and outcomes that respect and uphold women’s human rights, using diverse and inclusive teams to create tools, technology and content. They should develop and enable secure digital communications, strong encryption, and anonymity-enhancing tools, products and services. They should empower women with the means to protect their privacy and security, control what data is collected from them and to whom it is distributed as well as what data they choose to receive.

Internet intermediaries should make their policies on non-discrimination, gender equality and safety from online violence publicly available, and explain their practices, decision-making processes, the operation and impact of automated processes and algorithms they use, their appeals processes, and their remedies for abuse, bias or discrimination in non-technical terms and make them easily accessible to all users in local languages.

States should ensure the safety and participation of women in online platforms, including through strong data protection regulations, and regulations to enhance the transparency, due process and human rights due diligence of companies.

Women, in all their diversity and intersectionality, should be included when policies, laws, treaties, community standards, technology and regulations are being discussed, designed and adopted.