Listening to the voices of refugees
21115
post-template-default,single,single-post,postid-21115,single-format-standard,theme-bridge,bridge-core-3.0.1,woocommerce-no-js,qodef-qi--no-touch,qi-addons-for-elementor-1.5.3,qode-page-transition-enabled,ajax_fade,page_not_loaded,,qode-title-hidden,columns-4,qode-child-theme-ver-1.0.0,qode-theme-ver-28.6,qode-theme-bridge,qode_header_in_grid,qode-wpml-enabled,wpb-js-composer js-comp-ver-6.9.0,vc_responsive,elementor-default,elementor-kit-41156

17 Jun 2017 Listening to the voices of refugees 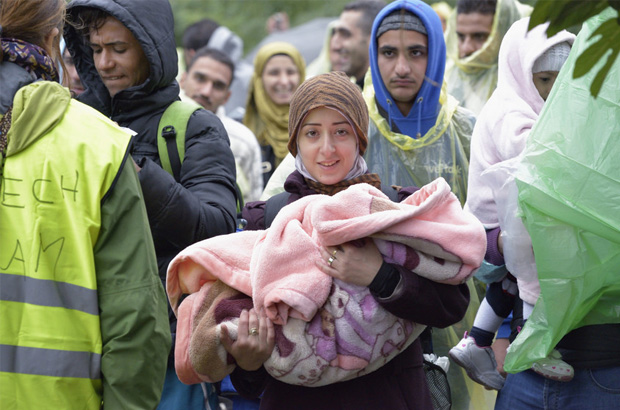 A woman holds a baby in her arms as she approaches the border into Croatia near the Serbian village of Berkasovo. Photo: Paul Jeffrey/ACT Alliance

On World Refugee Day, 20 June 2017, recognizing that the world is still witnessing unprecedented numbers of people fleeing their homes for safety, the World Association for Christian Communication (WACC) renews its call for the communication rights of marginalized and vulnerable people to be respected and realized.

In particular, WACC appeals to media agencies to not only adhere to guidelines on reporting about refugees and migrants but to ensure that the opinions and experiences of refugees themselves be listened to and included in reporting.

“World Refugee Day is a day to celebrate the resilience, the humanity and the courage of those forced to flee their homes and countries,” says Rev. Dr Karin Achtelstetter, WACC General Secretary.

“National and international media have a vital role to play in representing refugees’ voyages and experiences, and proper, respectful and inclusive news coverage can help positively shape public opinion,” she said.

The WACC Europe Region and the Churches’ Commission for Migrants in Europe have initiated a one-year project (www.refugeesreporting.eu) aimed at improving the representation of refugees in the media, by promoting refugees’ communications rights.

A media monitoring exercise is taking place with volunteers in eight European countries objectively assessing the representation of refugees in their respective national media. The results of the exercise, along with thorough consultation of refugee-led organizations and media professionals, will be presented in November 2017.

According to UNHCR, so far in 2017 over 75,000 people have risked their lives to reach Europe by sea, and over 1,800 of them have tragically drowned in the attempt.

“In Europe as elsewhere, we need to challenge public attitudes of intolerance and discrimination against people seeking hope and safety,” says Dr Stephen Brown, President of WACC Europe.

“We believe that the portrayal of refugees and migrants in media has a huge role in their reception or rejection in countries and communities, and there needs to be ways for refugees themselves to speak and articulate their stories and concerns so that our responses are based on facts and needs rather than stereotypes and assumptions,” he added.

Similar media monitoring efforts on migration and refugees are planned by WACC members in Latin America, Africa and Asia in 2018.

WACC members and partners agree that, while the communication rights of migrants, refugees, and displaced persons are often overlooked, access to communication, information and knowledge are crucial aspects of any policy designed to address their needs.

Background information
“Refugees and Communication Rights in Europe” is a project of the World Association for Christian Communication – Europe Region (WACC Europe) and the Churches’ Commission for Migrants in Europe (CCME), supported by Otto per Mille of the Waldensian Church of Italy, along with the Evangelical Church in the Rhineland, World Council of Churches, and Conference of European Churches.