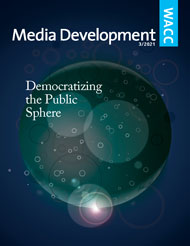 The World Bank notes that the public sphere “is an ideal of good and accountable governance. Its requisites are free flows of information, free expression, and free debate. The ideal public sphere is truly participatory and the best protection against abuse of power.”1

But we do not live in an ideal world. According to Oxfam, the world’s richest 1% have more than twice as much wealth as 6.9 billion people. Almost half of humanity is living on less than $5.50 a day. In 2020, global extreme poverty rose for the first time in over 20 years as the disruptions of the Covid-19 pandemic aggravated the impacts of conflict and climate change. About 120 million additional people are living in poverty because of the pandemic, with the total expected to rise to about 150 million by the end of 2021.

Alongside all this, there is communication and information poverty. Its key manifestations include lack of access to platforms to raise concerns about issues that affect lives and livelihoods; under/misrepresentation in media content; low levels of media literacy; limited access to relevant information, including public information; absence of a free, independent, inclusive, and pluralistic media sector; media concentration in the hands of the powerful; and social and cultural factors that obstruct genuine participation.

It seems obvious that access to affordable communications is an essential condition of social inclusion:

“Media cannot effectively contribute to social progress until opportunities for access and participation in the production and development of media content are more widely shared… Media infrastructure is a common good whose governance and design should be much more open to democratic engagement than currently.”2

Then there is the fundamental question of political will, as evidenced by Pradip N. Thomas in his article “The politics of public space in India” in this issue of Media Development:

“In India, where rampant and rapacious forms of neo-liberalism have defined public space and the terms for public encounters, there has been a steady securitisation of public spaces leading to the creation of walled and privileged publics. In other words – a separation of publics across caste, religion, and class lines. This is a dangerous precedent.”

The ideal public sphere includes but is only partially configured by “public interest media”, based on a form of journalism that brings into the public domain information that the public has a right to know. Often implied in this definition is that but for investigative journalism, undisclosed or censored information affecting the public might remain hidden. The Pentagon Papers (Washington Post and New York Times, 1971), Watergate (Washington Post, 1972), sexual abuse of minors by Catholic clergy (Boston Globe, 2002), NSA surveillance (Washington Post and Guardian, 2013), and the Windrush scandal (Guardian, 2018) are just a few examples. Many more can be found in media outlets in the global South.

Civitates, a philanthropic initiative for democracy and solidarity in Europe, defines independent public interest journalism as, “Journalism that informs the public about what matters to everyone in society, made by actors who are independent of vested (political, corporate or other private) interests, and that is committed to the pursuit of truth, seeking to provide the public with reliable and accurate, balanced and representative information, in accordance with the standards of the profession.”

In terms of their coverage of politics, economics, society, and culture, public interest media may take the shape of a national newspaper or broadcaster. However, there is also a vital role to be played by local media, currently under threat by a concentration of corporate media ownership that threatens news plurality and a diversity of voices and opinions.

The financial viability of local news media has been drastically affected by the ubiquity of digital platforms. With fewer journalists on the ground, some stories are not even being covered. The effect is news deserts (regions without adequate coverage); a scaling back of coverage; forced mergers with other outlets; and loss of advertising income.

The “public sphere” is inevitably fluid and is made up of kaleidoscopic patterns of overlapping influences, pressures, dominant and less dominant voices. It is also subject to technological change, marked most recently by the digital. Some people are already speaking of a “post-public sphere”, with considerable uncertainty about what comes next.

“The idea of a post-public sphere designates the breakdown of an existing model, signalling uncertainty about how long it will take for another ensemble to develop. Of course, we cannot be sure when, or even whether, that will happen. In the context of current instability, however, it is worth recalling that structural change has always driven conceptions of the public sphere. This has resulted in periodic reconstructions of how it works. Its periodic reformulation in the most influential theoretical development of this idea shows how, at any given moment, political, economic and technological conditions define its scope. In short, the post-public sphere is part of a developmental history.”3

It is even more important, therefore, for those most concerned about securing an equitable, accessible, and balanced post-public sphere – whatever form it takes – to be consulted at every opportunity and for human rights and social justice principles to underpin it.

1. See “The Public Sphere” issued by the World Bank’s communication for Governance and Accountability Program (commGAP) and republished in this issue of Media Development.

2. “Why the media is a key dimension of global inequality.” The Conversation. 7 February 2018.