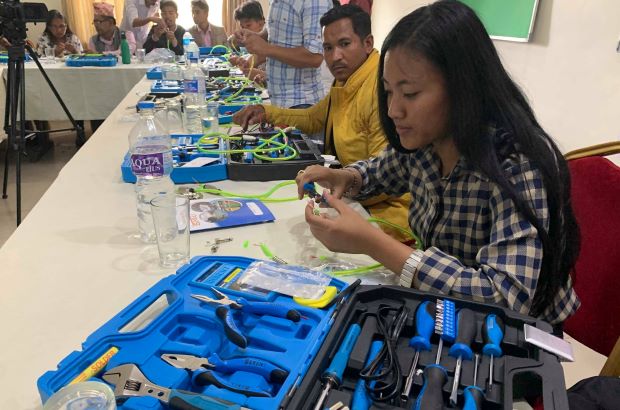 Twenty-four technicians and broadcasters from 21 community radio stations in Nepal are now able to repair and conduct technical maintenance of broadcasting equipment on their own, thanks to a WACC-supported training conducted by its local partner, Indigenous Community Radio Network (ICRN).

ICRN is an umbrella organization of Indigenous community radio stations across Nepal, which aims to enhance the capacity of its members in order to help transform their communities, especially in relation to access to information in Indigenous languages, and freedom of expression. Many of its members have benefitted from WACC funding in the last three years.

During the workshop, ICRN also provided each radio station with a basic toolkit to help them troubleshoot and address technical issues on their own.

“The project is already having an impact,” said ICRN in a report to WACC. So far, “none of the radio stations have had to travel to Kathmandu to have their equipment repaired, which has saved the stations money and time, and has enhanced their sustainability.”

While the ICRN is still a relatively new organization, having been established in 2017, the project has already helped it become “a leading voice in Nepal’s community radio movement,” said Lorenzo Vargas, WACC’s program manager for Communication for Social Change. “Fully understanding that radio is the most powerful form of media among Indigenous people due to its affordability and ubiquity, ICRN also engages in advocacy to advance policy-level change related to access to broadcasting licenses, as well as in work to set standards for member stations.”