Posted at 14:23h in Features by K.R. Sigdel and Dol Raj Kafle 0 Comments 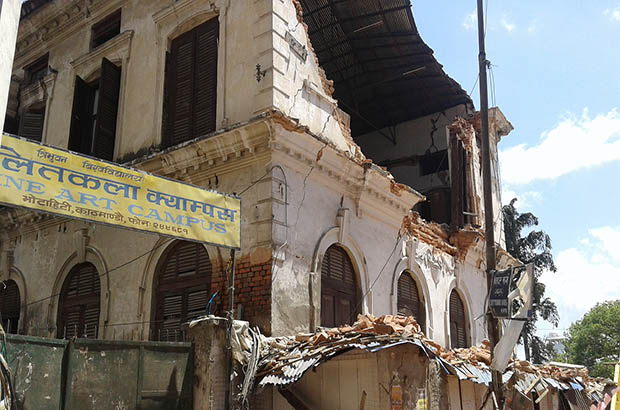 When the 7.8 Richter scale earthquake hit Kathmandu, the only thing everybody wanted to do was communicate.

Everyone who survived the first jolt first wanted to make sure their family members and friends were safe. Others wanted to know the scale of damage to their property, loss of lives and the situation in their community (the toll exceeded 8,000, injured over 17,000, house damaged over 400,000). The government apparatus had to be mobilized and that required communication.

For rescue and relief, reaching out to the affected people was the first priority. However, for obvious reasons, the entire public communication system had almost crashed for hours after the quake. There was no electricity, no wifi and no telephone working for over a week in remote areas. Mobiles, which everyone had, were useless for the first few days.

State-owned Radio Nepal was the only mass media functioning after the earthquake as it had a sturdy building. After few hours, a few stations that had their buildings intact continued to broadcast. Others shut down and many others collapsed during the quake. Television was not accessible to many, as it required power supply and people had to stay inside to watch. Aftershocks kept the people out in the open for almost a week and during that time radio was the main medium.

Radio Nepal, followed by few some other radio stations, soon started broadcasting news which not only included the death toll, injuries and damages but also crucial announcements, notices from the Government’s disaster response authority. Radio became the major means of mass communication, although it was mostly one way. The radio stations faced the challenge of continuing their broadcasts amid fear of aftershocks in order to dispel rumours and help rescue and relief operations.

Radio Nepal did an exemplary job in communicating rescue and relief needs to the Home Ministry from across all affected areas. When the second earthquake shook much of the country, damaging 80% of the houses in Sindhupalchowk (the most affected area), communications became more complicated and difficult, and it deteriorated international aid/rescue works flocked in, just at a time when everyone needed more specific, clear and accurate information.

In the first week after the quake, the priority was to rescue people who were trapped and alive. However, as there was no emergency means of communication, the rescue operations faced challenges. Many lives would have been saved had there been any emergency means of contract for the people to call the rescue team and a system of prompt response.

People in remote areas were completely cut off. It was impossible to travel, which had come to a standstill because of landslides and fear of more to come. Even if some managed to communicate to the rescue team, it was too big a task for a small team to handle. It would take months if other international rescue teams had not arrived. 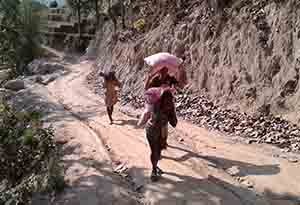 Local people and organizations, including the international organizations, started distributing immediate relief, mostly food and tents to the people. However, relief mainly went to people who were close by and were accessible by road. Those in remote areas and in places where there was no road or it was damaged could not receive anything.

While it was realized by the Nepal Risk Reduction Consortium (NRRC) that “communication on disaster risk reduction should be harmonized to avoid mixed messages to the public, avoid confusion, and maximize impact”, it was far from being implemented due to a lack of any such agreed upon communication strategy or awareness of same.

Secondly, due to lack of communication, those who wanted to distribute relief could not receive information on what kind of relief the people needed. That resulted in distribution of excess or unnecessary materials in some areas and nothing in other areas in the first week: causing angry protests, looting and violence.

“Media shape our perception of risk and that the risks that kills us are not necessary the risks that scare us the most,” Dr. Orlando Mercado, an international expert on communicating disaster risks, once said while in Kathmandu in 2013. Indeed, dispelling rumours and making the mass media communicate the right message was another challenging task after the earthquake.

There was false news about “scientists forecasting 9 or 11 Richter scale quake” and “rotten human corpses under the debris”, of food and water shortages in the Kathmandu valley, and of cholera that terrified already scared people of spreading infectious disease and more serious disaster. Similar sensational news helped worsen the situation and forced over 1 million terrified people out of Kathmandu in very few days.

The scale of people’s frustration was huge after the disaster as the public did not feel the presence of their government. There was no one to talk to from government in villages or in cities. There was no place to lodge complaints. In some places it has been many years since local elections have happened and this means there are no people’s representatives in the local bodies, like villages and wards.

It was very challenging for the government to reach out to the people in a systematic way. A simple emergency inquiry system would have made things easier for people. The only public line some people were aware of was 100 – the police. Not many were aware of emergency contacts. In every corner, you would find people criticizing the government and the political party representatives for failing to do anything to help them during the disaster.

The government, however, took some immediate damage control measures to quell public anger. Prime Minster Sushil Koirala decided to address the nation three days after the first quake. With the announcement of relief packages, the address would certainly have reassured earthquake survivors.

Resource mobilization was probably the sector most affected by lack of proper and systematic communication. As foreign donations started pouring in after the quake, local NGOs rushed to the villages with relief. Many organizations and groups started their own fundraising campaigns nationally and internationally. An unaccounted amount of money was wired through money transfers.

The Prime Minster’s office soon jumped in, set up a PM Relief Fund and declared that it would pool all the money collected at all the accounts set up by fundraisers. After news that the NGOs relief work was not transparent and not monitored, the government made another announcement that NGOs could distribute relief only through government channels. This triggered huge uproar and confusion and the government adjusted its decision after incurring criticism.1

Between these two decisions, there was a lot of confusion and lack of systematic communication. It was all ad-hoc — an official of the National Planning Commission (which was coordinating resource mobilization) twitted and posted in Facebook that, “I have been swamped with enquiries on what the recent Central Bank directive transfer of funds after the April 25 earthquake means.” He took pains to explain the confusion with a long explanatory note.

After the NGOs criticism, the government rolled back its restriction on direct distribution relief. This is clearly a challenge for Nepal to find out what kind of communication system caused these decisions and confusions.

Perhaps there is no debate that Facebook and other social media helped people connect and communicate on an unprecedented scale. If not immediately after the earthquake, during the very first week itself, Facebook had become the only major hub for communication among local people. It allowed people to share their thoughts and feelings and other information. Words of prayer, love and support poured in from all across the social circle, including from friends and families living outside the country.

The warm words helped people heal their trauma and keep them controlled in the face of the tragedy. Facebook Inc. and Mark Zuckerberg himself took the initiative to connect people and started the “Mark Safe” project for all Facebook account holders in Nepal, which was an innovation and helped millions of people to communicate their needs.

Radio stations turned out to be very helpful in making communication possible during the disaster. This experience made everyone realize the importance of taking extra care in setting up public buildings, including communication hubs like radio stations. It also prompts us to think about disaster preparedness plans for mass media.

International humanitarian organizations played an exemplary role in addressing some of the major communications challenges during Nepal’s earthquake. The UN OCHA took charge of coordinating all international organizations and their responses with local authorities and the people by setting up different coordination hubs at different levels. Regular situation updates were helpful in coordinating relief work.

While it will take a long time for Nepal to return to normalcy, this disaster has certainly exposed how vulnerable, weak and unprepared we are to disaster risks. In terms of communication, it was equally clear that Nepal needed to do more to ensure that in future disasters, we do not repeat the mistakes that happened in the aftermath of the April 25 earthquake.

When it comes to broader communications and coordination, the government’s disaster response authority needs to have a clear communications strategy and guidelines in place so that there is no confusion about key messages on resource mobilization, rescue or relief work.

K.R. Sigdel is a WACC personal member and former project partner working on issues of peace and security in Nepal. For further information, the authors may be contacted here.

Note: In times of crisis, accurate information is as essential as it is elusive. It was thus quite unfortunate when rumours around the Prime Minister’s relief fund started to spin out of control. Rules placed by the government around the influx of funds to non-registered NGOs or personal accounts were misinterpreted by both international news media and on social media.