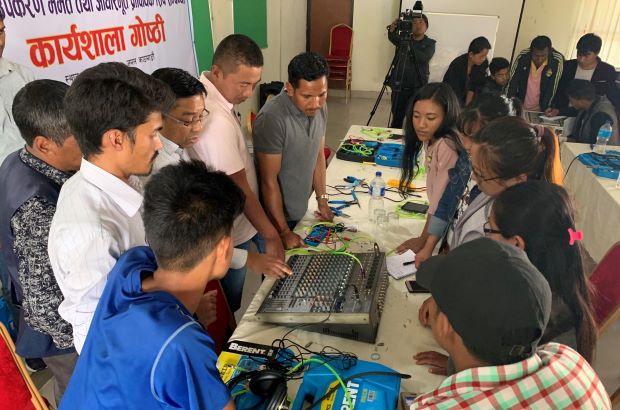 The workshop, held June 3-5 in the capital Kathmandu, was aimed at fixing common radio problems that arise, especially during the rainy season. Heavy rains often disrupt radio operations and make it difficult to bring equipment for repair from remote villages to the city.
The radio technicians – representing 21 Indigenous community radios – said it was their first time to attend such a workshop, the ICRN said in its report to WACC.  They also said further training was needed. WACC supported the project, along with the American NGO, Cultural Survival.

The workshop included training on how to open transmitter gates and change a fuse, and  techniques for disconnecting a transmitter to protect it from lightning, and for preventing and removing viruses from computers. Technicians received practical training in installing antenna, transmitter, mixture, computer, and wires and connectors. They were offered tips on how to identify problems and fix them right away.

They were also provided with a radio repair toolbox that included an adjustable wrench, hand saw, hand drills, among other things.

“WACC is very happy to partner with ICRN on this project,” said Lorenzo Vargas, program manager for Communication for Social Change. “We believe that supporting networks of community media outlets – rather than supporting individual community radio stations – is critical to enhancing the long-term sustainability of the community media sector as a whole.” He added that ICRN fills “an important void in Nepal’s Indigenous media ecosystem, in terms of sector-wide advocacy, mobilizing expertise across the network, and identifying best practices.”

Photo above: Nepalese radio technicians learn techniques for disconnecting a transmitter to protect it
from lightning, and for preventing and removing viruses from computers, among other things, during a workshop organized by Indigenous Community Radio Network (ICRN), a WACC partner. Courtesy of ICRN