On the Screen MD 2022/2
44719
post-template-default,single,single-post,postid-44719,single-format-standard,theme-bridge,bridge-core-3.0.1,woocommerce-no-js,qodef-qi--no-touch,qi-addons-for-elementor-1.5.4,qode-page-transition-enabled,ajax_fade,page_not_loaded,,qode-title-hidden,columns-4,qode-child-theme-ver-1.0.0,qode-theme-ver-28.6,qode-theme-bridge,qode_header_in_grid,qode-wpml-enabled,wpb-js-composer js-comp-ver-6.9.0,vc_responsive,elementor-default,elementor-kit-41156

A the 70th International Film Festival Mannheim-Heidelberg (November 11-21, 2021), the Ecumenical Jury, appointed by INTERFILM and SIGNIS, awarded its Prize of EUR 2.500 donated by the German Bishops‘ Conference (DBK) and the Evangelical Church in Germany (EKD), to the film Ma nuit (My Night) directed by Antoinette Boulat (France, Belgium, 2021).

Motivation: The affirmation of one’s own life begins with saying no to the most diverse offers of externally determined life. The path that the protagonist Marion takes on the birthday of her sister Alice, who died five years ago, leads right into the dark. It is the darkness of her own grief that challenges her to take a different look at life, a look that does not allow itself any distraction from the seductive illusions of, for example, a casting offer or her peer group.

The breakthrough to a new beginning, however, also requires a leap of faith – in this case towards a coincidental companion who shows himself to be a soulmate. At the same time, this means allowing closeness and taking the risk of life.

All of this breaks through in a leap into the Seine, which seems like an intimate baptismal experience that allows lightness and makes room for new beginnings. From the acceptance of one’s own vulnerability, she finally reaches for the blue of the sky, thus transcending the boundaries of transience and overcoming grief.
Antoinette Boulat has succeeded in creating a magical cinematic moment with My Night, magnificently performed by an outstanding Lou Lampros.
The members of the 2021 Jury: Michael Kranzusch, Jury President, Germany; Uta Losem, Germany; Lothar Strüber, Germany

At the 43rd Film Festival Max Ophuels Prize Saarbruecken January 16-26, 2022 the Prize of the Ecumenical Jury, endowed with € 2500 by the Katholische Erwachsenenbildung Saarland-Landesarbeitsgemeinschaft e.V. and the Landesarbeitsgemeinschaft für Evangelische Erwachsenenbildung im Saarland e.V., represented by the Evangelische Akademie im Saarland., was awarded to Moneyboys directed by C. B. Yi (Austria, France, Belgium, Taiwan, 2022).

Motivation: The film is captivating with its chronological narrative and dramatisation of the contrasts between a traditional “rural idyll” and an anonymous big city. The rhythm and bustle of the city is counteracted by the supposedly quiet and harmonious home village. The longing for the comfort and safety the protagonist feels amongst his family, ends in a violent reproach of blame that forces him to go back to the anonymity of the city. The deliberate use of colour, music and visual aesthetics powerfully underlines the dynamics behind using your own body to make money fast whilst on a precarious path to the Chinese upper class. 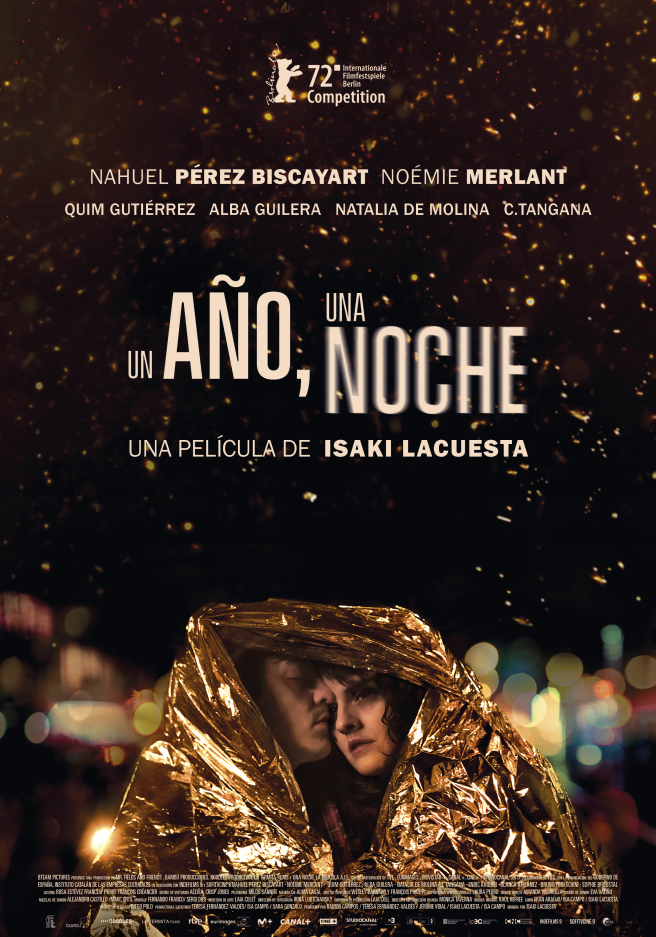 At the 72nd International Film Festival Berlin held February 10-20, 2022, the Ecumenical Jury, appointed by INTERFILM and SIGNIS, awarded its Prize in the International Competition to Un año, una noche (One Year, One Night) directed by Isaki Lacuesta (Spain, France, 2021).

Motivation: The film broaches the issue of the psychological and social effects of the terrorist attack against the discotheque Bataclan/Paris 2015. In its balance between the way of representing human destiny and outstanding artistic intensity in all dimensions of film language and acting, the film represents the long grief process of a young couple, Celine and Ramon, after the attack.

The struggle of the main character dealing with Death (“He is not the God of the dead, but of the living”, Mark 12,27) is so intimate and intense that months are needed to accept the reality. From the beginning, Violence is not responded to by hate but by love (Matthew 5,44f). After months of loneliness, relations full of life are again possible.

In the Panorama, the Jury awarded its Prize, endowed with € 2.500 by the Catholic German Bishops’ Conference, to Klondike directed by Maryna Er Gorbach (Ukraine, Turkey, 2022).

Motivation: The film is set during 2014 at the Russian-Ukrainian border. The film begins when a bomb hits the wall of Irka’s and Tolik’s house. The destroyed wall opens the view onto the surrounding landscape. The village becomes a theatre of war, and Irka and Tolik become witnesses of the passenger plane MH17 that was shot down. The Russian-Ukrainian conflict runs through the family since Irka’s brother suspects Tolik of being a Russian separatist. The pregnant Irka refuses to flee while Tolik does everything to protect his wife and the unborn child.

Klondike shows impressively how private happiness is pulled out of joint through war and violence. The film’s staging is outstanding: It concentrates entirely on the characters whose room to manoeuvre is more and more minimized by the conflict. The characters act like on a stage. Thereby the film directs our gaze to the existential question of what is more important: to bring yourself to safety or to hold on to your home, and where you find the prospect of a new life.

In the Forum, the Jury awarded its Prize, endowed with € 2.500 by the Evangelical Church in Germany (EKD), to Geographies of Solitude directed by Jacquelyn Mills (Canada, 2022) for documenting the work of Zoe Lucas, who committed her life to collecting and archiving flora and fauna on Sable Island, a tiny place far off the coast of Nova Scotia.
With remarkable filmic means, immerging into the fibre of biological existence, creating images and sound of tremendous beauty, Mills shows nature on this secluded island as a space of great quiet and of the continuous recreation of life. The discovery that Lucas documents the large amounts of plastic waste in the North Atlantic comes as a shock to the filmmaker and the audience, thus also raising awareness of this dramatic ecological problem.