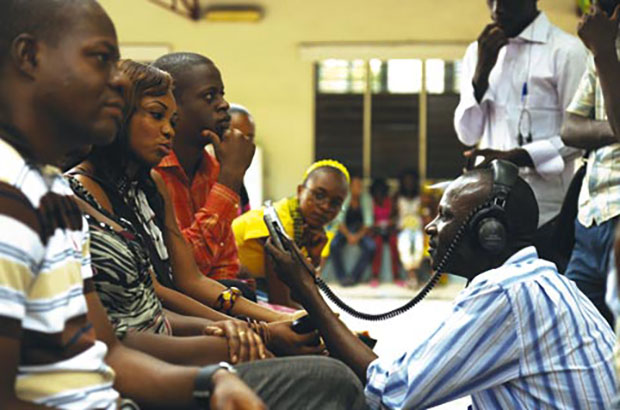 In 2002, Radio Okapi became the first station in the Democratic Republic of the Congo (DRC) to broadcast across both government and rebel-held territory. Fourteen years later, its director reflected on how the station has contributed to peace-building and reconciliation, in an article written by Caro Rolando and published by IFEX, the Toronto-based organization that supports free expression.

Radio Okapi was created by the U.N. Organization Mission in the DRC and the Swiss NGO Fondation Hirondelle. U.N. Chief of Information at the DRC mission David Smith noted at the time that there was no single voice that united all the Congolese people. “This radio project will allow people in rebel held territories to speak to people in government-controlled territories for the first time since the war broke out,” he told Radio Netherlands.

Radio Okapi was created in the final years of the DRC’s bloody, internal conflict that some have described as “Africa’s first world war,” wrote Rolando in the IFEX article.

It was formed with an aim to “convince people that it’s in their interest to lay down their arms,” and now has grown to the point where it has approximately 25 million listeners, and employs 191 people, according to Amadou Ba, its director.

Free expression and access to information are still issues in the DRC, ranked 152nd out of 180 countries in Reporters Without Borders’ 2016 World Press Freedom Index. Radio Okapi is working to change things. It is the first station to broadcast across government and rebel-held territory on shortwave and FM. It also broadcasts in the five major languages of the region (French, Lingala, Swahili, Tshiluba and Kikongo).

With the war officially over, Ba responded to questions IFEX had about the station’s role in Congolese society and its plans for the future.

Q – What role does the radio play in keeping people in the DRC informed of news and political developments?

A – Radio Okapi plays an important role in the processing and flow of information to the population. At the same time, it has become the main source, and acts as a press agency by supplying to newspapers and even other radio stations in the Congolese media landscape. Its website has only gained momentum with over two and a half million visitors per month. Its Facebook page has over half a million friends. Radio Okapi is a way for citizens to access facts, data, ideas and thoughts necessary to exercise their free will. Radio Okapi remains the only medium that allows the vast majority of the population to speak on the big and small events in the local and national life of the country.

Q – What distinguishes Radio Okapi from other stations in DRC?

A – Radio Okapi is aware of the role it plays in the Congolese people’s national reconciliation process. It is a major force for dialogue throughout the Republic, and supports the people’s efforts to promote the rule of law, and the economic, social, and cultural development of the DRC.

A second defining feature is that Radio Okapi consistently demonstrates high professionalism by seeking information straight from its source. It strives for a more rigorous approach to how information is handled and how contributors are chosen.

Radio Okapi upsets the established order. It gives a voice to everyone, from a government spokesperson to a peasant in the most remote corner of the country. It gives citizens the opportunity to not only make their needs and their views known, but also gives them a forum for disseminating constructive ideas.

To read the rest of the interview, click here.