Posted at 12:23h in One Year Projects by wacc_kn 0 Comments 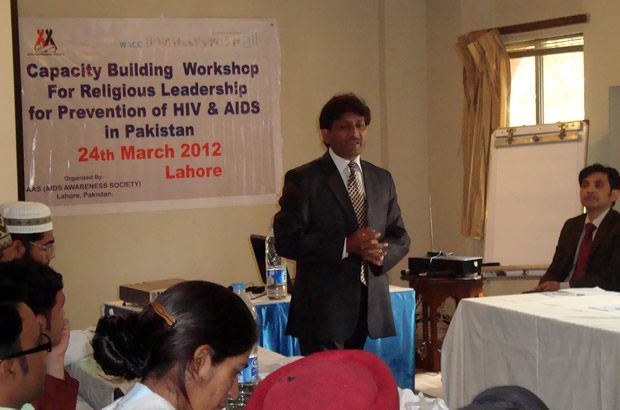 The project purpose was to mobilize Christian, Muslim, Hindu and Sikh faith communities to reduce stigma and discrimination attached of HIV & AIDS. The project was initiated by the AIDS Awareness Society (AAS), a local civil society organisation established in 1993. AAS works with HIV+ persons, female and male sex workers, transgender persons, street youth and religious leaders, among others, to increase knowledge about HIV and AIDS and to advocate for the rights of most at risk populations and HIV+ persons.

Assessment: The project objectives were successfully met. 62 Religious leaders were trained on the prevention of HIV & AIDS. 33 students from 10 religious institutions of Christianity, Islam, Sikh and Hinduism are trained as Master Trainers, to transfer HIV & Prevention knowledge to their students.10 Members of AAN Street theatre trained for 32 street theatre performances on effects of HIV & AIDS stigma and discrimination. 285 students of religious institutions participated in the poster competition; the Muslim religious institutions however did not participate due to their religious understandings on sketch making. One setback to the project was presented by the blasphemy incidents and blasphemous cartoons by European media, causing the Muslim leadership to restrain from undertaking project activities in their religious institutions. Overall, good linkages were developed among the four religions, and an atmosphere of interfaith harmony was created. A referral programme was developed in which religious leaders cooperate with Government and Non Government HIV & AIDS diagnosis, information and treatment centres in Lahore such as VCCT Centres, Treatment Centres, PPTCT Centres. 75 men and 35 women benefitted directly through involvement in training and project activities. Women comprised 51% of the 38,600 indirect beneficiaries.