Researchers focus on gender equality in the media
20697
post-template-default,single,single-post,postid-20697,single-format-standard,theme-bridge,bridge-core-3.0.1,woocommerce-no-js,qodef-qi--no-touch,qi-addons-for-elementor-1.5.1,qode-page-transition-enabled,ajax_fade,page_not_loaded,,qode-title-hidden,columns-4,qode-child-theme-ver-1.0.0,qode-theme-ver-28.6,qode-theme-bridge,qode_header_in_grid,qode-wpml-enabled,wpb-js-composer js-comp-ver-6.8.0,vc_responsive,elementor-default,elementor-kit-41156

13 Jul 2015 Researchers focus on gender equality in the media 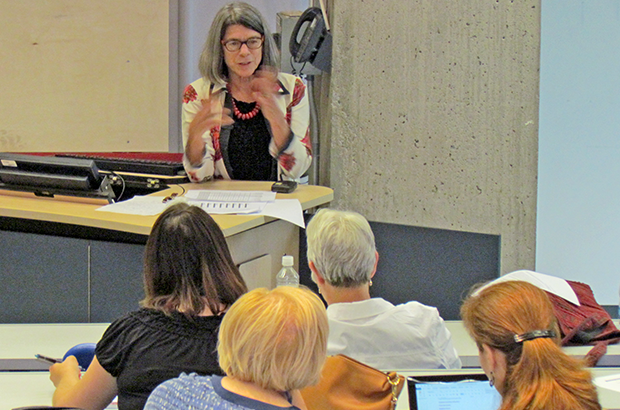 A special session on the future research agenda of the Global Alliance on Media and Gender (GAMAG) took place in Montreal on 13 July 2015.

WACC is represented on the Steering Committee of GAMAG. The event figured on the conference program of the International Association for Media and Communication Research (IAMCR) running 12-16 July.

A key question is whether any program of gender mainstreaming aimed at encouraging good governance really promotes or enhances gender equality as put forward in the Sustainable Development Goals (SDGs).

Lisa McLaughlin of Miami University, USA, stressed that, “Governance encompasses regulation and policy, but it is a broader notion than government and more about interactions among formal government institutions and institutions of civil society and the private/corporate sector.”

Claudia Padovani, University of Padova, Italy, urged participants to identify those spaces for intervention that make gender equality in and through media much more visible.

She called for more clarity of the core concepts of media and gender, a sound theoretical understanding of what gendering global communication policy would mean, and analytical frameworks that allow groups empirically to address the possibility for policy change over time.

Karen Ross, Northumbria University, United Kingdom, referring to the many commitments to gender equality made over past decades, deplored the lack of concrete actions.

Lavinia Mohr, WACC Deputy General Secretary, identified as future areas of research the possibility of thematic monitoring of gender-related issues in the news media and making a comparative study of the top countries in each region to discover what has worked in relation to policy and practice.

Summing up, Indrajit Banerjee, UNESCO’s Director of the Building Knowledge Societies Division, said that UNESCO is proud to support and endorse the GAMAG initiative and to help take it to the next level of action.

He invited participants to devise a plan of action and concrete recommendations that he could present to UNESCO.

The IAMCR conference is taking place at the Université du Québec à Montréal (UQAM), a French-language public institution of international repute. It is the first time IAMCR members have met in North America.

The conference theme – “Hegemony or Resistance? On the Ambiguous Power of Communication” – explores the tensions between communication as an ideal for social transparency and communality, but also as a threat in terms of global domination.

The conference consists of keynote presentations, empirical research from a wide variety of contexts, as well as methodological and theoretical papers presented and discussed in open sessions.

WACC has been represented in IAMCR for over three decades and values its ongoing relationship with this worldwide network of communication researchers and practitioners.