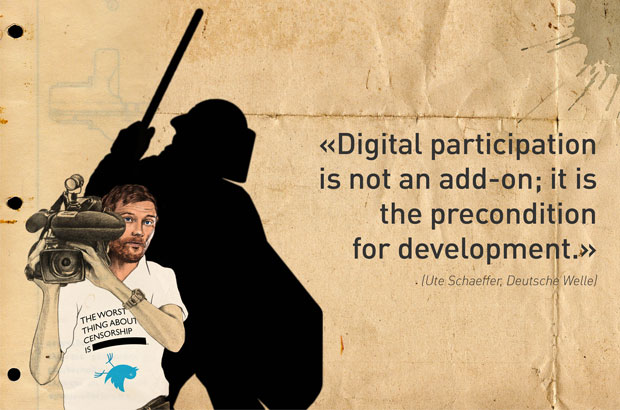 At the end of 2018, an astonishing statistic was published by CIVICUS Monitor, a research collaborative effort that rates and tracks respect for fundamental freedoms in 196 countries.

CIVICUS is a global alliance made up of an influential network of civil society organisations at the local, national, regional and international levels, and spanning the spectrum of civil society.

The report “People Power Under Attack 2018” shows that nearly six in 10 countries are seriously restricting people’s fundamental freedoms of association, peaceful assembly, and expression. It is evidence of the ongoing crisis facing civil society organisations and activists throughout the world, with the space for civic activism most commonly undermined through censorship, attacks on journalists, and harassment of human rights defenders.

Cathal Gilbert, Civic Space Research Lead at CIVICUS, says, “For civil society, 2018 was a story of states innovating to suppress and restrict criticism by those who dare to challenge people in power.” Just 4% of the world’s population now live in countries where governments are properly respecting the freedoms of association, peaceful assembly, and expression.

Shrinking civil society spaces has become a topic of intense debate, increasingly flagged by activists, academics, and rights advocates who discuss its causes and impacts. It is a global phenomenon, whose signs include restrictions on foreign funding, barriers to registration, arbitrary detentions, and smear campaigns against NGOs. In response, funders and rights organizations are exploring alternative strategies.

Many such are directly related directly to communication rights, increasing public awareness, as well as key issues of accessibility and affordability. They include tapping into counter narratives that can mobilize public opinion; addressing the root causes of a crackdown; using information and communications technology to increase visibility of the phenomenon; establishing platforms to exchange ways in which the phenomenon is manifesting itself globally; and radically reimagining the way networks and coalitions operate.

Writing on closing civic space in his blog “From Poverty to Power”, economist Duncan Green lists the conditions under which civil society contributes to inclusive development: “These are present when actors have the capacity to represent the concerns of the marginalised and disempowered, with both the space to articulate those concerns independently, and the traction with political elites to elicit a policy response through meaningful engagement.”

In other words, the communication rights of civil society organisations need to be recognized, upheld, and strengthened. The question is how?

Image above by  Heinrich-Böll Foundation, Germany