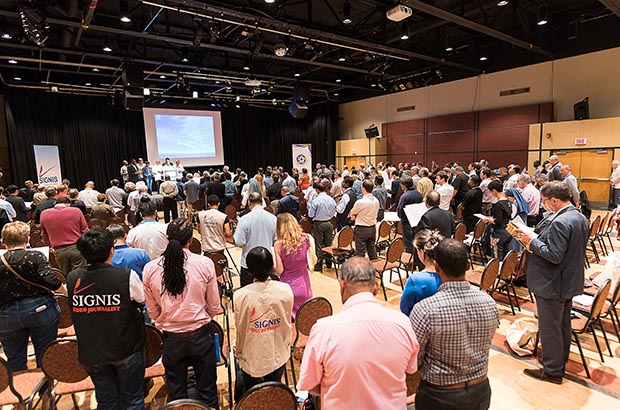 Quebec City, Canada, was the venue for the SIGNIS World Congress, which took place 19-22 June 2017.

WACC is a long-time partner of SIGNIS – the World Catholic Association for Communication – which is celebrating 90 years of endeavours in the field of social communications, peace-building, and cinema.

WACC and SIGNIS make an annual Human Rights Award for a documentary film and, together with the Protestant film organisation INTERFILM, the three organisations support the presence of Ecumenical Juries at the world’s leading film festivals.

Framed around the theme “Media for a Culture of Peace: Promoting Stories of Hope”, the SIGNIS Congress began with an inspiring plenary focus on “Communicating hope”. Some 150 participants heard Professor David Mulroney, President and Vice-Chancellor of the University of St Michael’s College, Toronto, speak about linking the religious and the secular in higher education.

Sr Norma Pimentel gave a moving presentation on the plight of child refugees on the US-Mexican border and the need to bring about a more compassionate response. It was followed by breakout sessions exploring “Storytelling on the Screen”, “The Medium is the Marketing”, and “Emerging Spirituality and Religion”.

A second presentation titled “Hope in the Future” was made by cinematographer Rock Demers, focusing on how modern-day fairy-tales can encapsulate children’s hopes and fears. The ensuing discussion was moderated by Mediafilm editor-in-chief Martin Bilodeau. Breakout sessions then explored “Music and Hope”, “Communicating Faith and Hope”, “Faith, Formation, Digital Storytelling and Social Media”, and “Campaigning for Change: Collaborating across the Media”.

A highlight of the day was a presentation by Msgr. Lucio Adrian Ruiz, Secretary of the Vatican’s new Secretariat for Communication. He unveiled detailed plans for a multimedia digital platform that responds to technological convergence and merges the Vatican’s separate media units into a new organisational structure.

The second day saw a similar panorama of plenary sessions discussing “Building Peace and Hope in a world of Cultural and Religious Diversity” and “The New Generation of Catholic Communicators” followed by workshops and study sessions. 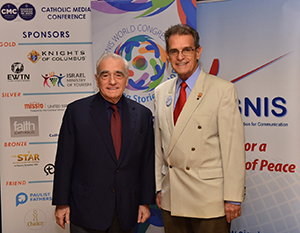 On the third day, SIGNIS members joined the Catholic Press Association for joint meetings, which included a screening of Martin Scorsese’s most recent film Silence. Set in 17th century Japan, Silence follows two Portuguese Jesuit priests as they attempt to locate their mentor, who is rumoured to have renounced his vocation as a priest. (Martin Scorsese is pictured here with outgoing SIGNIS president Gustavo Andújar. Photo:  Samuel Tessier).

The film is based on the book of the same name by Japanese author Shusaku Endo, who wrote from the perspective of a Japanese Roman Catholic. The film was 25 years in the making. Critical reaction has been mixed, some finding the film beautiful to watch and spiritually uplifting, others overlong and ambiguous.

A packed auditorium heard Martin Scorsese speak about his adolescence and the background to the making of the film. At a celebratory banquet the film director received a public tribute to his decades-long work in cinema.

A SIGNIS Life Time Achievement award was given to John Pungente, SJ, a pioneer of media education, who created an award winning television series to help in the teaching of contemporary TV and movies. He influenced and still influences a large number of media educators in the world of faith-based communications.

At the end of the World Congress, SIGNIS held its assembly of 44 delegates from five continents. Helen Osman, USA, was elected as the new President of SIGNIS. She will be assisted by Lawrence John Sinniah (Malaysia) and Paul Samasumo (Zambia), as vice-presidents. Ricardo Yáñez was elected General Secretary and Emmanuel Bonnet (France) as the new Treasurer.

Gustavo Andújar, outgoing SIGNIS president, remarked, “The Congress has marked a propitious moment for SIGNIS to trace its course towards the future, in continuity with a long and rich history of almost 90 years of service, but also with imagination and inventiveness.”