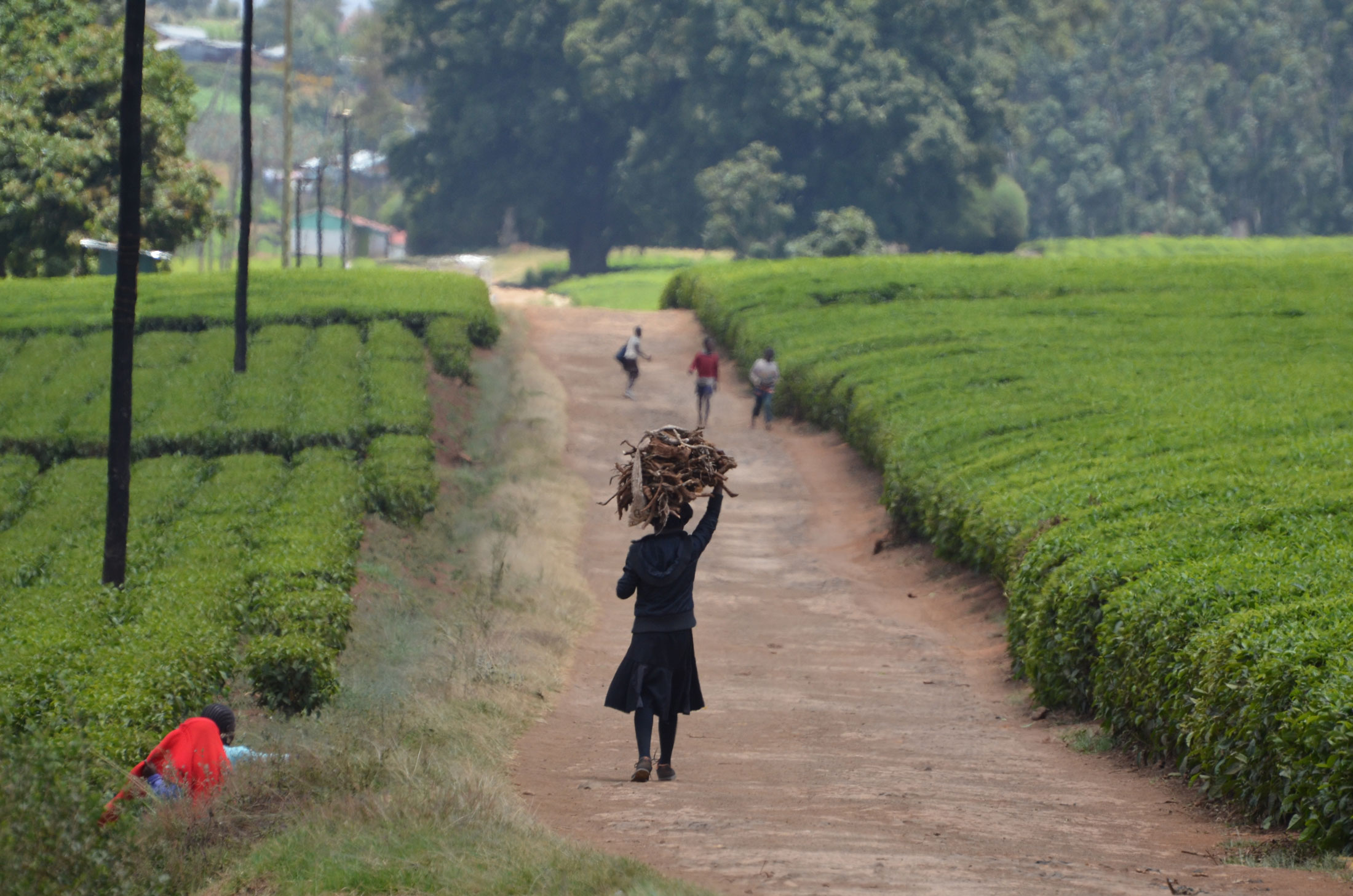 The following article describes how previously voiceless people in a small region of Kenya were given a chance to communicate to decision makers, the young generation, their peers and the general public. The topic? What climate change means to them and how everyone can contribute to making the world a better place.

“As a young girl, I accompanied my mother to the forest to collect firewood. We always carried blunt machetes as a rule. The reason was to ensure we only collected dead or dried wood.” says Zipporah Matumbi. This was during an interview conducted by Kelvin Thuranira, a young citizen journalist working on a story about traditional ecological knowledge and climate change mitigation and adaptation.

Zipporah is a 76-year-old woman living in Meru County, Kenya and who is a smallholder farmer living adjacent to the Mt Kenya Forest. Kelvin is one of 20 youth trained on Environment and climate change and on basic communication and journalism skills by The Farm Forestry Smallholder Producers Association of Kenya (FF-SPAK). The training was part of a larger project that sought to use communication as a means of promoting new thinking and action on climate change. The 1-year project was implemented by FF-SPAK. It had three targeted outcomes which were:

Increased awareness about the role of smallholder farm forestry including women and youth inclusion in addressing climate change.

Influence of policy on support to smallholder producers to address climate Change among governments, donors and other stakeholders.

The Earth, the only place we humans and other living things call home is faced with many threats. In recent times, one particular threat has proven to be most critical. Climate change is becoming more and more real every day. It is affecting nations, communities and people in many different ways.

For instance, smallholder farmers in Kenya are struggling with changing weather. Prolonged and harsher dry seasons alternating with periods of too much rain are literally ruining their livelihoods. They can no longer plant their crops and be assured of a decent harvest to take care of their families. This situation and that faced by others the world over calls for concerted action.

While there are commendable efforts to check climate change by the United Nations, nation states, multinational, regional and national organizations as well as communities, there is a need to include all voices and hands not only in the discourse but also in actions in ways that people understand best.

In a recent interesting experience, the use of traditional ecological knowledge and communication demonstrated that a community of smallholder farmers can not only take charge of their destiny as far as climate change is concerned but also influence many others to follow suit.

FF-SPAK was privileged to implement the “Promoting Traditional Climate Change Mitigation Methods through the Media” project in one of the areas feeling the effects of climate change in Kenya. The project, which ran from January 2020 to January 2021 adopted a unique approach of addressing climate change issues through communication. It helped give hitherto voiceless people a chance to communicate what the climate crisis means to them and how each party can contribute to positive change even if it is only in a small way.

The project started by conducting a study on the use of traditional ecological knowledge to combat climate change among the Ameru people. It was quickly confirmed that climate science and traditional knowledge are both critically significant when designing climate adaptation strategies which enhance the resilience of rural communities to deal with climate change impacts.

Indigenous local communities are richly endowed with traditional knowledge which they have utilized over hundreds or even thousands of years to endure and adapt to numerous climate related disasters. The knowledge is complexly linked to conservation and biodiversity utilization. If this knowledge were to be incorporated and mainstreamed directly into the existing climate change adaptation and mitigation processes, it would provide an exceptional platform to combat and mitigate the adverse impacts of climate change.

However, the problem with both knowledge systems (scientific and traditional) is the manner in which they should be utilized in the decision-making process and how to use them in synergy to guarantee a robust, shared adaptation approach.

The second step was to identify and train citizen journalists that can collect and publish stories about everyday people and their struggle with the changing climate. Twenty people mostly youth drawn from the community were selected for this. They came from the local FF-SPAK chapter and understood the region and spoke the local language as well.

The 20 were trained on climate change and basic journalism. They became citizen journalists that would go out into the community and conduct interviews with selected senior citizens that had lived in the area and experienced the trends and effects of climate change firsthand. The citizen journalists then developed stories in the form of video clips, radio clips or written stories. These were then shared on different platforms including social media sites like Facebook, twitter, WhatsApp.

Some of the journalists managed to get their articles/clips published on mainstream media platforms including local and national television and radio stations. This created a lot of interest from diverse groups including local government officials, different development programmes, organizations, government agencies and the general public.

More than 80 videos, articles, and audio clips were published or posted in mainstream media and social media respectively. The effect of this was profound. The project worked with four radio stations, three television stations, five print media and a wide range of social media channels/accounts.

These local and national media stations helped reach more than 100,000 people throughout Kenya with thought-provoking stories about climate change and the role that traditional ecological knowledge can play. Community and public attention was provoked partly by the fact that these were real stories from peers and people they could relate to and further by the fact that they themselves were affected by climate change. Indeed, these stories generated significant discourse on various platforms.

One lesson learnt from the project was there is a need to integrate traditional with modern knowledge and approaches to ensure we get the most out of our efforts to address climate change. As the FAO notes:

“Documented experiences and lessons in the field indicate that community-based adaptation (CBA) yields far more encouraging results than any other approaches. CBA to climate change involves multistakeholder action, innovation and social learning. Usually, it involves small-scale, low-cost and simple technologies made possible by whatever resources local communities have. People empowerment, both as a means and as an end, is at the heart of CBA. It emphasizes the need to build local capacity and begins with the identification of adaptation practices by the affected communities themselves. This is done through the use of participatory learning methodologies that link sound local knowledge with scientific knowledge, as well as with rural services.”1

Among the Ameru people there were various sayings and beliefs that helped protect forests and the environment. Furthermore, there were strategies employed particularly to ensure survival during bouts of prolonged dry seasons; Some of those listed during the project were:

During project implementation, the team was confident that the stories coming from the community were interesting and important enough to warrant free or low-cost coverage from mainstream media houses. However, this proved a bit difficult because most mainstream media were essentially profit-making companies and had standard fees for running feature stories or documentaries. Luckily, social media proved very powerful for getting these stories out.

In fact, it was after noticing the interest from the public generated by the social media sites that many of the mainstream media houses decided to cover the project activities as news stories. Another challenge experienced during the life of the project was the restrictions and protocols occasioned by the Covid-19 pandemic.

The pandemic spread across the world just at the time when implementation was due to start. However, using a variety of approaches like having online meetings/trainings, use of local experts and working closely with local authorities while strictly following set protocols allowed the project to continue.

To wrap up the project, a stakeholder workshop was organized that brought together players from different interest groups. It included representation from the community, government agencies, non-governmental organizations and the youth who had been trained and worked as citizen journalists for the project.

Many of the stakeholders in the workshop were either currently involved or had in the past been involved in some form of climate change programme. They all agreed that the communication angle could bring out better results if deployed effectively.

Participants agreed that the population most vulnerable to climate change is those with limited adaptive capacity. The conclusion, therefore, was that their stories and voices needed to be heard. This would allow for better planning and acceptance of climate change interventions whether they are to do with mitigation or adaptation.

Edwin Kamau is from Kenya and works with the Farm Forestry Smallholder Producers Association of Kenya as a programme coordinator. He is a project management specialist but also an environmentalist as well as a community development practitioner.