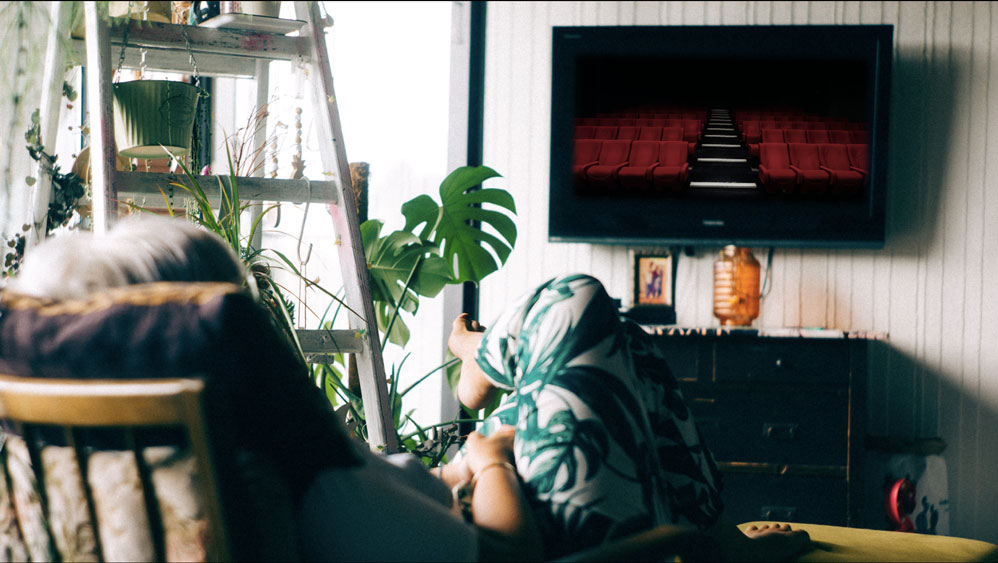 2020 has been a year of apocalyptic revelations in the U.S., uncovering national failings and imaginative alternatives amidst turbulent times. An inadequate national response to a global pandemic, raging environmental disasters, a chaotic presidential election, and an ongoing reckoning for racial inequity and police violence.

Most of these narratives are intertwined, further complicating microcosmic changes to corporate industries, public offices, and individual lives. One major question that has been brewing for the past few years was brought to boiling point with international lockdowns in response to the widespread Covid-19 pandemic: What are we watching? And perhaps more importantly, how are we watching?

Even before movie theatres temporarily closed their doors and half the nation began binge-watching everything in their Netflix queues, the entertainment industry contended with growing concerns about the encroaching influence of internet-distributed content, or what media studies scholar Amanda Lotz calls “Portals” (e.g., Netflix, Hulu, HBO, Amazon Prime Video, Disney Plus, etc.).1 Media scholars and journalists conjecture that we may be moving into a “post-TV” or “post-network” era,2 but does this also mean the end of cinema as we know it?

Funded primarily by subscribers (rather than the legacy models of TV advertising and movie theatre box office profits), Portals are ushering in a new era of watching that simultaneously promises more viewer control as well as algorithmic suggestions that cater to individual viewer tastes. Far removed from the days of gathering around the “boob tube” or waiting in line for the latest midnight movie premiere, we now have access to a multitude of Portals through a variety of devices, blurring the lines between film, TV show, and online video into a swarm of seemingly endless on-screen storytelling.

I define on-screen stories as scripted film and television programming accessed on or created for multiple screens, including movie theatres, TVs, laptops, gaming consoles, and smart phones. For the purposes of this article I will focus on how these shifts have affected our understanding of film and television in particular, and what is at stake for the future of on-screen storytelling.

This major shift has influenced both content and form for on-screen storytelling – the rise of Portals has influenced not only what we watch, but also how we watch. Thematically, there has been a shift toward niche programming. Rather than attempting to appeal to mass audiences with summer blockbusters and holiday season Oscar bait, Portals are able to offer original films created in-house (e.g., “Netflix originals”) as well as acquired films from other media conglomerates. These Portals tend to distribute a wider variety of content compared to their risk-averse counterparts who must meet the finicky demands of box-office success. For example, horror-thriller Bird Box (2018), Oscar-nominated crime drama The Irishman (2019), and teen romantic comedy To All the Boys: P.S. I Still Love You (2020) are all Netflix original films. While Bird Box and The Irishman opened in theatres as well as online, To All the Boys is a streaming exclusive.

Netflix has the ability to finance such an assortment titles because ultimately, they all become part of the Netflix library; no matter how many times each title is viewed (on the couch or in the theatre), the overall profits still rely on monthly subscriptions rather than the success of any particular film. Legacy film and TV companies also produce diverse content, but the shift to internet-distribution allows for success outside of box office numbers, award season fanfare, and real-time viewership tracked by Neilson ratings.

Even as some filmmakers romanticize movie palaces and push back against the popularity (and award eligibility) of digital streaming,3 audiences seem quite comfortable within the expanding spectrum of on-screen storytelling. With widespread movie theatre shutdowns due to the pandemic,4 massive restructures of the entertainment industry,5 and a growing abundance of internet-distributed content, there is a concern that audiences will no longer crave the movie theatre experience.

Movies and TV shows were conceived and developed with different aims, but in recent years, they seem to be coalescing toward a kindred resemblance. Though they have separate origin stories, perhaps we should understand them within the same “universe,” much like the Marvel and DC Universes that frequently flash across our screens. Instead of clinging to established definitions, we should begin to understand how our notions of “movies” and “television” are “less defined by how the content gets to us and what we view it on than by the set of experiences and practices we’ve long associated with the activity of viewing.”6

In other words, we can practice similar watching rituals (“activity of viewing”) across different modes of watching (“what we view it on”). Lotz’s words are particularly insightful as we consider the future of on-screen storytelling: we must contend with how our watching rituals have (or have not) shifted, rather than fixate on purist categories of “film” or “television.”7

One way to explore this is by examining the relationship between our watching rituals and our ideas of community. The “specialness” of the movie theatre experience is often marked by communal aspects: sharing an evening with friends and strangers in a dark room lit by a larger-than-life screen and peppered with smells of popcorn and whispers of delight. Legacy TV touts similar selling points: audiences across the nation circle around their TVs in a simultaneous viewing experience that is further discussed around water coolers the following day. The internet-distributed models of Portals, however, seem to cater to a more individualistic approach: watch anything, anywhere, anytime. Even though we watch TV and movies separately (in different spaces as well as different places) through our Portals, we still yearn for community and seek out ways to “gather” in virtual spaces to discuss what (and how) we are watching.

For most of 2020, flocking to movie theatres was no longer an immediate option, but audiences have found other ways to enjoy communal aspects of watching. Several local theatres offered the opportunity to support the theatrical experience from home. In my own city of Denver, CO, the Sie Film Center (home of Denver Film) offered exclusive access to internet-streamed premieres through their “Virtual Cinema” (including snack boxes available for pick-up at the theatre), drive-in movies at the Red Rocks Amphitheater, and hybrid options for the 43rd annual Denver Film Festival.8 Quarantine-bound friends and families embraced the idea of “virtual watch parties” by taking advantage of platforms like Twitch, Discord, and Zoom. Soon after these do-it-yourself models took off, media companies took notice and created official versions of their own, including Teleparty (formally Netflix Party) and GroupWatch on Disney Plus.

These are co-creative activities: how and what we watch creates community, and the people in our communities influence how and what we watch. Several writers have observed the myriad of ways that watching from home during a viral pandemic has affected our watching rituals. In a poignant piece about social life during isolation, Doreen St. Félix declares that “live streaming [on social media], which once seemed to presage the dissolution of human intimacy, now looks like its preservation.”9 While some viewers experienced an overall discomfort toward people hugging and touching each other on screen (a reflection of how pandemic life instantly made us see the world through a new lens), others masochistically leaned further into content that emphasized feelings of claustrophobia, constraint, and anxiety.10

Stuck-at-home screenwriters were called upon to imagine how on-screen characters might handle the pandemic and, even more ominously, how they might write the “ending” of 2020, as if we had all been cast in a film about this roller coaster of a year.11 With ample time to research and reflect, artists and critics fuelled by decades of exclusion were suddenly sparked by this year’s nation-wide Black Lives Matter protests to dig deeper into issues of equity and on-screen representation.12 The events of 2020 have certainly highlighted our divisions, but they also reveal our desire to unite, connect, and heal.

The cyclical nostalgia of communal experiences

The ritual of going to the movies will never be fully replaced by the way we watch movies at home, just as watching the latest Game of Thrones episode feels different when you watch on Sunday night with all your friends, compared to watching it alone, several days after it airs. Even those who can afford surround sound and giant flat screen TVs, nothing can quite replicate the sensations generated by a room full of eager watchers: the urgency of arriving on time, the smell of someone else’s snacks, the anticipation when the trailers or commercials end, and the booming laughter that erupts from everyone in the room simultaneously.

Ultimately, I do not believe films are in any kind of dire state. No matter how many Netflix shows we watch, people will still want to go to the movies. We are in an improvisational age of “yes, and…”: gleefully accepting new modes and mentalities when it comes to our watching habits. We want to scroll through TikTok videos on our phones as well as buy a ticket to see blockbuster films in the theatre; we crave reality TV comfort food alongside arthouse dramas and experimental horror series. In a world where we can order dinner, drinks, and a beanbag from the couch, we are no longer concerned about whether Oscar films and Saturday morning cartoons can be enjoyed from the same spot. After all, we may be stuck in these spots for quite some time.

So where do we go from here? Henry Jenkins’ reflections on collective imagination provide guiding inspiration for the future: “Imagination is not something we consume or inherit but something we actively produce together, something we do. We can watch imagining happen; we can hear the voices of people engaged in acts of imagining. We are in the room where it happens.”13

But what kind of room do we currently find ourselves in, amidst a global pandemic, political unrest, and general unease? In this time of institutional suspicion and public distrust, perhaps now, more than ever, we should lean into the communal experiences of on-screen storytelling, where watching goes beyond consumption and into a realm of co-creative reconnection with our beloved communities.

6. Lotz, The Television Will be Revolutionized, 35.

10. Elahe Izadi, “Our TVs Are Full of Characters Spreading Germs and Now We Can Never Unsee It,” Washington Post, March 24, 2020, https://www.washingtonpost.com/arts-entertainment/2020/03/24/tv-movies-during-coronavirus/; Inkoo Kang, “Critic’s Notebook: Why ‘90 Day Fiancé’ and ‘Portrait of a Lady on Fire’ Are Perfect Quarantine Viewing,” The Hollywood Reporter, March 30, 2020, https://www.hollywoodreporter.com/news/why-90-day-fianc-portrait-a-lady-fire-are-perfect-quarantine-viewing-1287368?utm_medium=social;

12. Kyle Buchanan and Reggie Ugwu, “Why Are There So Few Black Directors in the Criterion Collection?,” The New York Times, August 20, 2020, https://www.nytimes.com/interactive/2020/08/20/movies/criterion-collection-african-americans.html