The future of cinema is the future of us all
34056
post-template-default,single,single-post,postid-34056,single-format-standard,theme-bridge,bridge-core-3.0.1,woocommerce-no-js,qodef-qi--no-touch,qi-addons-for-elementor-1.5.6,qode-page-transition-enabled,ajax_fade,page_not_loaded,,qode-title-hidden,columns-4,qode-child-theme-ver-1.0.0,qode-theme-ver-29.2,qode-theme-bridge,qode_header_in_grid,qode-wpml-enabled,wpb-js-composer js-comp-ver-6.10.0,vc_responsive,elementor-default,elementor-kit-41156 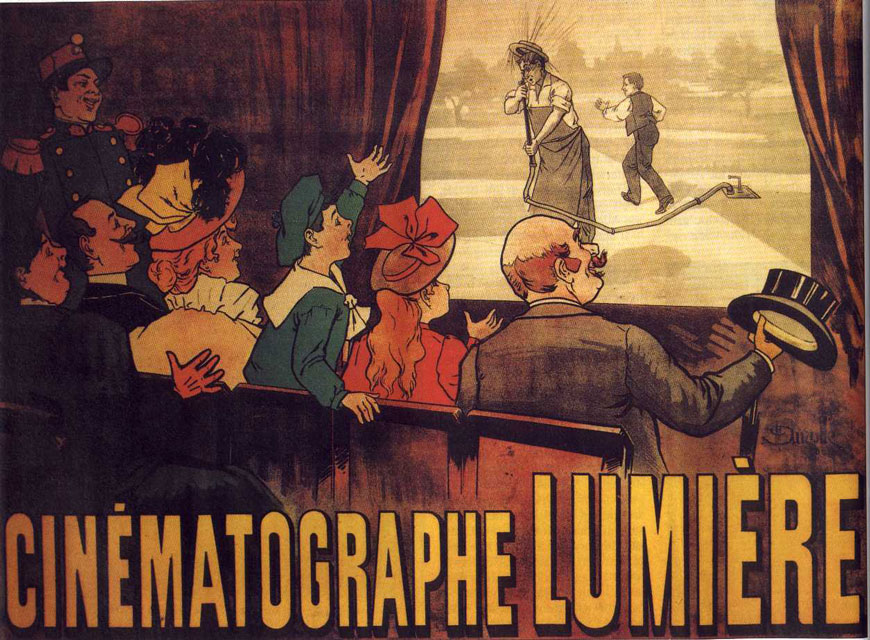 The early days of filmmaking led scholars, artists, and intellectuals of the era to engage in heated discussions on whether cinema was an artistic expression at all or merely a new form of technology and on how cinema was different from any other art.

While some like to imagine a particular golden moment in cinema’s history or the right way to do filmmaking, in reality cinema has always been a great many things, often in contradiction if not in contrast with each other. In the last one hundred and twenty-five years, we learned that film, like any other medium, can be used for very different ends: escapist entertainment, meaning-making art, totalitarian propaganda, commercial exploitation, societal challenge, historical revisionism, religious edification, and more. We have also witnessed that cinema can reflect, create, challenge, and reimagine the world we live in.

It was unavoidable that cinema would change, as any other human-made reality does. But we should not believe that there is any linear way to predict what the future will hold. We can anticipate trends, keeping in mind the complexity of reality, and knowing that the future will still surprise us, will always contain unexpected elements, some welcome and some devastating.

As we face a new wave of the Covid-19 pandemic, we know the crisis movie theaters are facing. Many never recovered from the first wave of the pandemic. But the crisis of theater-going had started much earlier, progressively brought on by television, then VHS videos and DVDs, and finally by streaming platforms. It is now possible to watch most of what we want whenever we want it, from home or almost anywhere there is a good internet connection.

The crisis of theatre-going is part of the future of cinema, yet it is not the whole story by far. While many of us will forever love the ritual of watching movies on the big screen, in the dark, and as part of an audience, as a collective event, new technologies have reshaped our lives and changed the theatre business. It is possible to imagine that theater-going will never altogether die, as small special realities will continue to struggle to exist thanks to the passion of individuals and groups that cherish the traditional cinema experience. With the advent of new technologies, we have witnessed many businesses drastically change, given up for dead, and reappear in new forms for niche audiences. People had predicted that greeting cards would go out of business because of the advent of electronic mail. Surprisingly, in the last few years, that trend was reversed, as many people are reclaiming some of the old forms of communication.

Similarly, vinyl has been making a comeback as people cherish a different listening experience. Traditional gaming circles have not been entirely replaced by online gaming. Industrial food production has not replaced artisanal food. The advent of platforms like Etsy shows how many people still crave artisanal manufacturing. Nothing can and will stay the same, yet changes, while drastic, may not mean the complete obliterations of old realities. Movie theatres have mostly not been profitable for decades and may cease to exist as profitable businesses. But communities will keep smaller theatre-going experiences alive, like The Palace Cinema, Longridge, in North West England, or the New Parkway Theater in Oakland or the Roxie Theater in San Francisco. Every local reality has its example.

Watching movies as a community experience does not need to be identified only with theatre-going or even physically getting together. During the current pandemic lockdowns, people worldwide have creatively imagined different kinds of watching parties so that they could still share a viewing experience, chat during it, and discuss after the movie afterward. Human beings are creative and adaptive, and if they keep understanding the value of communal experiences, they will keep finding ways to create them. Ultimately, the issue may be how to keep alive the spirit of connectivity than the theaters open.

In fact, because of Covid-19, in the last months several film festivals had to be canceled, and many have yet to be rescheduled in person. Yet we have witnessed how film festivals were still able to take place as people streamed movies, followed Q&A sessions online, and discussed them on social media. Some collective experiences will drastically change, only to adapt to new times and circumstances. It is possible if the passion is kept alive.

The latest experiences with online film festivals should also give us pause for thought and challenge us to reconsider if the enormous costs big international film festivals have on our environments are worth the thrill of the experience for a small minority, as rewarding as it may be. International air-travel alone is devastating to our planet, and climate disruption is significantly affecting the most underprivileged communities, usually not part of the film festival crowds. So, I hope that the future of cinema will address more issues of environmental accountability than the use of plastic bottles and utensils and include climate justice.

That point also brings me to ask whether we have a right or entitlement to endless forms of entertainment, like the variety of constant new films and series available for streaming that people are binge-watching. Cinema as business, entertainment, and art cannot be above concerns about how it may negatively and massively affect people’s lives and our planet’s well-being. The future of cinema needs to include critical ethical questions about accountability and impact.

One of the ways cinema has changed and hopefully will continue to change dramatically is that people traditionally underrepresented, erased, or stereotyped in film are progressively doing more cinema themselves. Cinema used to be ruled by white males, telling their visions of the world and their versions of history, mostly reinforcing the paradigms of oppression that put them at the top. The struggles for equal rights, liberationist movements, and the advent of digital filmmaking and streaming have enabled new groups of people to speak for themselves, interpret their own realities, correct sexist, racist, and homophobic portrayals and stories, challenging male and colonial gazes on the “other.”

This is a change that is still happening too slowly but will only continue. It is true that US and European movie studios are still largely focusing on and financing white and male stories, actors, and directors. Yet, alternative voices are not only emerging but taking center stage. I am thinking of artists like Ada DuVernay, Barry Jenkins, Jordan Peele, Dee Rees, Ryan Cogler, Aurora Guerrero, Natalia Almada, Patricia Cardoso, Taika Waititi. The future of cinema will include a much greater variety of human experiences. It will be Black, and Brown, and Latinx, indigenous, transgender, queer, and allow people to tell their stories in their own voice. The future of cinema will also hopefully be less sexually exploitative, as women of all colours write, direct and produce and refuse to be objectified.

The future of cinema may also continue to include an increasing number of independent movies funded directly by the audience through crowdsourcing, as people are willing to share resources so that more diverse and complex stories and identities can be presented on screen. Artists like Sean Baker, Mark Webber, Joe Talbot, Jimmie Fails, and Lara Hewitt brought us some beautiful stories through crowdsourcing, and there are examples of independent filmmakers doing the same all over the world. If the studio industries do not invest in people’s stories, people will because storytelling is a primary need for communities, and people need to see themselves and their lives represented with truthfulness.

As voices traditionally erased are taking center stage, we are also strongly reminded that cinema has always been a collective endeavor. In the future of cinema, we will see how the idea of the director as original auteur, lonely creator, and artistic genius will be replaced by a sounder recognition of the collaborative and ultimately always co-creative nature of cinema. It will be interesting to see the different ways that we will start hearing of art, and not only movie industry, as collective.

In addition, we have already seen examples of filmmaking that invites the audience not only to interpret, but to suggest, the development of a story, as in the case of 2018’s Black Mirror: Bandersnatch. Interactive film will be part of the future of cinema and create hybrid realities that bridge gaming and traditional filmmaking and animation. The future will continue to generate more interactive, participative, and hybrid realities.

Not only film buffs but regular movie watchers will continue to watch a greater number of international movies, as streaming platforms are normalizing the use of subtitles for international cinema, something that used to be off-putting to some audiences, like the US one. This trend will hopefully open new windows to different worlds and worldviews.

Digital filmmaking and streaming have also allowed for the production and dissemination of an unprecedented number of films of unequal quality. While people can have direct access to anything, the choice can be overwhelming. The future of cinema will need even more than before trustworthy guides and curators to help people make informed choices that support quality filmmaking, centering traditionally unrepresented voices. Theologians, spiritual leaders, and faith communities will need to keep part of these efforts to curate and guide not as a renewed form of censorship but as a way to enrich and nurture people’s meaning-making and community building.

We cannot imagine the future of cinema as one story. It will be stories plural, and it will look like the many futures of humanity.

Rev. Dr. Gabriella Lettini is Dean of Faculty and Aurelia Henry Reinhardt Professor of Theological Ethics and Director of Studies in Public Ministry at the Starr King School for the Ministry, Graduate Theological Union (GTU), Berkeley, CA. Lettini has published book chapters and articles on syncretism, theology and culture(s), U.S. and global liberation theologies, feminist and womanist theologies and liturgies, women and religion, movies and religion, religion and politics, ethics, religious traditions and the “other.” In addition, she was the curator of the translation into Italian of the Dictionary of Feminist Theologies.