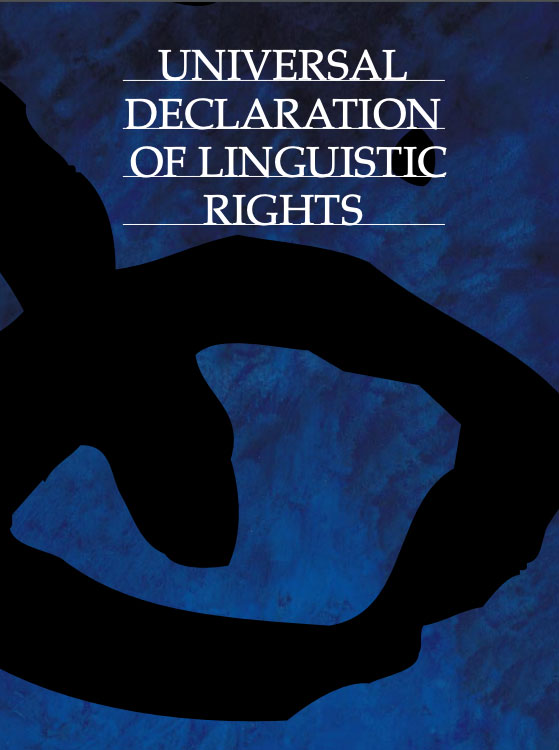 Sixty-one NGOs, 41 PEN Centres and 40 experts in linguistic rights from all over the world met in Barcelona, 6-8 June 1996. The convocation of the World Conference on Linguistic Rights (WCLR) was an initiative of the Translations and Linguistic Rights Commission of PEN International and the CIEMEN (Centre Internacional Escarré per a les Minories Ètniques i les Nacions) with the moral and technical support of UNESCO.

The Assembly of Participants at the WCLR approved the Universal Declaration of Linguistic Rights (UDLR) in a ceremony held in the Auditorium of the University of Barcelona, presenting the signed document Mr. Andri Isaksson, official representative of the UNESCO Director General.

Five years later, the Translation and Linguistic Rights Committee developed the Girona Manifesto on Linguistic Rights in 2011 as a tool to aid the dissemination and implementation of the UDLR. PEN Centres around the world have assisted in translating it into over 30 languages.

The Translation and Linguistic Rights Committee believes that translation is inseparable from linguistic rights and that the work of translators is central to the promotion of the right of all linguistic communities to be treated as equal. PEN is committed to an understanding of translation wherein all literatures, no matter how they are defined, enrich one another.

The Girona Manifesto is a ten-point document designed to be translated and disseminated widely as a tool to defend linguistic diversity around the world. At PEN International’s 77th annual Congress the PEN General Assembly approved the Manifesto.

PEN members have translated the Manifesto into various languages and encourage others to translate it into their own and to continue raising awareness about the need to protect and promote linguistic diversity. The Manifesto reads:

1. Linguistic diversity is a world heritage that must be valued and protected.

2. Respect for all languages and cultures is fundamental to the process of constructing and maintaining dialogue and peace in the world.

3. All individuals learn to speak in the heart of a community that gives them life, language, culture and identity.

4. Different languages and different ways of speaking are not only means of communication; they are also the milieu in which humans grow and cultures are built.

5. Every linguistic community has the right for its language to be used as an official language in its territory.

6. School instruction must contribute to the prestige of the language spoken by the linguistic community of the territory.

7. It is desirable for citizens to have a general knowledge of various languages, because it favours empathy and intellectual openness, and contributes to a deeper knowledge of one’s own tongue.

8. The translation of texts, especially the great works of various cultures,

represents a very important element in the necessary process of greater understanding and respect among human beings.

9. The media is a privileged loudspeaker for making linguistic diversity work and for competently and rigorously increasing its prestige.

10. The right to use and protect one’s own language must be recognized by the United Nations as one of the fundamental human rights.