The struggle for community radio in the Philippines
21350
post-template-default,single,single-post,postid-21350,single-format-standard,theme-bridge,bridge-core-3.0.1,woocommerce-no-js,qodef-qi--no-touch,qi-addons-for-elementor-1.5.3,qode-page-transition-enabled,ajax_fade,page_not_loaded,,qode-title-hidden,columns-4,qode-child-theme-ver-1.0.0,qode-theme-ver-28.6,qode-theme-bridge,qode_header_in_grid,qode-wpml-enabled,wpb-js-composer js-comp-ver-6.9.0,vc_responsive,elementor-default,elementor-kit-41156 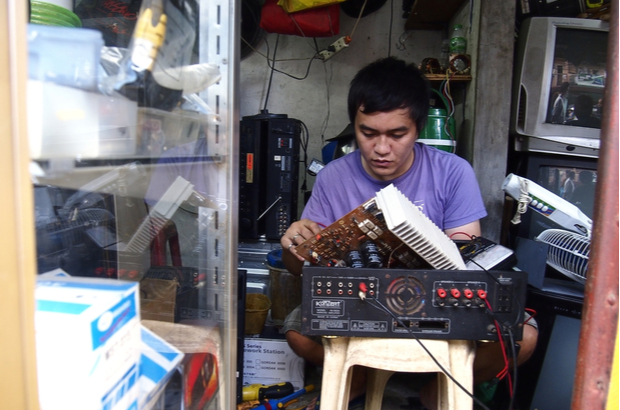 28 Feb 2019 The struggle for community radio in the Philippines

Posted at 23:24h in Media Development by wacc_kn 1 Comment

The AlterMidya Network is a national network of independent, progressive, and community-centred media organizations, institutions and individuals in the Philippines. Founded in 2014 during the 1st National Conference of Alternative Media, the network has over 30 member organizations from print, online, and broadcast media, including several community radio stations and programs in the major Philippine islands of Luzon, Visayas, and Mindanao.

In Mindanao, the Radyo ni Juan network is present not just in major cities, but even in second and third class municipalities that large commercial radio stations usually ignore. While itself a commercial outfit, Radyo ni Juan has a strong community radio component, helping to set up stations for underserved communities of farmers and indigenous peoples. An example is Radyo Lumad 1575 AM, a community radio run by the Higaonons, an indigenous group in Central Mindanao. Transmitting on 1,000 watts to cover the provinces of Bukidnon and Misamis Oriental, Radyo Lumad disseminates traditional knowledge, music and chants; as well as national and international news. Radio dramas about and participated in by the indigenous Lumad are also produced by our member outfit Resource Center for People’s Advocacies in Southern Mindanao (RCPA Productions).

Meanwhile, in various radio programs of member outfits in Western and Central Visayas, as well as the Bicol region, fisherfolk and farmers often take the microphone to air concerns on issues affecting their livelihood – such as delays in government livelihood assistance, the buying price of agricultural produce, no fishing zones, etc. They also relate cases of human rights violations brought about by militarization, which the public would otherwise not be aware of. In the Cordillera region, Radyo Sagada broadcasts in mountainous areas that are underserved by the mainstream media, and is run by mostly indigenous women. These women are also active in community affairs such as disaster risk reduction management and campaigns to end violence against women and children.

The national secretariat of the AlterMidya Network, which is based in Metro Manila, produces news and public affairs shows that feature contributions from members around the country. Unlike corporate media newscasts, the stories which appear in our newscast, ALAB Alternatibong Balita (Alternative News), are deeply rooted in the daily struggles of communities of workers, farmers, indigenous peoples, migrants, urban poor, women and youth. The ALAB newscast and public affairs shows are broadcasted to member community radio stations and programs throughout the Philippines. Being an archipelago, a newscast that spans diverse communities in several islands, and which is told in various local languages, is invaluable. Our aim is to unite people from various marginalized communities through the propagation of cultural knowledge, news, and discussion of social issues relevant to the people.

Through our stories, many similarities in problems faced by communities have emerged: land-grabbing, demolition, environmental destruction, militarization and human rights violations, labour violations, violence against women, high prices of goods and commodities, etc. Through community radio, AlterMidya provides discussion platforms that reveal the nature of such problems, and links communities to ideas and practices on how these problems can be solved or are being solved in different localities throughout the Philippines.

Making it easier for community radio
At the 4th AMARC Asia-Pacific Regional Conference, AlterMidya participated in a panel discussion on Policy, Regulation and Media Laws and Impacts on Community Radio, together with representatives from The National Press Council of Thailand, Association of Community Radio Broadcasters Nepal, Institute of Advanced Media Arts and Sciences-Japan, and Myanmar Radio and Television.

Before that, an interesting discussion had taken place during one of the workshops – participants from all over the region expressed the need for AMARC, as an international organization of community radio practitioners, to craft a policy paper that would map the community radio media policy landscape in the Asia Pacific, and come up with a set of recommendations that could be used as tools in lobbying for policies that will strengthen community radio in each country.

In the Philippines, broadcasting laws and regulations are not conducive for the proliferation and growth of community radio. Practically only public and private or commercial broadcasting companies are provided for under Republic Act (RA) 3846, or An Act Providing for the Regulation of Radio Stations and Radio Communications, which furthermore requires companies to secure a legislative franchise to operate. Imagine the tedious process one has to undergo to be granted a broadcast franchise, since it is given the same way as laws are enacted in the Philippines: a lawmaker has to sponsor the measure, it has to go through committee hearings and a discussion in the House plenary, it has to gather enough signatures from lawmakers, from where, if approved, it goes to the president for signing.

As if that were not enough, once granted a license, the National Telecommunications Commission (NTC) has to issue permits for the use of frequencies. Local Government Units also impose additional requirements for radio stations to operate.

Such a system is highly vulnerable to corrupt practices and threats of harassment and actual closure, especially in a political climate of tyranny and fear. For instance, Philippine President. Rodrigo Duterte has repeatedly threatened not to renew the franchise of the broadcasting giant ABS-CBN and the Catholic Church’s Catholic Media Network, due to media coverage critical of his administration. The NTC also decided this year to close down 30 radio stations in the Davao region for allegedly lacking permits to operate. There have been several incidents wherein the closure of radio stations was ordered by local government officials under the pretext of lacking permits, but in reality, was due to the said station being owned by a rival politician, or having exposed corruption.

If commercial broadcasting companies experience difficulties in acquiring government permits to operate, then it is doubly difficult for community radios. In the Philippines, there is no special law, nor a provision in existing laws, that mandates the government to allot airwaves for non-profit, community broadcasting; neither is community broadcasting formally defined and given recognition in law. While the NTC has issued a set of guidelines allowing the establishment of FM broadcast stations using transmitters with power of less than one kilowatt “to allow localities to have broadcast services with programming that recognizes their local needs and preferences,” it does not exempt such stations from going through the same rigorous process as that of commercial broadcast stations. This makes it highly improbable for communities to set up and run their own stations. The more common practice is for community and people’s organizations to buy time and hold programs in commercial radio stations.

According to Imam Prakoso of AMARC- Asia Pacific, there needs to be a “change in perception” towards community radio, which is still not seen as a major media actor but only as a “complement” to corporate mass media. He also related that it takes an average of six to seven years to get a community radio license; and since their broadcasting law was passed in 2002, only 200 new community radio licenses have been given. He also observed a downward trend in the number of CR stations in Indonesia – from more than a thousand stations 16 years ago, it is now down to around 500.

Meanwhile, Supinya Klangnarong of Thailand said that, while the government has a broadcasting development fund, there are many political and economic pressures that hinder the use of these funds for strengthening community radio. Subas Khatiwada of ACORAB Nepal also mentioned how narrow political interests hinder the genuine development of CR. Recently, provincial governments were given the authority to set up their own radio stations; however, it is the same authority that gives them the power to clamp down on stations.

Khatiwada made a good point regarding media policy: that at the end of the day, “It is not enough to have a community radio policy. It’s the quality of the policy that matters.” Everyone agreed that lobbying should focus on greater access to public funds, lower fees and less requirements for the acquisition of broadcast franchises, and other measures that generally guarantees the common people’s right to communication.

The AlterMidya Network, with the assistance of the World Association of Christian Communication, in 2017 crafted a draft Community Radio Broadcasting Act, which aims to strengthen people’s communication rights through community radio broadcasting in the Philippines. The proposed law formally defines community radio broadcasting, and stipulates that “concerned government branches and agencies shall make it easier for communities to establish community radio stations through the repeal and/or amendments of laws and ordinances that impede their establishment and operation.”

While the proposed law has yet to see the light of day in the elite-dominated chambers of Congress, it is at least a step forward in forging a clear policy on community radio. Local broadcasters in Mindanao, including AlterMidya members, are also doing lobbying efforts with the NTC for the issuance of special community radio permits.

Perhaps a coordinated, regional-level study and campaign for strengthened community radio policy would help community radio broadcasters and advocates in each country to more effectively face the political and economic challenges that hinder people’s voices from being consistently heard on the airwaves.