Training of Communicators with Disabilities to Build their Communication Rights
20305
post-template-default,single,single-post,postid-20305,single-format-standard,theme-bridge,bridge-core-3.0.1,woocommerce-no-js,qodef-qi--no-touch,qi-addons-for-elementor-1.5.3,qode-page-transition-enabled,ajax_fade,page_not_loaded,,qode-title-hidden,columns-4,qode-child-theme-ver-1.0.0,qode-theme-ver-28.6,qode-theme-bridge,qode_header_in_grid,qode-wpml-enabled,wpb-js-composer js-comp-ver-6.9.0,vc_responsive,elementor-default,elementor-kit-41156

Posted at 14:47h in Uncategorized by wacc_kn 0 Comments 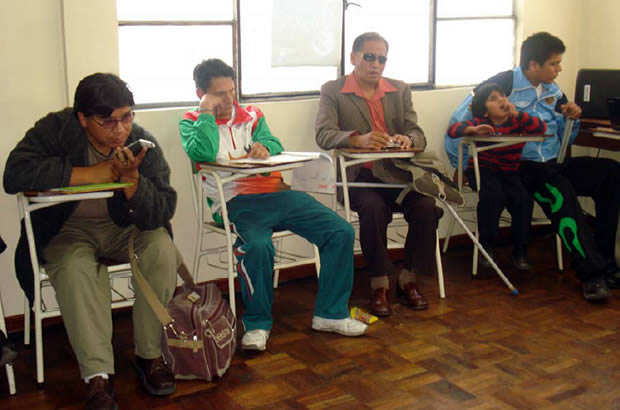 Through this project the Training Service in Radio and Television (SECRAD) addressed the social exclusion and ‘invisibility’ of people with disabilities in Bolivia by providing technical skills training to visually impaired people in the city of La Paz. Exclusion and invisibility have been a huge obstacle in the participation of disabled people in society, and a gross infringement on their rights as citizens in Bolivia. Building on the plan of action arising from the First International Workshop on Communication and Disability organised by SECRAD where media discrimination and the lack of public policies were discussed, this project sought to provide communication training for people with disabilities. The project resulted in a marked increase in the participants’ self esteem and sense of empowerment and entitlement to rights. It also resulted in an increase in the interest among mainstream media to cover issues of disabilities in a more inclusive way. Finally, there has been some opening on the part of some media to the inclusion of people with disabilities in their programming, generating in this way a stronger visibility of this sector of the population.